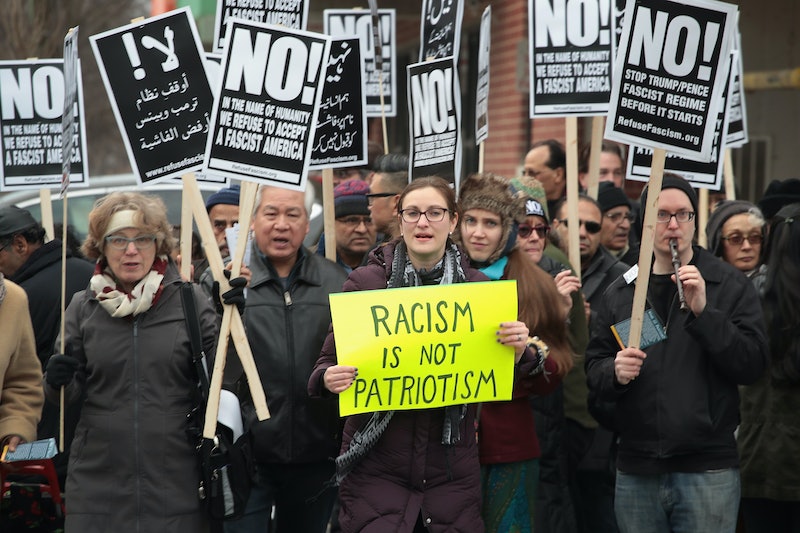 Just because the president is pretty decidedly unpopular — in fact, Donald Trump is historically unpopular, according to Gallup polls — that doesn't mean he can't win again in 2020. If you want to make Trump a four-year president, you've got your work cut out for you. Protesting the Trump administration has become a more-than-regular occurrence in this first month of his tenure, and some anti-Trump protests, namely the Women's March, drew historic numbers of participants. But many Republicans continue to support their party's president.

The list of advantages that Trump would retain in 2020 is dizzying. The Electoral College works against Democrats, incumbent presidents hold a significant advantage while running for reelection, and it isn't clear (not yet, at least) whether the Democrats are capable of coalescing around a nominee. Leaving aside current rumors around the prospect of impeachment, Trump seems poised to head into a 2020 candidacy with all the bombast and truthiness of his previous campaign.

There is one way that Americans can be sure that Trump will not extend his policies into another four years, and it's often not considered: Trump deciding not to run again. It's an uncommon decision, but it's one he may well make. Reports of Trump's time as president-elect painted a picture of a candidate who did not plan to win, who didn't expect to win, and who — possibly — didn't even want to be the president. He apparently thought he would be able to commute to the White House from New York. He thought he would get weekends off, and he was "surprised by the scope" of the presidency.

In an essay written for xoJane, Stephanie Cegielski, former director of the Make America Great Again PAC, claimed that Trump wanted to serve as a "protest candidate" and nothing more:

I'll say it again: Trump never intended to be the candidate. But his pride is too out of control to stop him now... He doesn't want the White House. He just wants to be able to say that he could have run the White House.

So how can Americans defeat a president who doesn't even want to be there? By continuing to reinforce the message that his policies and his rhetoric are deeply unpopular, Americans can make Trump's presidency nearly as unpleasant for him as it will be for us.

Luckily, even after bearing the criticism of a presidential election, Trump has astonishingly thin skin. He seems to get overly upset at parodies of his administration on Saturday Night Live, he lashed out at Nordstrom for dropping his daughter's poor-selling brand, and he lambastes the media for its accurate coverage of fairly mundane topics, like low inauguration turnout.

I sincerely worry that no amount of protest will suddenly convince Trump to take climate change seriously, or protect women's reproductive rights, or reverse his infamous travel ban. But protesting does undermine Trump's authority on an international stage. Strangely — and significantly — it also seems to hurt his feelings. His beloved brand, too, is suffering from his tenure as president. The plummeting sales of the Ivanka Trump brand indicate that (in retail, at least) Americans are uncomfortable being associated with a brand that is, to put it lightly, divisive.

Moreover, Trump's favorite part of campaigning for president seemed to be addressing large crowds of people at rallies, basking in their adulation. He doesn't want to travel the country addressing crowds of people who dislike him, but Trump supporters will likely be a lot less ecstatic when they figure out that their manufacturing jobs are still leaving the country, or that their tax dollars are being used to pay for the border wall.

Bowing out of a reelection bid might be the best solution to preserve Trump's wounded pride. A voluntarily one-term Trump could pretend to be leaving office on a high note. He could return to his previous lifestyle of luxury vacations and a private life lived unscrutinized. He could even finally create Trump TV. Ultimately, America's best chance for preventing an eight-year Trump presidency may simply be to convince Trump that being president simply isn't worth the hassle.