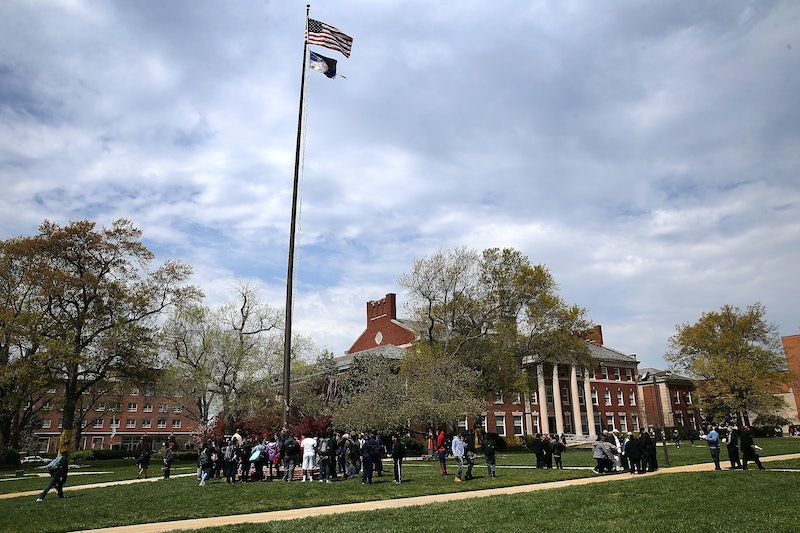 Howard University has resided in a predominantly Black neighborhood in Washington D.C. since it was founded in 1867. But gentrification in the district has creeped up on the Howard campus, too. Recently, reports about D.C. residents walking their dogs on Howard's quad, The Yard, has sparked outrage among students who tell Bustle that the neighborhood's new residents don't respect the campus and its rich history.

DCist reported last week that The Yard has become something of a recreational spot for residents in the area, with some even using it as a dog park. Soon after, a clip from a local news station about this controversy further angered Howard students and alumni. In an interview with Fox5, white D.C. resident Sean Grubbs-Robishaw suggested that Howard should "move" if students are unhappy that residents are treating the private college like a public park.

Howard students and alumni tell Bustle that the new residents in their neighborhood lack a degree of respect for the historically Black college. And this attitude, they say, is emblematic of the larger issue of gentrification in the Howard University neighborhood and the D.C. area.

"I’m OK at times with people walking through because I understand. Say it’s a nice day you want to just walk through casually and see the campus — that’s fine. But sometimes I do feel kind of, like, especially when [they're] scootering through, people are walking and people have to make sure to get out of the way for [them] to pass. So I just find that kind of disrespectful.

"Everything is catered to the new people that are moving in and not to anyone else."

"In a lot of different places, sometimes it does feel uncomfortable. Because it’s just awkward when you’re in a whole space and you’re going to this HBCU and you want to go to an establishment right down the street or a bar right down the street, and you’re just seeing different people being catered to in different ways. It’s honestly always when I'm at places in D.C. that are a little more high end, I just notice myself getting served last a lot and just not being paid attention to, and I'm kind of used to that, unfortunately. Everything is catered to the new people that are moving in and not to anyone else."

"When I attended Howard, the neighborhood was predominantly African American. So it’s been a dynamic shift as gentrification continues to hit the Shaw district. We didn’t see residents just hanging out on campus.

"Generally when you move into a neighborhood, you respect the norms and the culture of what’s happening around you. And I think that we live now in a world where people just don't care. For someone to say the campus should move — you don’t see us going to American University walking our dogs. And I'm sure if people were doing that, especially people of color just hanging out on the American University campus or George Washington campus, the police would be called. To me it’s just really disrespectful for someone to say 'you guys can just move' when Howard has been there since 1867. Like, no — you need to move."

"I'd be on campus early, because I do office hours and I have an early class. So it was about like 9, I wanna say, one morning, and there was a gentleman casually walking his dog just in front of the School of Business, which seemed a bit odd, because you usually don't see dogs on campus. Throughout then I've just seen people jogging on campus, so it's become, like, a thing. But I think the issue really comes down to when they’re treating the space as if it’s just like a playground, like a dog can be anywhere and use the bathroom, and it’s disrespectful.

"[Grubbs-Robbishaw's comment] was off-putting to say the least. Assuming that he is from this area, I would imagine he understands the history of the institution. It’s been here for over 100 years. What would make it worse is if he was new to the area. It just shows an arrogance and superiority that I think comes with a lot of the new people that tend to move to the new areas that were formerly low income. It’s just this level of — you need to do this for me, or bend over backward to accommodate me, when the thing is, this institution’s been here for years and it's catering to students."

"I've noticed the changing relationship with the surrounding community and with the institution in general. When I went to Howard in the '90s it was an open campus. I lived in an off-campus dorm, walked around campus, knew the neighbors near the dorm. What I've heard from students now when I visit is that they don't really have that kind of relationship with the surrounding community anymore.

"It feels like another level of disrespect that Black people continue to get in this country."

"They don't feel that it’s as friendly. The neighborhood has changed so much, and there’s more shopping, there are more restaurants, there’s more everything, things that come with gentrification have come to Howard. Which is great, but most students don't really feel welcomed there. So they’re not really frequenting the establishments there, they don't really feel like, despite what’s happening in the community, that they’re part of it.

"It really made me feel that despite Howard’s long history and despite the contributions of the institution, that there are a lot of people that really don't value the work being done there. It feels like another level of disrespect that Black people continue to get in this country, when we’re not valued, our accomplishments aren't valued, our contributions aren’t valued, and our place in American society is not considered to be legitimate."

"I went to Howard for the college tour, and The Yard is literally what made me be like, this is the university I want to go to. It was like a Black family reunion, I kid you not. It’s a place to congregate, it’s a place to meet up and see people and link up. ... And it’s really disturbing to know that places that we can sit on the grass and read books and catch up with each other is like, a sh*tting ground for their dogs.

"I wish they would make an effort to meet us halfway instead of trying to erase us."

"[Howard] is on top of a giant hill. I remember how exhausting it was to run up that hill to go to class. It feels like they’re going out of their way to walk on our campus just to look at what’s going on. It just feels really nosy and invasive. I wish people who moved here would try to get to know this city. Get to know the people from here. Get to know D.C.'s rich history, how it’s very Black, and it’s not just government. I wish they would make an effort to meet us halfway instead of trying to erase us."

"There was a burger place literally down the street from my dorm that up and left really fast because they couldn’t afford to pay [rent] anymore, and now they’ve been replaced by this very expensive restaurant. The old restaurant used to be open 'til like 2 a.m. Students would go there to eat after all of our dining options would close. And now it closes at 9 like all the rest of D.C., and there [are] less places to eat. And they’re super expensive. It’s not viable for students to go there. When you walk in you feel like they’re staring at you because they don’t think you’re able to afford it or able to be in that area.

"I want [the new residents] to know that we’ve been here and we’re not going anywhere. And it would make much more sense for us to work together instead of be against each other because Howard’s not going anywhere, and Howard will be here far after those [luxury] apartments come down."