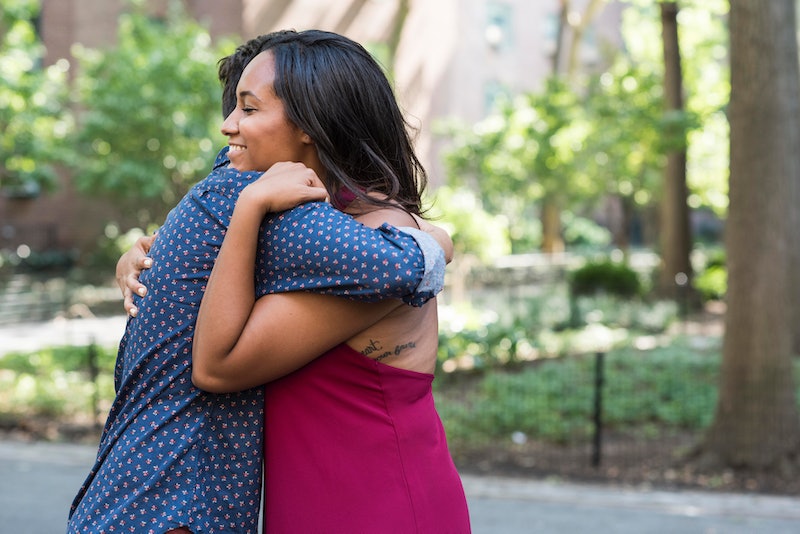 Let’s face it: Relationships have their ups and downs. Even in the best scenarios, disagreements, misunderstandings, and conflict can flare up from time to time. There’s also pretty much no one who doesn’t encounter various forms of stress on a semi-regular basis. And everyone encountering this kind of distress is 100 percent looking for something that can make them feel better after the fact. Well, according to a new study from the Department of Psychology at Carnegie Mellon University, something as simple as a hug can help calm you down after encountering a fight or stressful situation. Isn’t that just a breath of fresh air? I think so, too.

Researchers found that consensual hugs and interpersonal touch are a great way to calm down after stress and conflict. Per the new study, published in the journal PLOS ONE, people who regularly engage in physical affection, like hugging, tend to be physically and psychologically healthier overall. Researchers found that hugs help stabilize people’s moods after a fight, and also soothe the potential negative emotions that often follow a spat with a loved one. Basically, hugs are a great buffer against stress, and they can help up your mood after encountering interpersonal problems, too. According to CNN, researchers examined the relationships of over 400 people during a two week period, and found that there was a direct link between emotions, conflict, and how many hugs a person engaged in.

The Conversation notes that, per the recent study, hugs can help lessen anxiety associated with arguments and stress. Fights with loved ones are hard — they don’t feel good, and they can bring up all sorts of challenging emotions. But a simple hug can help ease those difficult feelings and diffuse the tension that fights can bring. The Conversation further notes that study participants who engaged in regular hugs reported more positive emotions and less negative ones, even when they’d had a fight, than those who didn’t. And these results were seen across all genders and age groups in the study, CNN notes, even though women were more likely to report hugs than men.

The Conversation further reports that the reasons for the healing effects of hugs might pivot on affection-induced release of oxytocin, which is a hormone linked to relationship bonding and forming trust with others. Other research further suggests that hugs have a beneficial impact on the cardiovascular system, and can help lower blood pressure, the Conversation also notes.

Study author Michael Murphy was quoted in a press release about the study as saying that, “The research is in its early stages. We still have questions about when, how, and for whom hugs are most helpful. However, our study suggests that consensual hugs might be useful for showing support to somebody enduring relationship conflict.”

And if hugs and touchy-feely ways of relieving stress are triggering or aren’t your thing, that’s totally okay — you’ve got lots of stress-busting options to choose from, too; like yoga, meditation, or getting outside for a bit. For those who like physical affection during times of stress, however, feel free to hug it out whenever hardships or conflict hit.