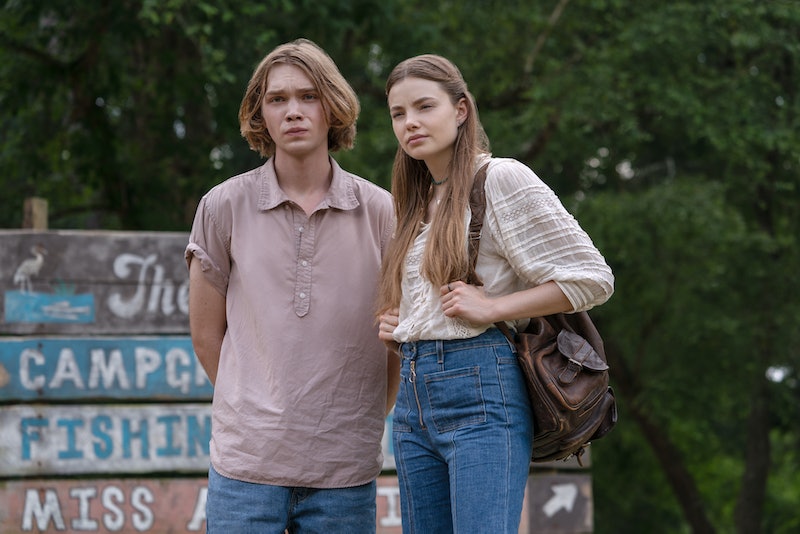 Another John Green novel is making its way to the screen. The first look at Hulu’s new Looking For Alaska series introduces the beloved couple from the 2005 novel. Like the novel, the limited series will follow teen Miles “Pudge” Halter (Charlie Plummer) as he attends boarding school and tries to gain perspective on life. Miles falls in love with the mysterious Alaska Young (Kristine Froseth) and meets a group of great friends while on his journey to seek “The Great Perhaps,” as coined by poet François Rabelais. The synopsis reads, “But after an unexpected tragedy, Miles and his close friends attempt to make sense of what they’ve been through.”

Looking For Alaska, an eight episode limited series, will premiere on Hulu on October 18. The series also stars Denny Love as Chip Martin, Jay Lee as Takumi Hikohito, Sofia Vassilieva as Lara Buterskaya, Uriah Shelton as Longwell Chase, and more in roles of the students and faculty at Culver Creek Prep. The limited-series will be helmed by teen drama veterans Josh Schwartz and Stephanie Savage, the producer masterminds behind hits such as The O.C. and Gossip Girl. Green will also serve as executive producer for the series based on his novel of the same name.

Ahead of its October 18 limited release, Hulu unveiled the first few photos of Miles, Alaska, Chip, Takumi, and Mr. Starnes (Timothy Simons), dean of students at Culver Creek Prep. In the photos, viewers get a glimpse of Miles moving into his new boarding school, Miles and Alaska staring lovingly into each other's eyes, and the core group of friends attending some type of assembly together.

Basically, Miles and Alaska's teen love will fill your Hazel and Gus void.

Looking For Alaska serves as Green’s debut novel. The author has since penned award-winning young adult novels such as Paper Towns, The Fault in Our Stars, Turtles All the Way Down, and An Abundance of Katherines. Looking For Alaska marks the author's third foray into film adaptation: Green’s The Fault in Our Stars (which starred Shailene Woodley and Ansel Elgort) and Paper Towns (which starred Cara Delevingne and Nat Wolff) have both been adapted into well-received films. The Hulu limited series marks the author’s first excursion into television.

In May 2018, Deadline first broke the news of a Looking For Alaska series adaptation. And a few months later, in October 2018, Green took to social media to share news of the casting of Plummer and Froseth as the novel’s titular couple. “I spoke to Kristine and Charlie on the phone yesterday and it was really special to have a conversation with the people who will become Miles and Alaska,” Green wrote on Twitter. “I'm so grateful to them and to everyone involved with the Looking for Alaska series. It's all starting to feel very real!”

So, what does the "unexpected tragedy" entail in the synopsis? Those who've read the novel may already have an idea. For those who haven't, Looking For Alaska premieres on Hulu on October 18. Go forth and seek "The Great Perhaps."

More like this
Watch The Trailer For Netflix’s Edgy New Comedy 'FAKES'
By Brad Witter
The 'First Kill' Cast & Fans Are Disappointed Over The Show’s Cancellation
By Brad Witter and Sophia Moore
10 Must-Read New Books Out This Week
By K.W. Colyard
Candice Brathwaite Is Over Using Her Own Life For Material
By Shahed Ezaydi
Get Even More From Bustle — Sign Up For The Newsletter