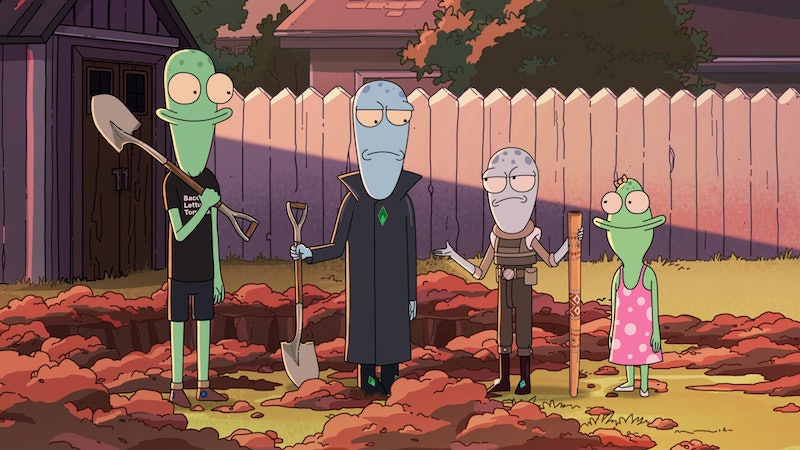 Hulu's Solar Opposites is the story of four aliens who escape their planet, crash-land in suburbia, and hilariously navigate a love-hate relationship with human culture. The show was created by Justin Roiland and Mike McMahan, two of the brains behind Adult Swim's beloved Rick and Morty — which is probably why, per Deadline, the streamer preemptively ordered a Season 2 of Solar Opposites.

Clearly, there is faith in the creators' abilities to captivate with kooky characters. According to Animation Magazine, Roiland, who co-created Rick and Morty and voices the titular duo, has been sitting on the concept for 14 years. “At some point, it was going to be a live-action series, but it never happened,” he told the publication. “McMahan and I were trying to develop another show between the second and third season of Rick and Morty, but everything we did felt really laborious. So, we decided to put that other idea down and try the odd-couple alien pitch again … and then, once we went back to the original premise, everything became very easy.”

They initially tried bringing it to life with Netflix and Syfy, but both opportunities fell through. "Then Hulu stepped in,” Roiland explained. “We then added [exec producer/writer] Josh Bycel along, and things really got moving.”

Together, they created the existence of these strange cylindrical creatures, and nothing was off the table. “It’s funny to think about humanity from the perspective of alien beings,” Roiland said. In a Season 1 trailer, the quartet explain the six stages of social distancing: discovering and consuming new TV shows, finding new hobbies, trying to move as little as possible, crushing angst over canceled life plans, a couch dance party, and lastly, losing all sense of time and trying to burrow into the ground to escape reality. Sounds about right.

According to Bycel, Season 1 was finished remotely when coronavirus quarantine went into effect. And they've already made a significant dent in Season 2. "The scripts for the second season are pretty much almost done and we were able to send home the animators with computers," he said. "It’s worked well so far, but I don’t know what’s gonna happen once we have to send our material to Vancouver to get colored and all that stuff, because we’re not quite there yet."

That being said, there's no Season 2 release date yet, but you can expect to watch eight more goobler-filled episodes soon.