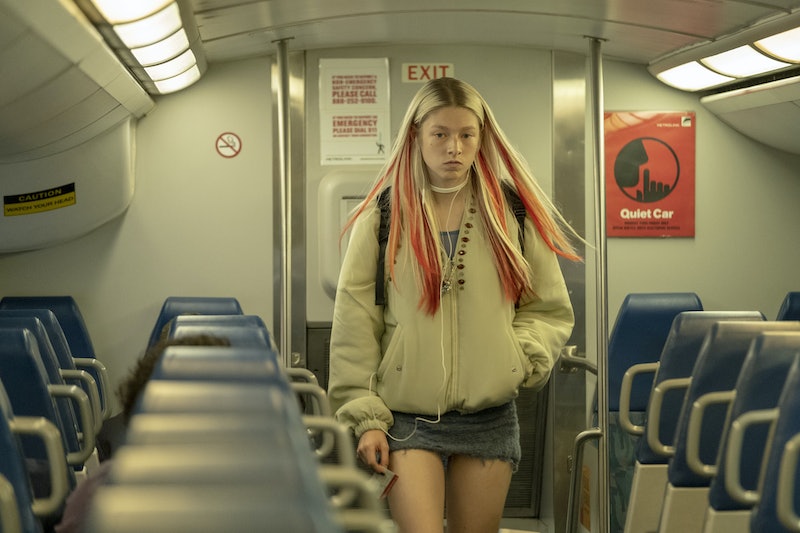 Much like some viewers of the popular HBO show, Hunter Schafer wasn't a fan of one Euphoria moment, in which her character, Jules, abandoned her friend and love interest Rue, played by Zendaya, at a train station during the final episode of the first season.

Euphoria follows high school students navigating tumultuous and often traumatic experiences with sex, drugs, friendships, and relationships. Schafer's character, Jules Vaughn, is a trans teenager who recently moved to the suburban Los Angeles neighborhood where the show is set. On Friday, Schafer discussed Euphoria at SCAD aTVFest, revealing that she also took issue with Jules' notorious abandonment of Rue, according to Entertainment Weekly. "I was really mad at Jules for that," she said. "You don’t leave your friend-slash-lover alone in a train station at 1 a.m."

The actor went on to add that Nate, Euphoria's football player villain, antagonizing Jules' played a big role in her decision to leave. Schafer added: "She’s 17 and has been through this crazy sh*t and she needs to get out. She felt really stuck."

It's not the first time Schafer opened up about about that ending. In Sept. of 2019, Schafer admitted her feelings about Jules' behavior were "pretty complicated" in an interview with Refinery29. "I wholeheartedly understand Jules’ desperate desire to be in a city where queer communities are easily accessible to her, and an energy that matches her frequency is accessible and a train ride away." She added: "But I also feel so much for Rue."

On Friday, Schafer addressed Jules' controversial split with Rue during the SCADTV festival, but also discussed her unconventional path to becoming an actor, as per EW. Schafer said that growing up she, "wanted to be a comic book artist" and that appearing on a hit tv show "wasn’t my vision for myself." Instead, she worked as a model before she "got swooped up into the Euphoria gig" via an Instagram audition. She encouraged fans to be equally open to opportunities, saying, "explore all the pathways that you may not think you are capable of."

There's good news for fans hoping to find out what becomes of Jules and Rue's friendship or romance, as in January, HBO confirmed Euphoria Season 2. The network has yet to offer more information about when the new season will air, but given Schafer and other actors' thoughtful commentary on their characters, it seems certain the new episodes will be worth the wait.