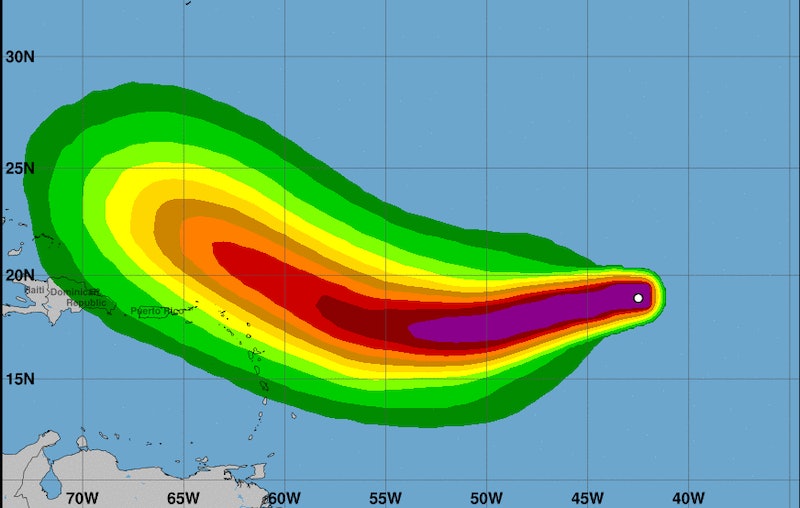 Following hot on the heels of Hurricane Harvey, one of the worst storms to hit the United States in several years, it now appears as if the east coast could be facing a similar situation sometime next week. It's thanks to Hurricane Irma, which is currently moving through the Atlantic Ocean, and threatening to reach the eastern seaboard at some point next week. As such, if you live near any potentially affected areas, it's important to take note of all available expert predictions for Hurricane Irma, so to stay informed and ahead of the curve if the worst really does happen.

It's important to remember that even the most sophisticate meteorological projections are no guarantee of what's going to happen, but they do help form a basis on which you can make decisions about preparedness and disaster planning. While there's no sense in panicking prematurely, there's even less sense in being ignorant of the potential risks.

As it stands now, as The Washington Post detailed on Saturday, models from both the Global Forecast System and the European Centre for Medium-Range Weather Forecasts (ECMWF) are showing the possibility of Irma hitting the east coast, thanks to a mid-Atlantic pressure system that could keep it from turning further eastward.

Those predictions that see Irma making landfall suggest a perilous state of affairs for states up and down the east coast, as far south as Georgia. The ECMWF model, in particular, showed Irma slamming into North and South Carolina on its way up the coast, a trajectory which would have implications all the way up the eastern seaboard into New York, Massachusetts, and even into Canada.

At present, fortunately, Irma appears to have weakened somewhat, although it's impossible at such an early date to say how powerful it will be if it indeed makes landfall next week. At present, Irma is reportedly a Category 2 hurricane, possessing speeds of 111 miles per hour. That's down from a Category 3 hurricane on Thursday, although according to the Sun Sentinel, it's expected to strengthen into a Category 4 hurricane by next week.

For some perspective, Hurricane Sandy ― the storm which hit the northeast coast of the U.S. back in 2012 ― was a Category 3, and it brought massive flooding and devastation, particularly up and down the New Jersey coast. Thankfully, only two people lost their lives, although it also racked up a staggering $700 million in damages. Although Irma could theoretically make landfall far further south than Sandy did, it could also potentially work its way up towards the northeast, imperiling multiple cities and states.

This is all a bit premature, however. Again, it's too soon to conclusively say whether any U.S. states will face rainfall and winds from Irma. But given the potential damage it could cause, this is something to keep a very close eye on in the days to come. Especially with the devastation in Texas (specifically the greater Houston area) so vivid in everyone's minds.

As such, if you're living anywhere in the storm's projected path, now might be a good time to start planning, at the very least, to stock up on supplies and seek safe refuge in case the worst happens. Hurricane and extreme weather forecasting typically gets more accurate and reliable about four or five days from the expected event, so in a few days, things should look a lot clearer.