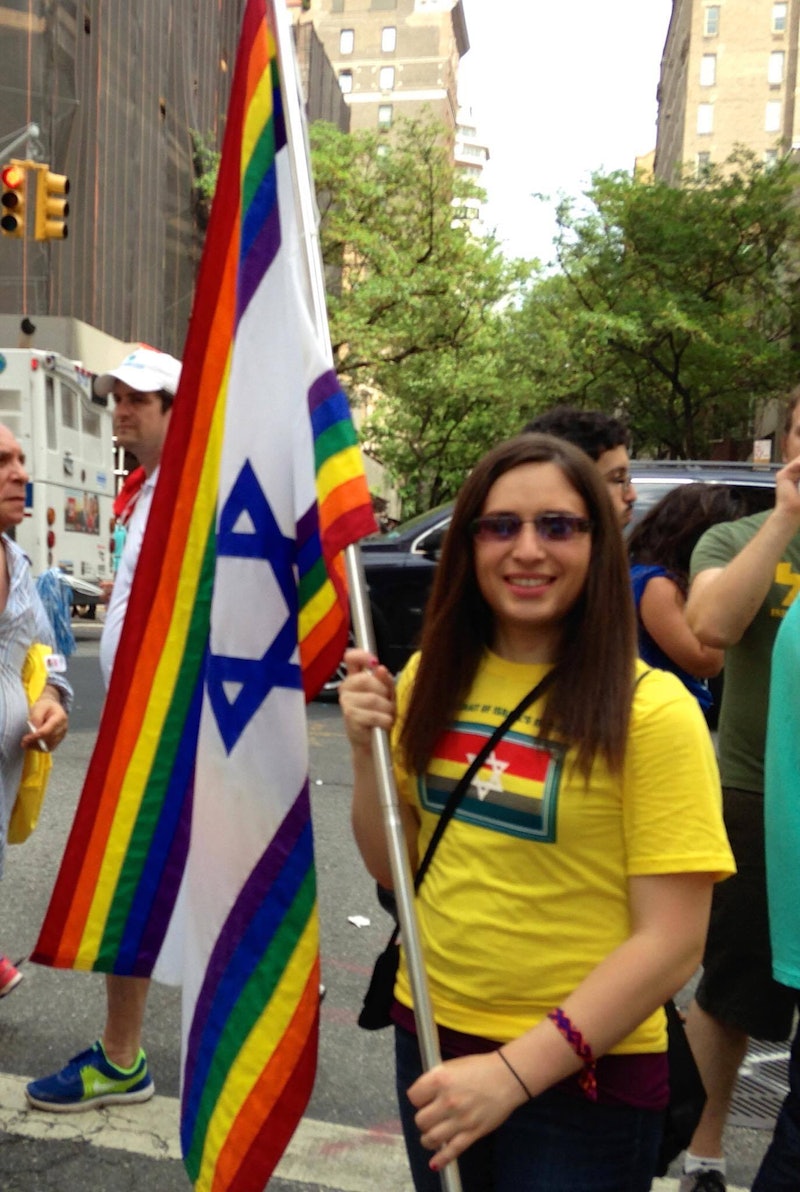 I had been looking forward to New York City's Celebrate Israel Parade on June 4, as the annual event is part of my own coming out story. I am a proud young Jewish transgender woman, and the 2013 parade was one of my first public appearances as "Hannah." Queer Jewish events gave me a place to go out as a female, before this persona was ready for prime time.

I marched with Jewish Queer Youth, a nonprofit I regularly volunteer with here in New York. It does lifesaving work supporting teens and young adults coming out, often facing unaccepting families that practice the strictest forms of Orthodox Judaism. For the Celebrate Israel Parade, Jewish Queer Youth joined other LGBTQ support groups like Keshet, Eshel, Mosaic of Westchester, and A Wider Bridge, an organization that links North American LGBTQ rights advocates of all faith backgrounds with their Israeli and West Bank counterparts. It runs life-changing mission trips to bring activists to see things from both sides in person.

However, disturbingly, the LGBTQ contingency at the Celebrate Israel Parade faced a woefully misguided, assault orchestrated by a group that claims to be for progressive social advocacy. Jewish Voice for Peace (JVP) ambushed and blocked our members.

Deceptively named, JVP recently welcomed convicted Palestinian terrorist Rasmea Odeh, who was connected to a bombing that killed two innocent Hebrew University students in 1969. They also ardently support the Boycott, Divest, and Sanctions (BDS) movement, which targets products, companies, academics, and even people with Israeli ties. Even political science professor Norman Finkelstein, a notorious critic of Israeli policies, has slammed the BDS movement because its aims would lead to "the destruction of Israel."

Operatives from JVP had infiltrated our group from the beginning of the parade route, putting on the free T-shirts we handed out. We admittedly suspected nothing, because welcoming new faces to into a safe space is precisely the point of the work our organizations do.

Around when we hit 73rd Street, individuals from JVP exposed red shirts and linked arms with signs directly impeding the path of the LGBTQ cluster, as well as our banner carriers and the sound system we mounted on a pedicab. They used their bodies to block us when we tried to proceed. I can best describe what I saw and experienced as a very threatening round of red rover, which thankfully did not last long. The NYPD's brave response prevented things from getting worse. Most importantly, nobody was injured.

JVP's executive director, Rebecca Vilkomerson, openly admitted the LGBTQ community was "carefully chosen target" in an interview with Tablet. Let that sink in: JVP openly takes aim at a marginalized, oppressed group and considers itself a progressive organization. Vilkomerson has gleefully implicated herself in this targeting of the LGBTQ community. JVP has also proudly posted video of the incident on its website.

According to JVP, as reported in the Jewish Daily Forward, seven of the protesters were arrested by the NYPD.

This attack was nothing short of hurtful and terrifying. JVP violated a key tenet of the work Jewish Queer Youth and so many pro-LGBTQ groups do across this country. We welcome new members seeking hope and community through our programming, often before they are "out" anywhere else. We emphasize being open and accepting all who come through our doors. However, thanks to JVP's violation of this trust, Jewish Queer Youth and other groups nationwide may need to scrutinize new members. Our priority is making our members feel safe, but this attack shows our openness may be abused to put our members in jeopardy.

"LGBTQ Palestinians and queer people from across the Middle East seek refuge and normalcy in Israel because their own governments, if not their own families, might try to kill them. We welcome them — and yet JVP is trying to derail our work."

There's another disturbing layer to JVP's aggression against the LGBTQ youth participating in the parade. JVP has attacked groups whose members are already sympathetic to the complexity of the Middle East. As queer Jews who struggle each day to define ourselves and thrive against otherness on account of both labels, we value social justice and any opportunity to help others. Some in our community trace family heritages to countries like Iran, Egypt, and Yemen, and speak Farsi or Arabic at home. We care about the region, and we definitely care about Palestinians. Peace is not a zero-sum game.

There has never been a generation of young Jewish teens and adolescents so driven or equipped to engage across borders and barriers. LGBTQ Palestinians and queer people from across the Middle East seek refuge and normalcy in Israel because their own governments, if not their own families, might try to kill them. We welcome them — and yet, JVP is trying to derail our work.

"To me, being supportive of the LGBTQ community includes supporting the values of Israel, as well as dreaming of a bright future for the entire Middle East."

I wish JVP would stick to building LGBTQ acceptance and democratic infrastructure in places like Lebanon, Jordan, Egypt, Iraq, Iran, Saudi Arabia, the West Bank, Gaza, and Syria, instead of focusing on bashing Israel. I fail to see anything productive or sensible about it.

As Jews, our families were persecuted and othered for centuries for our beliefs and expression, but we channeled that experience into building a modern democracy from scratch. My work and volunteering to help the LGBTQ community not only exist, but prosper despite bigotry and discrimination. They are my tangible way to appreciate Israel's heritage and add my mark. To me, being supportive of the LGBTQ community includes supporting the values of Israel, as well as dreaming of a bright future for the entire Middle East.

JVP has briefly shaken us, but let me be clear, this group will not stop LGBTQ supporters of Israel. We are eager to have fruitful, uncomfortable, powerful discussions, but we will not buck to aggression and intimidation. The LGBTQ community is resilient; we have triumphed over far worse than JVP.