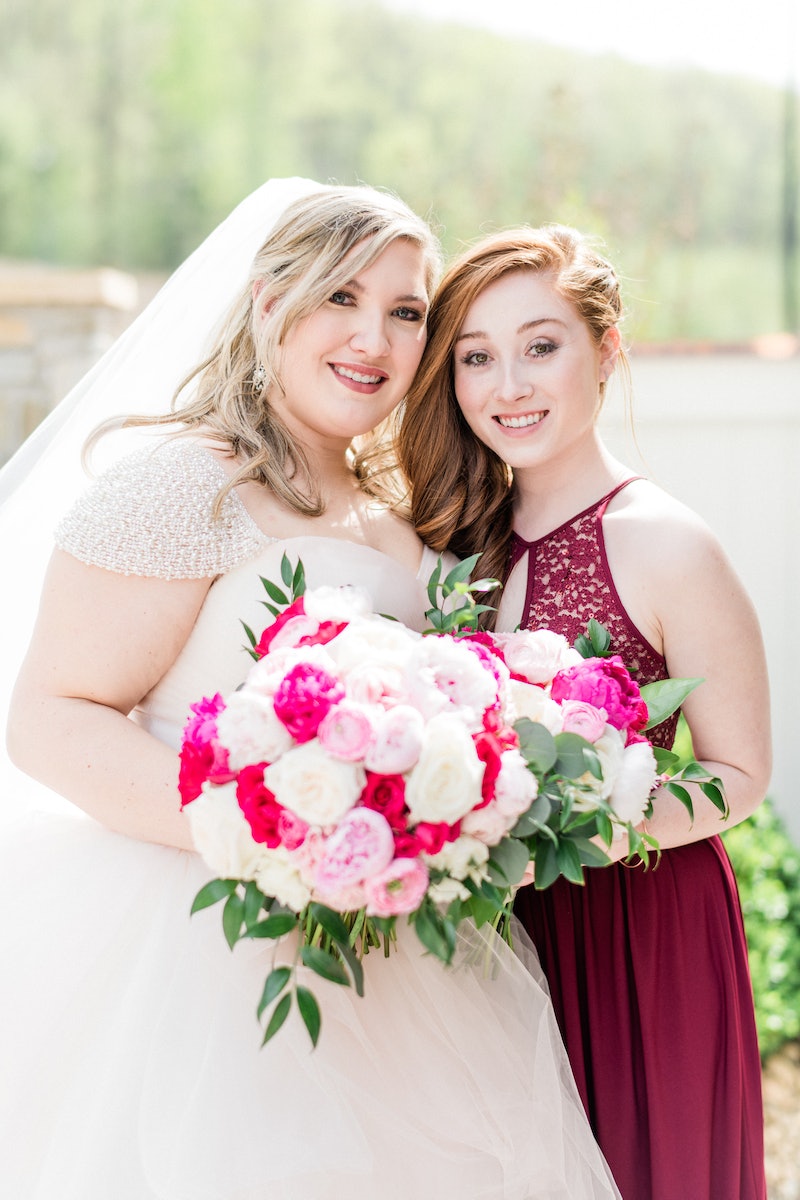 As told to Gabrielle Moss

After my now-husband, Wes, proposed to me, Lily was one of the first people I told. I wanted her to be my bridesmaid; it wasn’t even a question for me. After all, she had been my best friend for a decade — even though we had never met in person.

Lily and I met in 2008, when I was 17 and she was 15, through the Jonas Brothers’ fan page on Facebook. I would regularly chat with a bunch of other girls from all over the world about everything, but I always thought Lily was so cool. She was from California, knew actual celebrities, and had these amazing stories. She is also one of the most beautiful people I have ever met — if I could just have her hair, I would die happy. But it didn’t just think Lily was cool; she was also the most encouraging person I had ever known. She has a beautiful way of looking at life that just makes you feel good. She’s always been like that.

We would talk on the discussion boards every day, write on each other's walls, and leave each other video messages on Facebook multiple times a day using our awful webcams. Those are some of my favorite memories from my freshman year of college; sitting at my desk and going back and forth with Lily, talking about nothing and lip syncing to songs in those video messages.

We would also Skype for hours on end, until one of us was falling asleep, and sometimes talk on the phone, too — especially if one of us was going through something and really needed to talk. Today, I tell her about all my major life moments, usually via text, with the occasional FaceTime. I can clearly remember talking to her about being bridesmaids in each other’s weddings one day, long before I even met Wes.

When we met, a lot of my “real-life” friendships weren’t that supportive, but it was clear that Lily cared about me just as much as I cared about her. Talking and opening up to her was just easy. Once I had Lily to support me along the way, I wasn’t going to let that go. Plus, it didn’t hurt that she liked Nick Jonas and I liked Joe.

She was a part of our relationship from the very beginning, so of course I wanted her to stand beside me that day.

But despite our close relationship, through the years, we never met. At first, it was because we were both super young — we were still in high school and didn’t have the money to fly across the country to see an "internet friend." My family was also initially concerned about whether this person I was talking to was who they said they were — they worried it might be someone dangerous. But even as we’ve gotten older (and as my family learned that she was a real person I’d seen on video), it just never happened.

Obviously, I always wanted to meet her in person. I wanted to see her and hug her and drink way too many mimosas over brunch with her. But it was never a good time. As we got older, we both just got busier and busier. Lily was in school and then immediately hopped into work. I’m still in school, so my breaks are so scattered.

But I was OK with our friendship as it was. Our relationship was so easy and fulfilling already that I didn’t feel like I was missing much by not visiting her. I didn’t need to see her physically to maintain our closeness; the intimacy of our friendship didn’t depend on whether or not I could give her a hug.

When I started planning my wedding, though, I knew Lily had to be in it. I met my husband through a dating website, and when I began using it, I would screenshot photos of potential guys to get her opinion. I remember telling Lily about Wes and showing her his picture. I would gush to her after our dates, and told her right after we kissed for the first time. She was a part of our relationship from the very beginning, so of course I wanted her to stand beside me that day.

It just felt right, which solidified for me that she’s my best friend. Like, duh, of course this was easy. How else would it be after 10 years?

Finally meeting Lily was one of my favorite moments of my entire wedding. I walked into the church for the rehearsal and she was just already there. My first thoughts were that she was taller than I thought she would be, that her hair is even more amazing in person, and that she was even cooler in person. I immediately ran in to give her a hug. I had been slightly nervous to meet her — but more excited than nervous, actually. It was amazing to have the exact person I’d been talking to for 10 years finally in front of my face. This sounds so cheesy, but it was like an out-of-body experience. It genuinely felt like this dream that I never thought would come true.

Wes didn’t know Lily that well when she arrived, but he knew I loved her very much. After we finally “met” after the rehearsal dinner, he told me he really liked her and that he was so happy I had someone like her for a friend. My parents really didn’t care — they had known about Lily for many years, so I think it made sense to them that she’d be there. I don’t think my other bridesmaids knew how Lily and I met; they found out at the rehearsal dinner though and reacted super positively.

I would have totally understood if she couldn’t make it to my wedding. But it was so special to me that she came. Having my most supportive friend there as I made these emotional vows really just felt right. I’m a ball of anxiety most days, but having Lily there was such a calming, wonderful thing. I really don’t think it would have been the same if she hadn’t been there. The only disappointing thing was that at your wedding, there are so many people vying for your attention, so we didn’t have that much time together. Lily arrived for the rehearsal dinner, stayed through the wedding, and left immediately the next day.

After all this time, finally meeting didn’t change our friendship. I was so happy to see that we are each the exact same person face-to-face as we are over a screen. There wasn’t one second of awkwardness; it just felt right, which solidified for me that she’s my best friend. Like, duh, of course this was easy. How else would it be after 10 years?