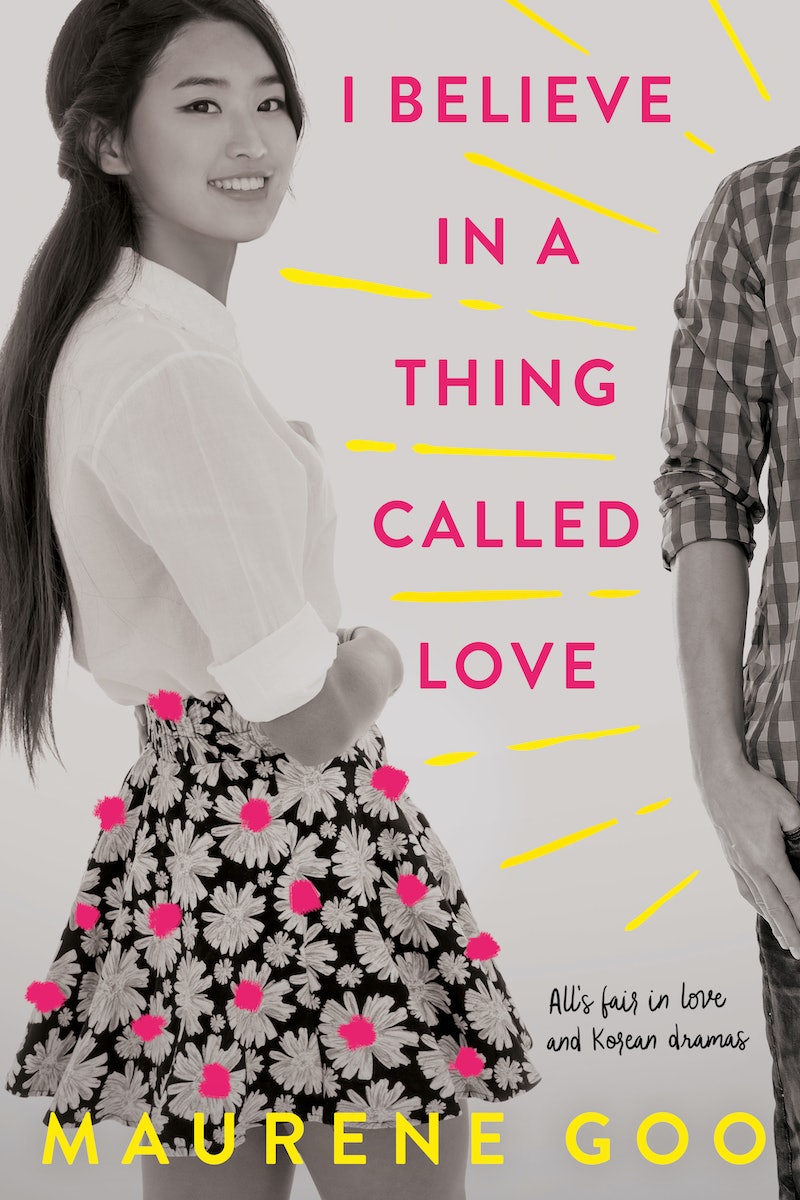 Chances are you've imagined what it would be like if you could live out the plot of your favorite, most dramatic TV series. Maybe you daydreamed about dating the hottest guy on campus, or having your first kiss in the conveniently pouring rain. But for Desi Lee, the main character of Maurene Goo's newest YA novel, I Believe In A Thing Called Love, her favorite Korean drama series aren't just a fantasy... they're a way of life.

"I’ve watched K-dramas my entire life and always joked that I’d love to make one of my own someday, following all the formulaic tropes," Goo tells Bustle. "And I also saw a huge potential for overlap between YA readers and drama fans. For YA readers who love a good romance, K-dramas are it. They are so good at romance, especially the rom-com variety. [And] K-dramas are almost always about flawed underdog characters finding love and success. That is something that we all wanted to read growing up, I think."

In Goo's literary take on the K-drama meets rom-com, 17-year-old Desi Lee is super-smart and uber-motivated...but so terrible at flirting that she's never dated anyone. Finding herself wanting to experience romance for the first time, she turns to her father's favorite K-dramas for inspiration. Soon she has created the "K Drama Steps To True Love" an intensive 24-step course of action to help her bag the new boy in school, the handsome and mysterious artist Luca Drakos. Desi begins applying her academic standard of perfection to the program to a comically absurd degree... think coordinated boat rescues, fake car crashes and juicy love triangles.

But underneath the hilarious and outlandish romance there are more serious themes, too. Goo doesn't just let Desi lie and cheat her way to the elusive perfect boyfriend without some serious consequences, and in fact, she calls into question the very idea that every teen needs to experience a romantic relationship in the first place—something that most YA seems to ignore in favor of grandiose love stories that are fun to read, but not always true to life.

I Believe In A Thing Called Love by Maurene Goo, $12, Amazon

"I often go on this rant about the 'romantic master narrative' in American culture. The idea that everyone wants to date in high school, and in adulthood, until they find 'The One.' But there are so many other romantic trajectories," she says. "And most of the women I am friends with, and the girls I grew up with, were super awkward teens, or late-bloomers, and many of us didn’t feel comfortable dating. And those stories, those experiences, are often buried by the aspirational teen dramas. So while Desi does end up dating someone in high school, I wanted her emotional journey, the maturity needed to get there, to feel realistic to readers who don’t find dating or finding a boyfriend [or] girlfriend as easy to access."

"The idea that everyone wants to date in high school, and in adulthood, until they find 'The One.' But there are so many other romantic trajectories."

And that reality, and the life-changing results of Desi's project, is tinged with a journey to self-love and acceptance; and a big part of the way that Desi finally gets there is through her relationship with her parents. Both her connection to her late mother and her Appa, who she is very close to, are explored at length throughout the narrative. While parents aren't always a key factor in young adult novels, for Goo, these connections were an essential part of the story she was trying to tell.

"I’m always drawn to parental relationships because my teenage years with my parents were so fraught. It was a real conflict and point of drama in my life so I can’t imagine writing a YA without strong parental presence," she says. "In this case, I wanted to veer away from the overbearing Asian parenting type of relationship, which I explored gladly in my debut novel, and feature, instead, a very functional and sweet relationship between a child of immigrants and her parents. Or, in this case, just her father. Although there are hints of her mother being pretty great herself."

And its that aspect of the novel, Desi's lost mother, paired with the obsessive personality traits that come to the surface throughout her pursuit of Luca, that bring forth questions of mental health; both due to the lifelong effects of loss, and to the ideal of perfection that so many teens and young adults face.

"This is a rom-com so there’s a certain lightness I was going for. But in all good K-dramas, there are some seriously sad back stories for our main characters despite their sunny appearances."

"It’s something I grappled with. This is a rom-com so there’s a certain lightness I was going for. But in all good K-dramas, there are some seriously sad back stories for our main characters despite their sunny appearances," she says. "I, personally, was not aiming for a story that was too angsty, it’s simply not in my wheelhouse. But I knew that a parent’s death has to affect a character deeply, even if she was young when it happened. I wanted Luca to help her discover that about herself while not making it too much of a 'Big Deal' because in the end, I wanted Desi to feel complete despite the absence of her mother, as a testament to her dad’s great parenting."

And if I Believe In A Thing Called Love not only made you think and inspired your feels, but led you to want to become serously invested (just maybe not quite as invested as Desi) in a K-drama or two, Goo has a list of her own for you to follow.

"I always rec 'Boys Over Flowers' because it literally has every trope in the book and is so much fun. You cannot get bored with this wacky drama. And like all good K Dramas, it hits you in the feels despite its absurdity," she says. "Another good starter is 'Coffee Prince' because…well, it’s a hot and sweet love story. I give you a pre-emptive 'you’re welcome' for introducing you to Gong Yoo."

I Believe In A Thing Called Love by Maurene Goo, $12, Amazon