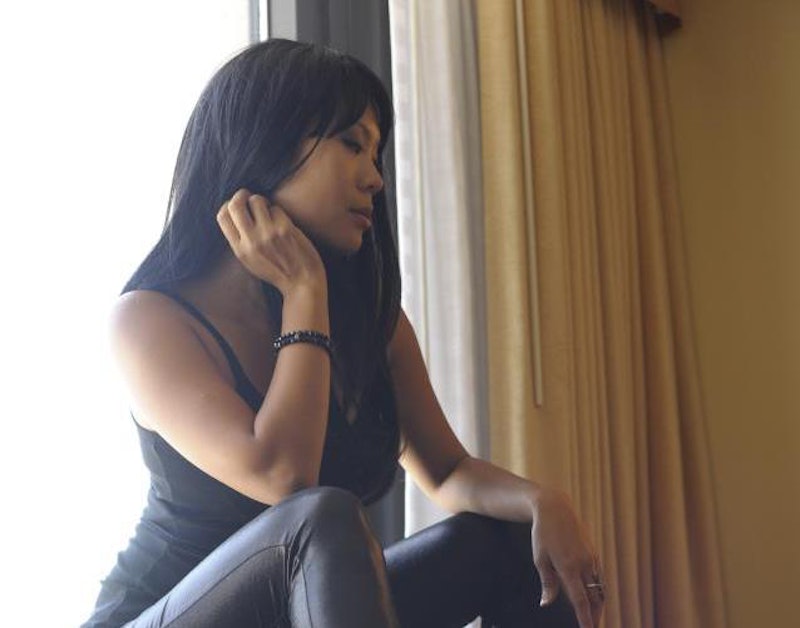 I got really jargon-y with them because their English isn't great. My parents looked as though they had no idea what I was talking about. My dad asked for an example.

"I utilize a lot of rope work where, if, for example, someone is struggling with a lot of anxiety, then I will tie them down tightly and have them breathe, relax, and release whatever is causing them worry into the rope, back into the earth where it belongs. Combining therapy/domination/hippie stuff," I explained.

My mom didn't understand, and asked what I wore. A pencil skirt, a button down shirt, and sometimes leather opera gloves, I told her. She asked if I wear gloves because I'm cold. My dad didn't want to talk about it anymore. He was starting to know, but didn't want to know.

I was devastated. I'd spent so much of my life trying to please my parents, and my father, to-date, has never said, "I love you," or, "I'm proud of you." All I got was, "You're not good enough. You better do this." But I loved what I was doing. I loved who I was.

I accidentally stumbled into the world of domination. Yet it completely, forever changed my life in every way, and I'm infinitely grateful.

I was on the law track initially because I could only be a a doctor or a lawyer, according to my parents. No other professions existed. Once I started working in law, I felt like my soul was being sucked away. I began volunteering with the Suicide Prevention Hotline, to feel like I was contributing positives into the world in some way. I came to recognize that there's a lot of pain and suffering in the world, and I wanted to do something to alleviate it.

I left law to get my Marriage and Family Therapy License at USC. My parents said if I wanted to be a psychotherapist — which, to them, wasn't a real job — then they were going to forever revoke financial support. I reached out to all my friends for help and applied for a loan. I was short $20K. There was one person, my former psychology professor, who reached out and said his friend might be able to mentor me. When I asked what it was for, he suggested I go meet her.

I drove to a ranch-style home in West LA, with a white picket fence around it, literally. A woman interviewed me and then said, "OK, It seems like you'll learn quickly. I love that you're going to be in the field of psychology, because that's what this work is, and I'm going to train you." I asked her what I'd be doing and she said she'd show me my office.

I was raised conservatively Christian. My parents are born-again. They came here Buddhist and then converted. I grew up thinking I'd be a virgin until I was married. I even forged my own sex education slip because my mother told me we don't need to know about these things. Sex was off limits.

What I love most is not even about the things that are done, but about the fact that people can be more of who they are.

Even though I didn't fully understand what I was seeing in the dungeon that day, I had a feeling that it was something new I'd like to learn about. My mentor suggested I sit in on sessions to watch for $50/hour first. "Sign me up to watch," I said.

After a couple of weeks, I became completely fascinated. "I can do all of these things," I told her.

In the beginning, I tried everything to figure out what I liked and what I didn't. I did one race-play session, and I decided I'd never do it again. I've been racially discriminated against before, and it didn't feel good to do it to someone else.

You find out in the dom-world what works for you, and what doesn't. I love the playfulness, the exploration, the discovery. I love introducing people to new things. What I love most is not even about the things that are done, but about the fact that people can be more of who they are. I had a client, for instance, who cross-dressed in sessions with me. He loved dressing up in a school girl outfit and dancing to Britney Spears, and he came from an extremely conservative background that would have condemned him — or worse — for this exploration and expression of his femininity. After one session, he told me he needed the sessions to be able to express this part of who he is safely. At that very moment, I realized this work is about more than what it appears to be on the surface. What I'm doing is important, and what I'm doing can be sacred, in my opinion. And I was going to keep doing it as long as it felt right.

I see a lot of parallels between the world of BDSM/domination and therapy. Obviously, one is not the other. But in both realms, you're providing a safe space where people can be all of who they are, without judgment. It's a celebration of these parts that we normally hide from the world.

I've had an interesting evolution in my personal journey with sex, too. My introduction to sex was violent and shitty. I was sexually abused by a family member when I was six. I lost my virginity to a violent rape when I was a freshman in college. After a sexual trauma, survivors can become hyposexual or hypersexual. I became hypersexual. I didn't care about my body. My most erotic fantasy at the time was that I'd have sex with everyone, and maybe one day, there would be someone who looked at me and asked, "Do you actually want to do this? Maybe I can just hold you." But it never happened. For a long time, I was using sex for validation, control, and to prove that I was lovable and worthy, because I felt like it was all I had to offer. Interestingly enough, when I became a dominatrix, I realized I had agency over my sexuality. It was one of the first experiences in which men respected my no, or my again and again, and again. I would start noticing if something would be exciting for me. Oh, I like having my feet massaged and worshipped. This is good. I started re-wiring my brain in a way to own my own pleasure, as opposed to someone taking pleasure from me. I was able to completely rework my relationship with sex and intimacy, to a point where I can choose what happens to my body now.

I started getting requests from people who knew me to speak as a dom at retreats, teach about power, or talk about how to take control of the bedroom and the boardroom. It progressed naturally, but what shifted my role most significantly was that I had the opportunity to mentor a few women in their erotic mastery. More and more, women who didn't want to be a dom but wanted to understand how they can have more control over their sexuality and feel confident in knowing what they wanted were approaching me. And then men, too. I worked with one recently, who after 50 years and a divorce, realized he didn't know what he wanted in bed. People don't know what they don't know.

As a kink coach, I'm helping normalize things and showing people that, guess what? You're not a freak. You're a human. It's OK to play as humans. That's what we're naturally inclined to do before society, and religion, and every culture imposed all these rules and regulations on us.

I've experienced "You get it, girl!" support and been rejected by people I've gone on dates with, who've asked what's wrong with me. I've dealt with guys who believed the stereotype of Asian American women being submissive. I am not like that, and that, coupled with being a dominatrix, freaked them out. I didn't fit into their cognitive schema of what an Asian American should be, so they'd run. Which is fine, because who you are will attract the right people and repel the wrong people. I lost a wave of friends, a group of Asian American girls that I had in LA for a while, who didn't agree with what I do.

There was a lot of rejection, and there was a lot of heartbreak, and there's been lot of questioning along the way. But at the end of the day, I had to stay really true to who I am. The dom world is one of the most healing and incredible realms that I've ever experienced in so many ways — the trust, the intimacy, the boundaries.

If the world of pro-domination became obsolete because everyone got honest with what they wanted and got it, great. Sex workers provide a really valuable service, but just think about the possibilities if we could just talk about sex more and know who we are and what we want, and had the chance to explore what that might be. Wow, how much of a better place would this be to live in?

It's been a pretty incredible experience as an Asian American dom, and I have a really great network of other Asian doms. If there's anything that can be done to break stereotypes about what being an Asian woman is, about what being a dom is, I'm here for it; we're such multi-dimensional humans, all of us, regardless of race, ethnicity, or gender. I hope we can collectively move forward to acknowledge the history of why we are where we are, and then really define it for ourselves instead of allowing ourselves to be defined by anything externally.

As told to Bustle's Deputy Lifestyle Editor Michelle Toglia. This interview was edited for length and clarity.