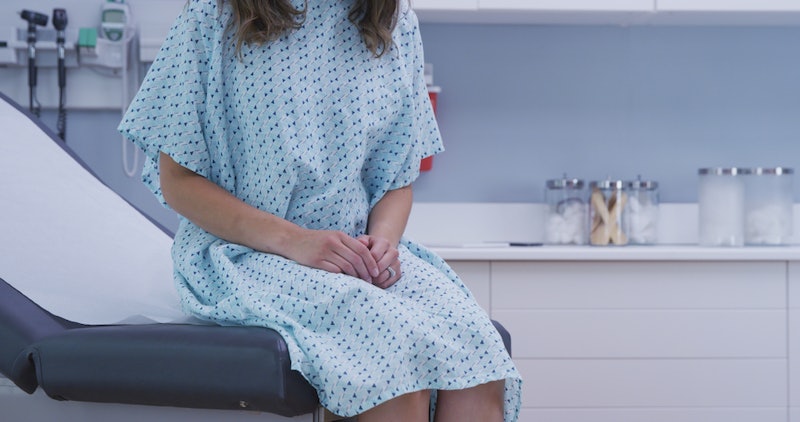 In this op-ed, writer Bridjet Mendyuk explains the process she went through to get an abortion in Ohio, where laws restrict people's access to the procedure.

I felt the first moment of panic as the word “pregnant” popped up on the ominous stick. I had no health insurance, had just lost my job, and was living at home. It was late November, and I felt better than I had in months: I was sleeping eight hours a night, and I had lost weight. It wasn’t until I told my mom my cycle was later than normal that she bought me a pregnancy test. At 27 years old, I found out I had been pregnant for two months and had no idea.

“I’m not ready to be a mother,” was my first thought. The second was pure dread over the uphill battle it would be to get an abortion in Ohio, one of the most restrictive states for abortion care in the country. In the state of Ohio, there are seven clinics that perform surgical abortions. There used to be more, but over the last decade, all but a few have been shut down or closed their doors.

The oppression of state politics began to dig their claws of guilt into me.

I called various clinics and was able to make an appointment with Planned Parenthood a few days later, because they had a cancellation. My support system made me feel like I was not alone in my decision. Several women in my life have had abortions — some of them have had more than one — which I didn't know until I told them that I was pregnant. I wish I had known sooner that abortion is normal.

Nearly one in four women in the United States, that's 23.7 percent, will have an abortion by age 45, according to the Guttmacher Institute, a research organization for sexual and reproductive health. But Ohio doesn’t provide easy access for people looking for abortion care. There are 25 times as many crisis pregnancy centers in Ohio as abortion care clinics; over 150 of them operate as women’s health clinics in the state.

These centers are “well known for distributing distorted or completely false information about a number of reproductive health issues, from abortion to condoms to STIs,” according to the nonprofit Unite for Reproductive & Gender Equity (URGE). In Columbus, where I live, these mostly religious centers stand next door to legitimate abortion and women’s health facilities.

Abortion is “severely restricted” in the state, according to NARAL Pro-Choice America. Ohio law stipulates that I would have to have two appointments: In the first appointment, I’d be given an ultrasound and counseling materials meant to coerce women into continuing their pregnancy. I’d also be told descriptions of the fetus and its chance of viability. Then, I would be required by law to wait at least 24 hours until having a second appointment for the procedure.

The oppression of state politics began to dig their claws of guilt into me. Having a baby crossed my mind more and more every day, simply because I didn’t want to go through the hoops Ohio forces people to jump through to get abortion care. Being a mother and being pregnant is something I want in the future, but I was in no way ready to be the mother I had always dreamed of being.

It seemed like the local Planned Parenthood was low on staff and open appointments, because my first visit included hours of nervous waiting. I looked around the room. There were mothers with their daughters and anxious couples. According to the receptionist in the office that day, the waiting room also had people who traveled from towns four to six hours away in states that lack women’s health care facilities. After the poking, testing, probing, and questioning, I scheduled my surgical procedure for the earliest available appointment, which was more than a week later. I was given the family planning materials and other medically unnecessary information mandated by the state of Ohio. The doctor told me I was eight weeks pregnant.

Ohio politicians have recently pushed for a so-called “heartbeat bill" that would outlaw abortions once a fetal heartbeat is detected, which is around six weeks into a pregnancy. The bill was vetoed last year by then-Gov. John Kasich, but the new governor, Mike DeWine, has promised to sign it into law. Many women, like me, aren’t even aware they are pregnant by the six-week mark. If the "heartbeat bill" been in effect, I would have had to carry that pregnancy to term.

This decision is not an easy one to make, yet the laws in Ohio are stacked against women to force them into carrying a pregnancy to term.

I spent the next week laying awake at night, wondering about motherhood, about my future, about the women in my life who went through this but never spoke of it. The societal shame of it all was overwhelming. I felt worthless when I thought about the religious groups picketing and shouting “save the babies” outside of the clinic’s gated entryway as I left my first appointment. When I scheduled my second appointment, all I could think about was how I had to wait again.

While the decision to terminate my pregnancy was mine alone, I had nightmares of being denied proper access to a safe abortion right up until my second appointment. Having an unwanted pregnancy in a restrictive state is terrifying. In fact, the day before my second appointment, Kasich did sign a bill to ban one of the most common abortion methods, dilation and evacuation (D&E). Had I waited longer to take a pregnancy test, I could’ve been in my second trimester, which is when D&E is most often performed, when I found out I was pregnant. What then?

I was petrified as I was safely escorted into Planned Parenthood for my second appointment right before the holidays. The staff members inside were attentive, comforting, knowledgeable, caring, and careful. I felt safe inside the unassuming building, even while anti-abortion activists were chanting mere feet beyond the walls. I opted for a mild dose of general anesthesia to ease my emotions. A surgical abortion, which to be clear is not a D&E procedure, also uses local anesthesia to open the cervix and a small vacuum empties the contents of the uterus. Within minutes, my procedure was done.

As I sat in the recovery room under a heated blanket, a woman to my right was waiting with her head in her hands. I wondered, did we feel the same waves of shame or guilt? Did she also fear for her future if this were to happen again?

The decision to terminate a pregnancy is not an easy one to make, even when the laws in your state aren't stacked against you. I feel lucky people supported me both financially and emotionally in my decision. But so many women in the United States don’t have this luxury. According to NARAL Pro-Choice America, 56 percent of Ohio women live in counties with no abortion clinic. Ohio abortion providers and clinic owners are harassed, while the laws in the state shame, pressure, and punish women for their choice.

My mother told me, “abortion is nothing to be ashamed of." Abortion is health care. I am not ashamed. If anything, I am invigorated to help others. I hope to find peace with my decision without the burden of political discourse, and I hope others can, too.

If you or someone you know is struggling with an abortion decision, contact the National Abortion Federation hotline or Exhale’s abortion talkline for counseling.

More like this
The Most Powerful Photos From The Weekend’s Abortion Rights Protests
By Melanie Mignucci
How Getting An Abortion Has Changed From The ’60s Through Today
By Amanda Chatel
Why You're Seeing Green Bandanas At Abortion Rights Protests
By Lexi Inks
How To Fight For Reproductive Rights, Based On How Much Time You Have
By Courtney Young
Get Even More From Bustle — Sign Up For The Newsletter