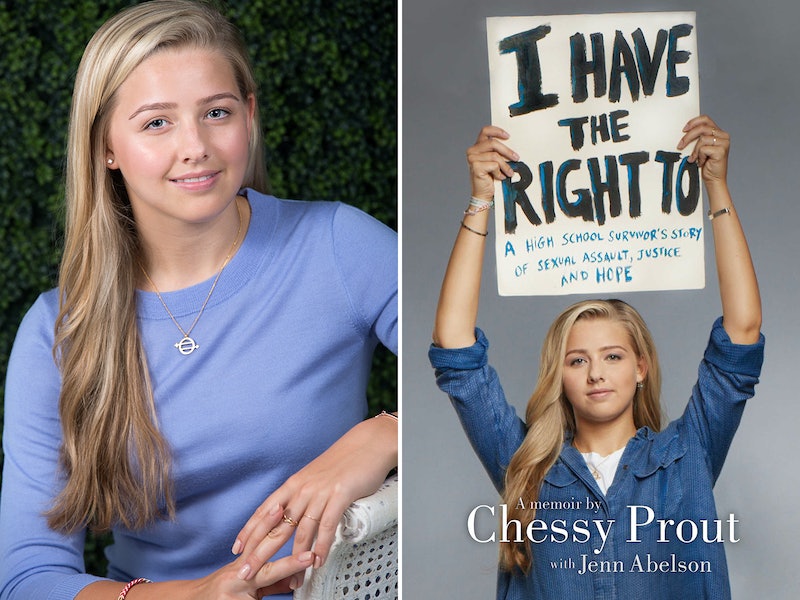 Chessy Prout has a right to a future. The 19 year old, who was sexually assaulted at age 15 while a student at New Hampshire's St. Paul's School, has became one of the most prominent faces of the movement to end campus sexual assault in the nearly two years since she willingly shed her anonymity and launched her #IHaveTheRightTo campaign. Her new book, also titled I Have The Right To: A High School Survivor's Story of Sexual Assault, Justice and Hope, is one more step toward her ultimate goal: To reclaim her own future, and empower other survivors to do the same.

"One of the reasons why I wanted to write this book in the first place is to show the vulnerability and humanity behind the word 'victim' or 'survivor,'" Chessy Prout tells me over the phone, in an interview conducted a few days ahead of the memoir release. "So you can be vulnerable and weak sometimes and feel extremely strong other times — and feel empowered by your own vulnerability."

Although her attacker, Owen Labrie, was convicted on three misdemeanor statutory rape charges, a misdemeanor of endangering a child, and one felony charge for using a computer to lure a minor for sex, Prout was, unsurprisingly, the one shamed in the court of public opinion. As she describes in the memoir, lawyers for St. Paul's School asked a federal court to force Prout to shed her anonymity and bar her family from discussing the case publicly. And, as was widely reported at the time of the trial, $100,000 of Labrie's legal fees were contributed by prominent alumni of the institution. ("I feel that this star SPS student---recognized by the faculty with the school's character awards---deserves a robust and competent defense," a St. Paul's parent wrote in an email to fellow alumni soliciting donations for Labrie's fees.) One can deduce from Prout's recollections and reporting that St. Paul's School, a 162-year-old institution, has a much more vested interest in preserving their reputation than in protecting the rights of survivors.

I Have the Right To by Chessy Prout with Jenn Abelson, $12.91, Amazon

In painful detail, Prout describes both an administration and student body that actively perpetuates cycles of rape culture and undermines survivors. Prout, both the daughter and younger sister of St. Paul's alumni, was assaulted by a student who was participating in a ritualized game called the "Senior Salute," in which senior boys are tasked with luring younger girls into sexual acts. She describes Facebook pages with names like "Slayers Anonymous" that existed for the purpose of tracking these sexual encounters. She also writes about the negative reaction from fellow students — including students she considered her friends — after she came forward with the accusations. "Chessy, the assault isn't what's going to hurt you the most," her Uncle Ron counsels her at one point. "It's the betrayal from friends and people you trust that will have the biggest impact on your life."

"The truth hurts sometimes," Prout says, when I ask her if she hopes her book will help change the culture at her former school. "I think that St. Paul’s should be forced to confront their past and their truth and their history and their current history of rape culture. I’d hope that through my book and through shining a light on my singular experience there, will help to do that, will help bring on the pressure. Bring on the pressure for them to change their ways — to help students feel empowered to say, ‘OK, this is not our culture anymore. We are going to change this ourselves, if our administrators can’t do it themselves.'"

Prout, however, is quick to note that this book is not about settling scores or taking control of her story. She calls her memoir a "love letter to survivors" and tells me that she hopes her truth will be a comfort and an inspiration to other survivors.

"I know that I have no control over what people say about me, but I have control over how I live my life and how I choose to interact with other people," she says. "And so I’m choosing right now to share my truth and hoping that it empowers people young and old around the world to speak up and use their voice and claim their rights."

In spring 2017, Prout graduated from high school, and in autumn 2018, she will matriculate at Barnard College, an all-women's liberal arts college in New York City. She plans to use the remainder of her gap year to continue her activist work. In addition to the memoir, Prout is the co-founder of #IHaveTheRightTo, a campaign that seeks to help survivors and their families navigate the aftermath of a sexual assault, including the complex mechanisms of the judicial system. She also plans to campaign on behalf of promising anti-sexual assault legislation – like Marsy's Law in New Hampshire, a proposal which, if passed, would give victims more rights in the criminal justice system — and on behalf of preventative measures, like K-12 consent education. "It’s never too early to learn about respecting others," she tells me.

"My story might be one of a young girl growing up, but I truly believe that there are messages that men need to hear, boys need to hear, parents need to hear, anybody who has an interest in protecting and nurturing children — teachers, administrators, anybody — should read the book and realize that these conversations need to be happening younger and that it’s OK to talk about these things. Sometimes I say that the burden of knowing that sexual assault or bad things happen is less than the burden of having to deal with it," she says.

In one particularly haunting passing from the memoir, Prout recounts her experience watching a separate sexual assault trial play out — that of Brock Turner, a Stanford student who was convicted on three felony charges of sexual assault, yet sentenced to just six months in prison. Like Labrie, Turner was portrayed as a "star athlete" and golden boy with a bright future ahead of him. (Prout notes multiple times in the memoir that the futures of the attackers are often valued more than the futures of the survivors.) Turner's victim, who was never identified and referred to simply as "Emily Doe," wrote a letter, read during his sentencing and later published on Buzzfeed in June 2016, that detailed the brutal emotional, physical, and legal fallout of the attack and re-centered the story of sexual assault as one where survivors are valued more than their attackers. After reading this letter, Prout was inspired to write her own — addressed to Emily Doe. "If you ever want to talk to somebody who may have a tiny sliver of understanding (and a penchant for social justice)... I want to eventually build a web of survivors so strong that can be there for every young woman enduring a trial in the US, and maybe even try to stretch is overseas," she wrote, adding: "I know it's a little grand, and there are plenty of victim advocates, but I'm a 17 year old with millions of dreams!"

Now, two years later, Chessy Prout is 19 years old, college-bound, with a million dreams and nearly as many plans. And this book is just the first step.

“We fully support Chessy’s trailblazing work to give a voice to sexual assault victims. Chessy bravely stepped forward to address an issue important not just to schools, but to the entire country.

The administration worked closely with Chessy’s parents to try to make her return to school a good one, and fulfilled their request to keep Chessy’s identity confidential from teachers and fellow students. We feel badly about Chessy’s experience when she returned, and the administration did everything it could to support her.”

“The senior salute – something similar to asking someone out – was never a tradition and was not about assault or coercion. The school has no tradition or culture that would ever allow or condone what happened to Chessy. We teach students about sexual assault prevention, and have worked hard to improve this training over the last few years. We are unaware of any student who shared Chessy’s experience with the senior salute, and if any student did, we hope they feel comfortable sharing that with us.”

“Over the last few years, our school has worked hard to understand its past, being transparent about bad actors and the failures of past administrations. We have turned this knowledge into action – ensuring we never repeat our past mistakes and providing a safe and nurturing community for our students.

We have brought in national experts in sexual assault prevention to recommend how we could improve our curriculum, followed their recommendations, and put additional policies and programs in place for both faculty and students. And, we continue to partner with the University of New Hampshire’s Prevention Innovations Research Center and the Crisis Center of Central New Hampshire to improve our curriculum.

The school’s culture does not condone or tolerate what happened to Chessy. We teach students extensively about sexual assault prevention, and have strengthened our robust programs on health, wellbeing, and mutual respect. We are dedicated to our mission of educating students in an environment that is safe and welcoming for everyone, and we are constantly working to improve it.”