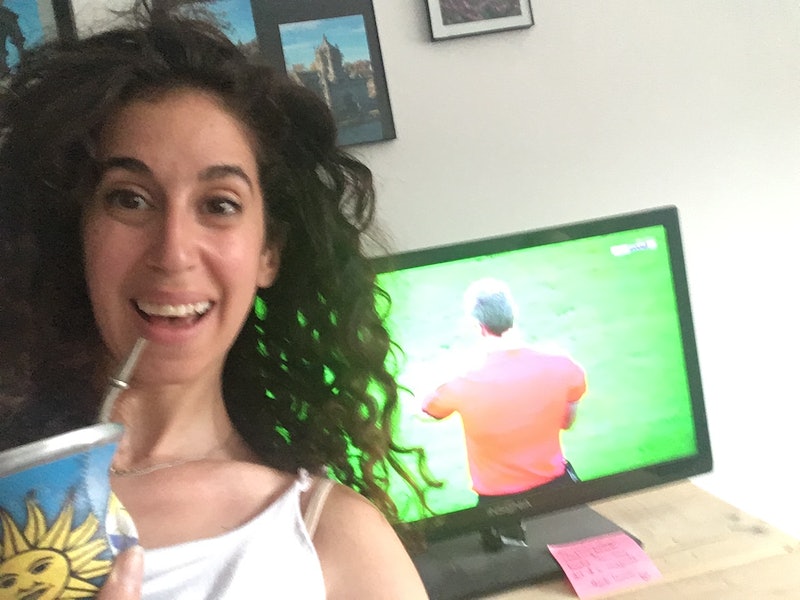 For a portion of my childhood I was fluent in no languages, a product of anxiety that was almost physically painful and two languages —English and Spanish — that were constantly jockeying for position in my brain. But what I have always been fluent in, is fútbol. And fútbol is the national language of Uruguay.

I grew up in both New York and New Jersey (though I still can’t tell you the exit on the New Jersey Turnpike) speaking Spanish at home with my Uruguayan father. In the Venn diagram of my life, there was always something preventing the pieces of my identity from coming together to form a perfect circle. Try being a vegetarian in a nation where cows outnumber people and see how quickly your grandmother tells you the reason you don’t have a husband is that you can’t cook him beef (one day I will write and star in My Big Fat Uruguayan Wedding).

In my Jewish-Latinx family (no really, we do exist!) my “Feminism is my Second Favorite F Word” shirt wasn’t considered appropriate attire at bat mitzvahs or quinceañearas, and I learned to adapt or adjust my opinions to keep the raised eyebrows or head shaking to a minimum. If I didn’t want to disappoint my family or, worse, be disappointed by their responses, it was best not to bring up Uruguay’s dictatorial past or America’s less-than-democratic present. And on the occasions when my anxiety did rise up to tangle my English with my Spanish, it caused a flood of shame that I was somehow neither here nor there, ni acá ni allá. Better just to keep quiet all around.

But with fútbol, I wasn’t an oddity or an outcast, an "other" or a "not-quite." With fútbol I could shout out every colorful word in every language in my vocabulary, leap from the couch into the air and know that any number of familial arms were waiting to catch me. More than my two passports or bilingualism, fútbol fanaticism is my citizenship, my sense of legitimacy and belonging in Uruguay, a country that gives time off for major soccer matches.

Growing up, I had experienced soccer American-style, with my father and 300 or so other hapless fans spread out in the cavernous stands of Giants Stadium, or yawning on the couch on a Saturday morning, cursing the English Premier League for taking place during English time zones. It was a little lonely, except that it was the thing my father and I shared, that had us sharing wonky stats and player facts, and waking up at all hours of the night because there was a match on, somewhere.

This lackluster appreciation shown by the country of my birth for the sport of my heart seemed to mimic my own complicated feelings towards the United States itself. As the daughter of an immigrant who fled a military dictatorship orchestrated in part by the United States and the great-granddaughter of Eastern European refugees seeking asylum from anti-Semitism and pogroms, my family’s history is tangled and complex. The melting pot touted as the American ideal and a reality that has always felt uncomfortably like living on the sharp edges of that Venn diagram, never quite finding a center. Because patriotism in the United States over the past few years has come to be inextricably linked to conservatism, xenophobia, and berating NFL players for kneeling during the national anthem, I never felt welcome thinking of myself as patriotic, nor, honestly did I want to.

It wasn't until 2006 that I began to understand the draw of patriotism. On a World Cup-induced whim, my father and I gathered up our frequent flyer miles and made the 16-hour flight to Montevideo to watch Uruguay play a World Cup qualifier against Venezuela.

It felt like every one of Uruguay’s three million citizens had gathered in the Estadio Centenario for the match, faces painted blue and white to match the flags billowing from every tribunal, thermoses of hot water tucked under arms to replenish the gourds of mate that passed around the stadium from hand to outstretched hand. Uruguayans will tell you that mate is a cure-all for what ails you, and sharing one straw with thousands of strangers is definitely a boost to the immune system. For the entirety of the match, nobody sat and nobody was quiet and I was swept up in the feeling of pride in this tiny nation, my second home, the country that gave me fútbol and family and all the joy that comes with it.

This past month, my father and I went to Red Bull Arena in New Jersey to watch the U.S. Women’s National Team play their final match before the World Cup. We waited among jersey-clad, flag-waving fans to take our seats, in an American stadium constructed for the sole purpose of fútbol. Sometime between the kickoff and half-time whistle, I found myself on my feet, screaming in a mixture of English and Spanish, tears running down my face. Instead of the empty hush at Giants Stadium, the roar of the crowd could have been mistaken for Uruguay when its universities and businesses emptied for a match. It took awhile, but the United States has been swept up in this soccer thing. There I was, with my father in another packed stadium thousands of miles from Montevideo’s Estadio Centenario, not a mate gourd in sight. But fútbol had brought us together again. And, as the ball arced toward goal and my father and I leaped out of our seats in unison, it was the two of us and fútbol, the thing that we shared, just like it had always been.

It is said all over Uruguay that other countries have their history, but Uruguay has its fútbol. And so do I.