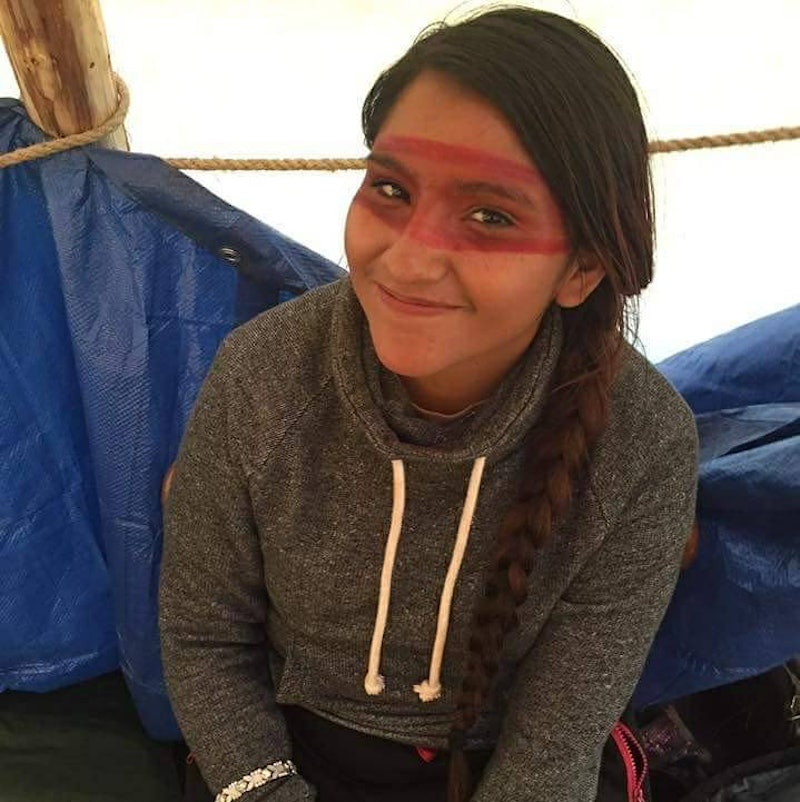 Andreanne Catt is a youth leader in the movement for indigenous rights. She is part of the Eastern Band of Cherokee Nations and Sicangu Lakota, and works with Seeding Sovereignty, a non-profit that brings indigenous women together against dangerous environmental practices.

In grade school, you are taught that the Pilgrims sailed across from Europe in the Mayflower. Two months later, they landed in what is today Plymouth, Massachusetts. You are told that Squanto, an indigenous person from the Patuxet band of the Wampanoag Tribe, taught the Pilgrims how to grow food, to catch fish, to prevent them from starving to death. In 1621, the Plymouth colonists, or Pilgrims, and Wampanoag Tribe, or “Indians,” shared an autumn harvest feast that lasted three days — the first “Thanksgiving.” Or so you’re taught.

The first “Thanksgiving” actually started with a treaty between England and the Wampanoag Nation. This treaty proposed that the Wampanoag would protect the English from any enemies, and that the English would do the same for the Wampanoag. But as all first nation tribes know, treaties meant nothing to the colonizers. Soon after, up to 25,000 English men landed in the “New World.” The sickness they brought wiped out most of the Wampanoag Nation, but this was not the end. The pre-contact population of Native Americans across North and South America was as high as 112 million in 1492, according to the Center for the Study of Diversity in Science, Technology, and Medicine. Today, there are only around three million Native Americans in what is now the U.S., 30 percent of which are below the age of 18, according to the National Congress of American Indians. The U.S. Census found that only seven percent of the native population is over the age of 65. The first “Thanksgiving” invited violence, disease, rape, and other elements of colonialism into our land, so you can understand why we may not see Thanksgiving the same way you do.

My family does not celebrate Thanksgiving, as we do not celebrate our colonizers’ holidays. I live in the one of the poorest places in the country, the Pine Ridge Indian Reservation in South Dakota, which is a three hours’ drive away from the Standing Rock Sioux Reservation. My family does not have enough money to have a feast for Thanksgiving, and neither do most families on reservations. Thanksgiving is not a holiday to us — it is a day of mourning. If this seems radical or overdramatic, look back at everything I just told you. You might see why we feel this way.

Last year, I spent my Thanksgiving with the International Indigenous Youth Council in Oceti Sakowin camp in Standing Rock, South Dakota. For those of you who don’t know, the Oceti Sakowin camp was a prayer camp that opposed the building of the Dakota Access Pipeline. Today, we are still opposing big oil companies and the building of pipelines. On Thursday, Nov. 16, 2017, the Keystone Pipeline reportedly leaked 210,000 gallons of crude oil in Marshall County, South Dakota, the cause of which is under investigation. On Nov. 20, the Nebraska Public Service Commission approved the last stage of the pipeline's construction, clearing the way for KXL to pump more than 800,000 barrels of tar sands crude oil a day from Alberta to Steele City, Nebraska, then all the way to Nederland, Texas, in other connecting pipelines. This is why I spent my last Thanksgiving at Oceti Sakowin; this Thanksgiving, I will be at home with my family, doing the same things we would any other day — hanging out and appreciating each other's company.

We know the hurt that our ancestors had to go through just for us to be here today. Our people are still in pain: Over 90 percent of Native American women have experienced violence at the hands of a non-tribal member, according to the National Institute of Justice. That is 10 times higher than the national average. In my work with Seeding Sovereignty, a women-led non-profit organization that works to decolonize popular narratives like Thanksgiving, I teach self-care and coping mechanisms to other youth who have been affected by the violence of colonialism. We seek to amplify the voice of indigenous cultures and youth at a time when our communities and planet needs to move beyond the roles instilled by the patriarchy.

Over 350 years after the "first Thanksgiving," we will not just “get over it.” We will keep fighting the same way our ancestors did to protect the land and to decolonize the story of Thanksgiving. So this year, when you're sitting around the table with your family, remember what this day actually observes. Yes, you can be thankful for the time you get with your family, but we have to acknowledge this holiday's problematic history — and how its legacy affects the reality Native people face today. It may not matter much to you, but it matters very much to us.

Correction: A previous version of this article misrepresented the current population estimate for Native Americans in the U.S. It has been updated to more accurately reflect that information.