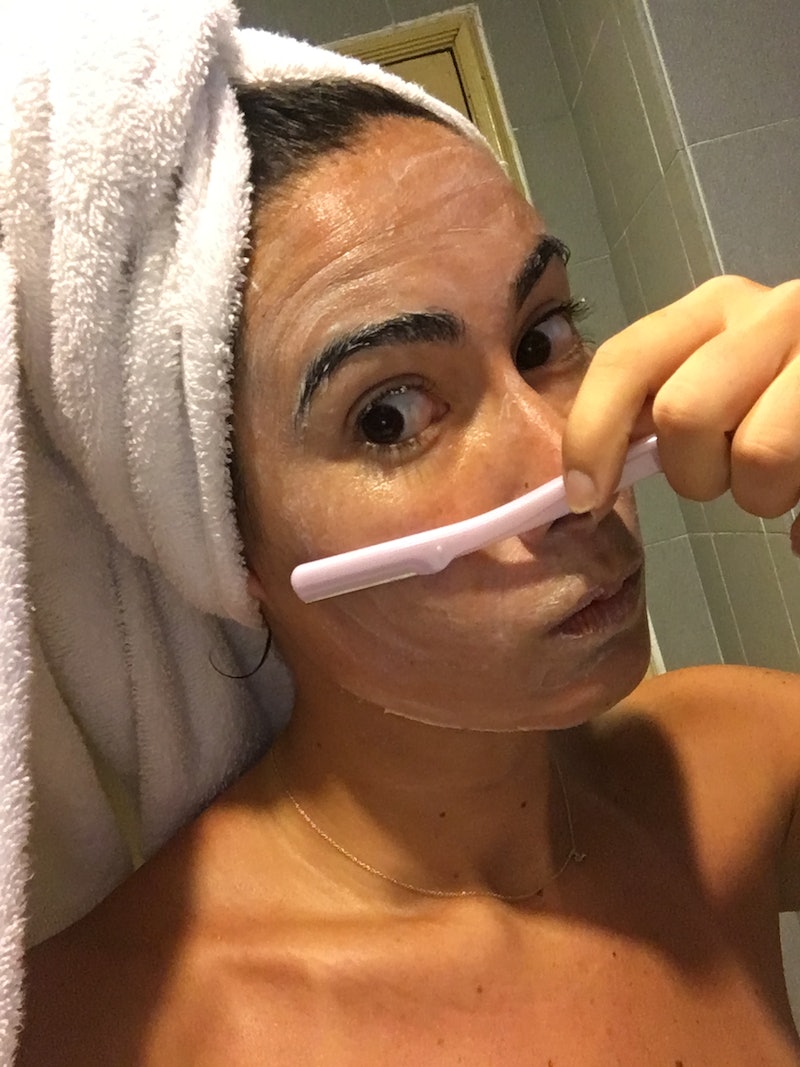 I was once in a job interview with a Korean-American beauty director who asked me what I thought the next new "big" thing in beauty was going to be. "At-home dermaplaning, where you sort of shave your face with a razor," I told her, having prepared for this question for days. (I hopefully said it more eloquently than that, but you get the picture.) "It's so funny when I hear people say that," she deadpanned, "Because Asians have been doing that for centuries. It's not new. At all." Oh. Needless to say, I didn't get the job.

Upon further investigation, I learned that in Asian culture, women had in fact, been shaving their faces pretty much forever (I mean, obviously this woman wasn't lying to me). The trend hit the United States pretty hard a few years ago, both as a method of hair removal and skin exfoliation, and it's slowly becoming less taboo as more and more women test it out. Beauty blogger Huda Kattan recently released a video touting the benefits of doing a once-over with a razor as part of her skin care routine, and listed its many benefits beyond peach-fuzz fighting, including scar rejuvenation, anti-aging precautions, and smoother makeup application. As if those weren't reasons enough to try it out for myself, Kattan claims Elizabeth Taylor and Marilyn Monroe were fans of face shaving, and if it was good enough for the two most glamorous women in history, it was definitely good enough for me. (A lot of the Real Housewives ladies and Bachelor contestants do it too, but that's not nearly as important to my personal narrative.)

Given all the buzz on the internet, I'd tried the whole facial shaving thing a few times with regular old drugstore razors, with mixed results (usually it was when I was running out the door to an event and realized I'd forgotten to get my 'stache waxed). So was really excited when I recently stumbled upon actual Japanese facial razors at a beauty store in Malaysia. They were the real thing (after all, people had been using them for centuries!), and I couldn't resist testing them out. And $9 for a pack of three? Sold!

These razors, which have a single blade and a handle for easy maneuvering, are small enough that they can fit under your chin and around your ears. The blade is sharp enough to tackle both soft and stubbly hairs, but allegedly isn't sharp enough to cut you. (More on that later...)

When I got home and took these superior-seeming razors out of the package, they kind of looked like the weapons gang members use to threaten each other in old-timey prison flicks, but the handles were made of cute pink plastic, which made them look a lot less threatening. I'm a sucker for a girly-looking beauty product, which can be dangerous, especially when they're really sharp.

After I got out of the shower one night, I lathered my face thick in my favorite Drunk Elephant moisturizer (which is why I look like the Joker in all of the pictures), which the directions said would act like a sort of shaving cream. I was technically supposed to steam my face with a warm towel before shaving, too, but figured I'd be fine, since I'd just spent 20 minutes lathering myself in a bathroom-cum-steam-room.

I started on my 'stache, which for some reason seemed like the logical first step. With three swipe-swipes on each side of my mouth, it was totally clear. Next came my cheeks, chin, sideburns and forehead. There were a few errant hairs that needed a little extra tug from my trusty Tweezerman, but for the most part, my entire face was totally bald after three minutes. Cool!

And that wasn't even the best part. At the time of the test, I'd just gotten back from a beach vacation where I hadn't been quite as diligent with the SPF as I should have been (I know, I know), and my skin had been feeling extra dry and flaky. The razor exfoliated the hell out of it, and got rid of all of the gross dead skin that had been sucking away at my expensive moisturizer for days.

At that point, I was feeling really confident about my razor skills (just call me Crazy Eyes), and decided to do a little experimenting. My brows were looking a little rough around the edges, so I used the razor to give them a cleanup. It worked perfectly! It was starting to get fun.

"I wonder what will happen if I try it on my nose blackheads!" I thought to myself, knowing full well that blackheads live under the skin and that a surface treatment wouldn't do anything to help them. But at that point I was in full-blown razor-wielding maniac mode, and wanted to see what would happen.

Big mistake. It only took one gentle swipe for the razor to cut an enormous gash across the side of my nose. It was bleeding like crazy, which meant it was time to step far, far away from the cute little razor. Lesson learned on that one.

Despite the fact that my first experience with Japanese facial razors ended in a veritable bloodbath, I'm actually still really into them. They got rid of basically all of my facial peach fuzz in under five minutes, and didn't hurt at all (even with the gash, it was fine). They also made my skin feel clean and amazing, and my makeup went on crazy smooth afterwards, even without primer. Stubble is definitely inevitable, but whatever — it can be gone in three minutes flat.

If you're going to try these for yourself, just remember that they are, in fact, a pretty sharp and dangerous tool, and need to be used responsibly and with caution. And also, not on your nose.

Check out the “Beauty Tips” stream in the Bustle App for more stories just like this!