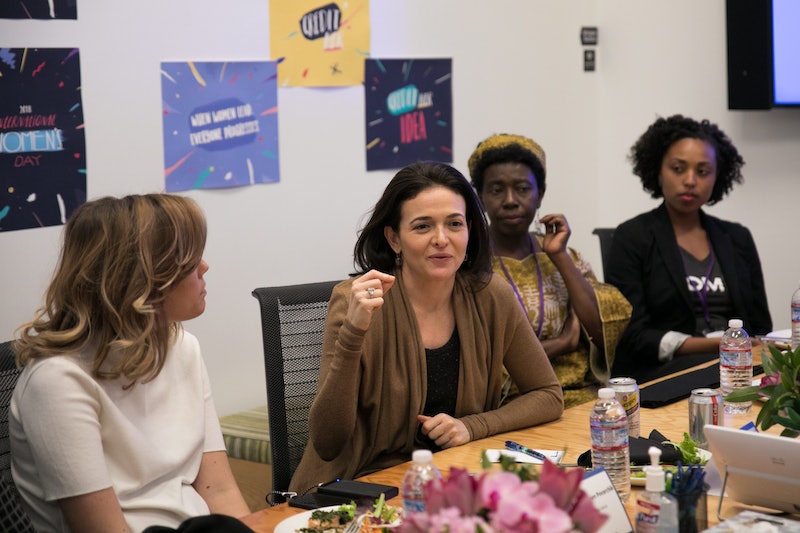 When I look at today's social media landscape, it's easy to feel skeptical — I'm an avid user of Facebook, Instagram, and Twitter, but I've seen so many people denounce social media as toxic and criticize people who can't put their phones down. These are points worth exploring, but after spending International Women's Day with Sheryl Sandberg and a group of women who used Facebook to change the world, I'm reminded that social media can actually be transformative.

Even though I'm always online, I'm often cynical about the effect it has on me. I scroll through my Instagram feed and envy people who look better than me; I begrudgingly like my friends' exciting life updates on Facebook because I'm jealous of them.

This is all due to my own insecurity, of course, but I was left inspired to be intentional about my usage after visiting Facebook's headquarters and meeting normal people who have used social media as a way to grow their businesses, personal brands, and even their communities. Sandberg, the chief operating officer of Facebook and founder of the Lean In Foundation, led a luncheon Thursday at Facebook headquarters in Menlo Park, California for group administrators, small business owners, and women who have hosted successful fundraisers. When Sandberg spoke, everyone in the room listened intently — and it isn't just because she's one of the most powerful women in the world. She's gracious and insightful in a way that feels genuine. "One of the things that gets me to work every day is what's going on with small businesses and the opportunities that people have, and you are the embodiment of that," she told one woman in the group.

As women shared their stories of empowerment, Sandberg told them that it's easy to under-appreciate yourself. "As women, we know the data," Sandberg told the group. "We systematically underestimate ourselves. People underestimate us." She said Facebook wants to continue to amplify the voices of people doing important work: "Our goal is to build the technology that helps you guys do these things, and then your voices are the ones people are going to listen to."

One attendee, Jessica Hubley, is the co-founder of AnnieCannons, a nonprofit that helps human trafficking survivors become software developers. Hubley's friend, Joyce Wang, created a Facebook fundraiser for the organization and asked that people donate in lieu of gifts. Within 30 seconds of Wang sharing the fundraiser, she received a $1,000 donation.

Hubley says her friend's fundraiser — which raised nearly $4,000 in 10 days — reminded her that social media can "give voice and volume" to marginalized people. "I was just like, 'Is this really happening?'" she tells Bustle. "The fact that people actually cared to give money renewed my faith in humanity." Wang tells Bustle that she was blown away by the generosity of the people on her friends list. "I think this is an issue that resonates with a lot of people," she says. "Social media can be so negative, but I love that it gave my friends a chance to feel good." The fundraising efforts on the website have a surprising gender split — 70 percent of Facebook fundraisers are created by women.

Another attendee, Vanessa Puopolo, leads a Facebook support group for mothers. She says she wants more people to realize the good that can come out of the Internet. "People drag social media," she says. "But this is what social media does. It's not just horrible stories."

Hearing their stories about social media — helping nonprofits, making friendships, becoming entrepreneurs, leading groups with tens of thousands of members — left me feeling challenged. I regularly say I'd be better off if I deleted all of my social media accounts, but I also don't focus on creating productive, positive experiences. Instead, my social media usage and consumption is mostly dedicated to snark and sarcasm. I don't think that this is a bad thing, but I now realize that people are using Facebook and similar tools to do a lot of social good without leaving their houses.

If you're worn out by social media or feel like it's having a detrimental effect on your health, it may be a good idea to consider a break. But if you sometimes struggle to see the point of social networking, it's worth listening to the folks who are using the Internet for a much greater purpose than most of us do.