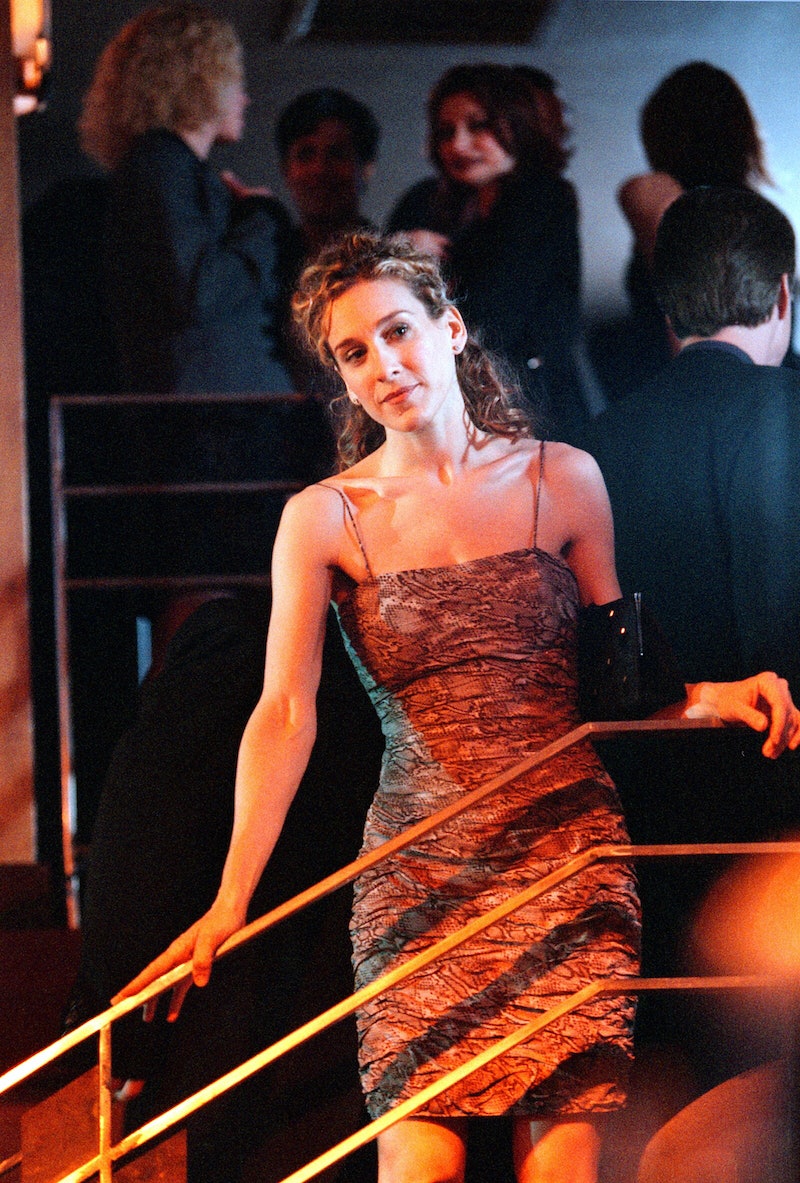 I grew up on a steady diet of Carrie Bradshaw. Born and raised in New York, I took Sex and the City as gospel. The show’s core women were my patron saints of ‘90s fashion. They were the gold standard of female friendship. They were proof that ambition and sexuality could factor equally in a person, and that the modern woman need not wear sensible shoes.

That being said, however, I am not a Carrie. I live in vintage T-shirts, I forget to eat lunch on a regular basis, and I cannot finance an Upper East Side apartment with a singular newspaper column.

In so many ways, the show is utterly tone-deaf. It often reeks of elitism. But for all its flaws, it has always anchored me. Bradshaw’s tendencies have long served as a balm to my personal penchant for scaring away my own romantic prospects, and buying shoes I cannot afford.

It was in my efforts to relieve myself of these very afflictions that I found Brian Lobel: performance artist, former New Yorker, and self-proclaimed Sex and the City "therapist." I discovered his practice deep in the results of an Instagram search for “formal-wear nightgowns.” Naturally, I made an appointment.

As a self-proclaimed 'SATC' therapist, Lobel's project is simple: to locate that one episode that will strike you at your core.

For the most part, Lobel meets with "clients" once or twice a week — his practice only demands one session. He’s not licensed to perform any form of actual psychotherapy, but within the singular hour he spends with each client, he still hopes to offer some emotional solace from his place of limited qualifications. He claims no expertise in the field of psychology, but in the field of Sarah Jessica Parker he might as well have a doctorate. And he maintains the simultaneously absurd and obvious belief that there is some part of us that can be healed by Samantha, Carrie, Miranda, and Charlotte. “Every time I was out I found myself thinking I’d rather be home watching 'Sex and the City.' I can’t be alone in that,” he told me when I called to set up my own session.

As a self-proclaimed SATC therapist, Lobel's project is simple: to locate that one episode that will strike you at your core.

When he first began watching the show, Lobel said he treated Sex and the City as a form of background noise. He’d screened DVDs from a boxset on his kitchen TV while he cooked. “I was 20 when I first watched the episode 'You Have to Forgive Me, You Have to Forgive Me,’ and I hated Carrie,” he says. “I was like, ‘You cheated on Aidan. You did that. And now you made your bed, so you have to lie in it, you bitch’.”

Some 10 years later, in a new apartment with a television nowhere near the kitchen sink, he claims that same episode rang differently. “I just burst into tears,” he says. “I couldn’t understand why I’d been so quick to beat Carrie down. It hit me right where I needed to be hit.”

Prior to our first session, he gave me a homework assignment: a survey listing every single one of the 92 questions Bradshaw couldn’t help but wonder throughout all six seasons of the show. I was instructed to answer each, with as much honesty as I could muster, then submit my work via email. “I will take this as seriously as you do,” he told me. “If you spend some real time with it, I can find a prescription that resonates.”

I spent three hours clawing my way through Bradshaw’s questions — a far more strenuous task than I’d approximated. Some were funny (Are men just women with balls?), others infuriating (Do women just want to be rescued?), others nonsensical (What came first, the chicken or the sex?), and others painstakingly introspective (What constitutes cheating?). By the time I’d reached the final question (Is it time to stop questioning?) I had cried once, sent two unprompted sentimental text messages, and consumed three generous glasses of discount red wine.

Lobel prefers to conduct his sessions in bed. He arrives, pajama-clad, at his clients’ homes, prepared to offer salvation by way of Sarah Jessica Parker (though let us not discount Cynthia Nixon). “The bed isn’t meant to be sexual, we don’t have to touch at all. It’s about removing barriers,” he explained to me over the phone. “The goal is just to spend some lovely quiet time together. Sometimes we snack, drink cosmos. Sometimes we chit chat.”

When I finally met with Lobel, our session took place over Skype — he was performing a circuit of shows in Japan, so our odds of meeting face to face weren’t high. Still, I was instructed to wear pajamas, and stay in bed. “Do you like these? I stole them from a Japanese hotel... don’t tell anyone,” he told me when he first appeared on-screen, smoothing his white, silk pajama set. “Just kidding, tell everyone.”

From the comfort of our respective beds, we began to talk. I told him about my relationship (two years deep), and about growing up in New York City (anxious, but colorful). He asked me what I wanted as a writer, and I told him I wanted to be taken seriously. He wondered about my romantic tendencies (evasion) and my friendships (secure). Finally, he asked me if I was in love with my partner (yes), and if I thought I would marry him (no). He pressed me to explain the difference (complicated).

When I finished speaking, he was fully prepared with my syllabus. “I have three episodes — we’ll have to see which hits home,” he told me. “Though I have my theories.”

Before we signed off, Lobel instructed that I place my laptop just centimeters from my face, a positioning that didn’t feel entirely natural. “We need eye contact here,” he said. A beat began to play through speakers on his end, and then a full song took shape: “You Got The Love” by The Source — the track that plays at the close of the final episode of SATC.

And with that, our screens went blank: the words that had concluded the iconic television show had closed out our session as well. And there I was, dressed in a set of flannel pajamas, cradling a now-black computer screen tenderly to my chest.

I was waiting, albeit impatiently, to feel what Lobel had experienced. I wanted some radical shift in emotion to make that laundry list of questions worth my while.

I proceeded to plow through my first two prescribed episodes. In “The Man, The Myth, and the Viagra” (season 2, episode 8), I watched Carrie grapple with the role her friendship with Miranda would play in the context of her relationship with Aidan. In “Time and Punishment” (season 4, episode 7), I saw Charlotte struggle to understand her own devotion to her job. Both felt relevant, but they weren’t core-shaking. I was waiting, albeit impatiently, to feel what Lobel had experienced. I wanted some radical shift in emotion to make that laundry list of questions worth my while.

Then there was the third episode.

It did not move me to tears — there was no plunge toward enlightenment. Those sorts of clichés persist only in the microcosm of the Upper East Side belonging to Bradshaw’s posse. But like with any prescription, I felt a twang. Just a minuscule movement in my chest, somewhere beneath my sternum.

In “Change of a Dress,” there are, of course, the utterly tacky lines: “For a shower with such terrible pressure, I suddenly felt a ton of it beating down on my shoulders.” There are the outfits, namely, Carrie’s printed calf-length skirt, paired with a belly shirt, and a polka-dotted green belt secured around her bare midriff.

And yet, there remain those little kernels of truth, poking through that initial layer of frosted ‘90s glam. In this episode, Carrie, who is truly allergic to the prospect of abandoning her independence in the name of romance (she breaks out in a rash when she tries on a wedding dress), seems reluctant to believe that being in love is not, and cannot be, everything. As she falls asleep beside Aidan on the floor of their unfinished apartment, having just broken off their engagement, some cog clicks into place. “There are some walls you can push through, and some you can’t,” she says matter-of-factly, curling against him in a gala-appropriate cotton nightgown. The next morning, he leaves her. That was the moment of impact — some small blunt force against my ribs. Precisely what the doctor had ordered.

For some time, I had been toying with a question that tasted unequivocally bitter, like swallowing perfume: is it capricious to be in love with a person I’ll never end up with? Is commitment selfish when it’s finite? The idea of “forever” had never held much gravity for me, until I’d explained out loud how deeply I loved a person with an expiration date, only to be met with some form of disapproving awe by my friends. And here I was, watching Carrie dismantle herself due to her own aversion to that very same word. I had not yet broken out in hives, but here was some form of substantiated proof that loving someone — truly and unabashedly so — did not guarantee them all of you. It granted them your present. Anything else was a bonus.

The prescription process is an imperfect science, and the show itself is, at times, wildly problematic, but Lobel is right: it can be special. It has a unique way of reflecting us back to ourselves, however unflattering the image. Much like New York, it is loved begrudgingly: glamorous, nostalgic, and tragically flawed.

Lobel encouraged me to check in afterwards to let him know which episode had shaken me, if any. I wrote to tell him that his project had worked. I had felt something. I didn’t know what to do with it yet, but I had felt it nonetheless. It was precisely as he’d promised.

I do not believe that all of us, or even most of us, will find clarity somewhere on Carrie Bradshaw’s Park Avenue. But Lobel is right to claim that the shows we sit with for hours on end across years, even if merely to fill our living rooms with ambient sound, call to us for a reason. It’s a peculiar brand of kinship, unlike any other form of sisterhood. If Sex and the City feels that way to you, I suggest you give Lobel a call. Armed with his boxset, he’ll tell you something you already know — sometimes, you need to hear it from Cynthia Nixon over lunch to believe it.

“I’m not a Carrie either,” Lobel told me, before ending our session, “but she had a knack for asking good questions. And she never wore the same outfit twice.”