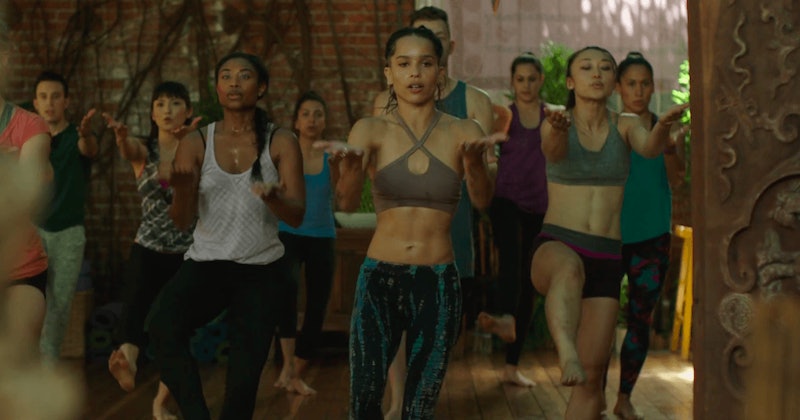 The Monterey Five were in a pretty sticky situation when we left them at the end Big Little Lies season one. The word cliffhanger would quite frankly be an understatement for the way things ended, and I think it's fair to say that most Big Little Lies fans have been waiting with baited breath for the second season to air. The ladies on the show live a pretty glamorous life and all have incredible jobs, including Bonnie Carlson, who is a Nia teacher. Nia is a form of dance cardio fitness that focuses on connecting your body and mind. Earlier this month, I tried out a Nia class for real — and let me tell you, it's not as easy as they make it seem on TV.

Ever since the first season aired, Big Little Lies has got fans feeling pretty curious to find out just what Nia is. Bonnie (Zoe Kravitz) is one of the resident cool mums on the show in episode four and appears to teach what looks like a really high intensity, and very sweaty, yoga-slash-dance-fitness class. But I can tell you from experience that it's so much more than that.

To celebrate the launch of the new series of Big Little Lies NOW TV held a Nia class and an exclusive preview of the new season and I left really feeling like one of the Monterey Five. Well, you know, minus the murder stuff.

Although the Nia technique got it's big break on Big Little Lies, Realbuzz reports that it has been around since 1983 when "two disillusioned aerobics instructors started to look for a more meaningful, expressive way to get an exercise workout."

In the class, we were told that Nia stands for a combination of "non-impact aerobics" and "neuromuscular integrative action," and Realbuzz explains that the Nia technique is all about "giving purpose to movement." As NiaNow puts it, the practice combines "dance, martial arts and mindfulness," and "tones your body while transforming your mind."

Here are the seven things I learnt from taking part in an IRL Nia class.