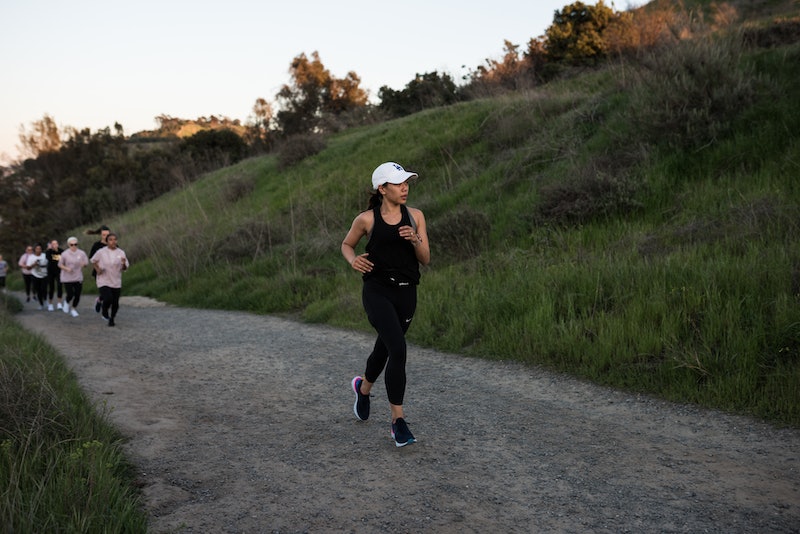 I've had a long and complicated relationship with running. I still remember one of the first times I ran the mile in sixth grade and realized, hey, I'm pretty good at this. Soon, I was doing it regularly, spending countless hours on the treadmill and the track and would later join the cross country team in high school. Eventually, it became more than just a hobby. In college, I developed exercise bulimia, and running was at the center of my disorder. With the help of friends, I realized what I was doing was destructive, but after recovering from my unhealthy obsession, I couldn't really look at running the same way that I once had — and I definitely didn't enjoy it the way that I used to.

I'd still run on occasion, even getting myself to train for a couple half marathons, but I always couldn't wait to get the runs over with. So, when Nike asked me to participate in a five-week training for their Choose Go 10K run in Los Angeles with a small group of editors and influencers, I was hesitant. Did I really want to get back into the habit of running on the regular? The Nike team assured me it'd be a fun experience, not competitive, with a focus on feeling strong and badass. I decided to forget everything I felt about running and treat this as a fresh start.

The first step? Getting some new gear. I outfitted myself with an Apple watch to track my progress and Nike's newest running shoe, the Epic React Flyknit, which was made with a proprietary technology and features the comfiest foam cushion ever. Next, I met our coach, Blue Benadum. Coach Blue, as we would call him, is the Nike+ Run Club coach and has run over 60 marathons (!!!). At first, I was fairly intimidated to meet him — this guy is used to training elite athletes and professional runners, after all. But after learning about his outlook on running — which focused more on the journey of training versus just crossing the finish line as fast as possible — I felt a little more at ease.

Coach Blue created an easy-to-follow, albeit challenging training guide that consisted of hour-long runs, speed runs, and Nike Training Club app workouts. According to Coach Blue, running well didn't mean just pounding the pavement — it also meant cross-training, strength-training, and stretching. Our group, which we would later call the #LAGoGetters, would meet weekly to train with each other, but for the rest of the week (we were encouraged to work out six days a week to train for this 6.2 mile run), we were on our own.

Over the course of five weeks, I ran more than I had in years. I reluctantly found myself back on the treadmill at my neighborhood gym — harrumph. But after the first week of training, I actually felt kind of excited about running again. Maybe it was the cute new shoes (I'm a fashion and beauty editor, guys!), the motivating Nike Run Club app guided runs, or just the fact that I was in a better, more mature place mentally — whatever it was, my mindset had suddenly switched. I realized that running didn't have to be about the end goal of being the fastest or the fittest. It could simply just be about being present and enjoying every run as it happened, step by step, glide after glide.

On the day of the race, I felt nervous. A previous foot and leg injury I had (plantar fasciitis and sciatica) worsened over the last few weeks of training and I knew it would make running at my race pace a bit more challenging. I was also worried I was going to feel overwhelmed having to run 6.2 miles with over 8,000 people on the 90 Freeway (yes, Nike shut down an entire freeway for this 10K race). I started to doubt myself. Waking up at dawn to prepare for the run didn't help my nerves either.

But when our team gathered at the starting line, surrounded by thousands of people who were excited to run (at 7 a.m. on a Sunday morning, no less), I couldn't help but feel grateful for the entire experience. Grateful to run with a group of uplifting women who encouraged me to do my best. Grateful to train with a world class running coach. Grateful to be healthy and able to run at all.

I crossed the finish line at 52 minutes, averaging an 8:24 minute mile. It was a little slower than I had trained for. I could start to feel myself fall into disappointment, but I quickly snapped out of the negative talk and reminded myself that this wasn't about the race, but the journey itself and how far I had come. Instead of beating my body to the ground like I once would've, I listened to it, following the training schedule, but allowing myself to have rest days when I needed them. Thanks to Coach Blue, I learned how to become a better runner, not just a faster one. But most importantly, I had fallen back in love with running, and this time, it wasn't about obsessing over calories or worrying about how it made me look. Instead, it was about how it made me feel. For the first time in a long time, I was excited to run again. And hey, I was still pretty good at it.