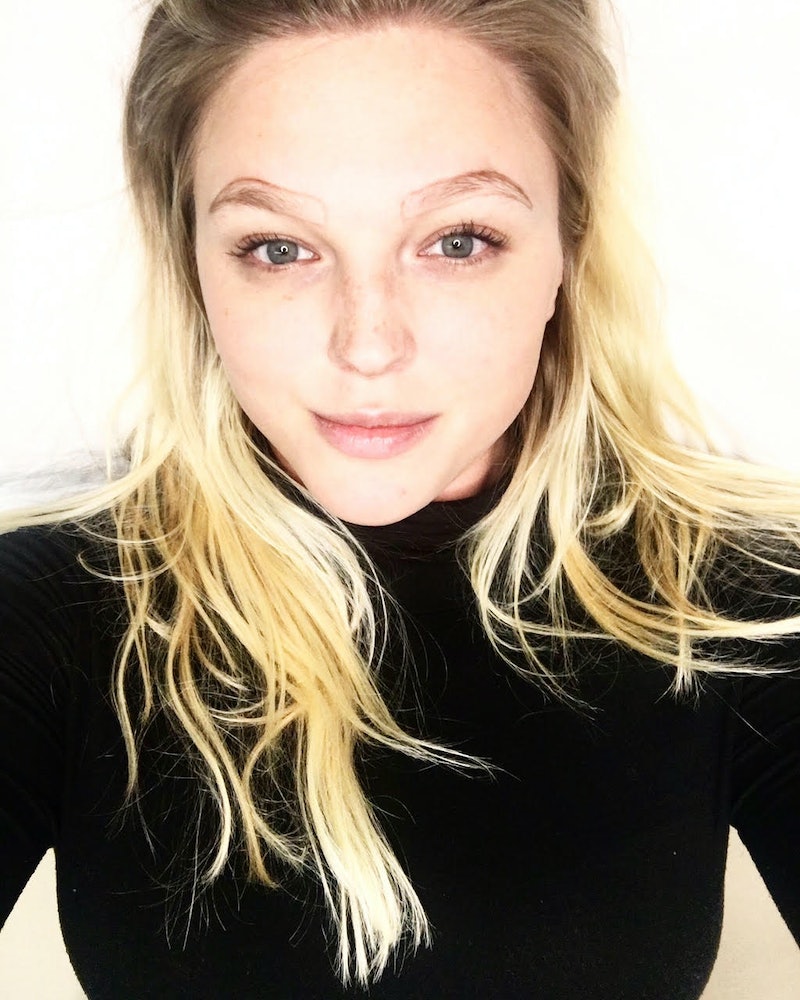 I'm old enough that I can still remember a time when eyebrows didn't matter. Sure, they were always there. You could pluck, thread, or wax them to your liking. But no one was going to stop you on the street and say, "You have great brows," no matter how perfectly shaped they were. There were other, more important things to focus on, like Juicy Couture tracksuits and those spaghetti-strap tank tops with the built-in bras. If you told me five or 10 years ago that I would try microblading my eyebrows to make them look fuller, I would have laughed. Tiny blades? Miniature tattoos? On my face? No, thank you. Yet, here I am in 2017, and I can confidently say that I am never going back to non-microbladed brows.

You might be wondering what microblading even is, exactly. I got my brows microbladed by the Eyebrow Doctor (great name, I know) herself, Piret Aava. Aava is a makeup artist, certified aesthetician, cosmetic tattoo specialist, and if you're asking me, a brow wizard. Not only did she make the entire thing simple and smooth, but Aava also explained to me all the details about the process itself. Aava tells me that the simplest definition of microblading is "manual semi-permanent eyebrow tattoos mimicking the natural hair strokes of eyebrows."

Still confused? A little afraid? Yeah, I was too. Below are some of the most frequent questions I got asked about my microbladed brows — and, of course, the before-and-after photos.

How does it work?

Like Aava says above (in more technical terms), microblading is literally a tiny, tiny, tiny blade digging into your skin so that ink can fill the tiny cut and tattoo you. It sounds scarier than it actually is, and if done correctly, it will look completely natural.

Aava says people are always amazed at just how natural it looks. "You can barely tell, even up close, what is a natural hair and what is one of the strokes."

As Aava tells me, everyone's pain tolerance is different. For me, my first appointment was only slightly more uncomfortable than getting my brows threaded. Your eyebrows are numbed with a cream beforehand, and Aava gave me a stress ball to squeeze when it got particularly painful, which was very helpful.

The follow-up appointment a month later (which is scheduled to compensate for any fading and set the final look) was, for me, much more painful than the original appointment. The main thing that bothered me in both sessions (aside from the pain in the second appointment) was the sound of the blade scraping against my skin. But you could always wear headphones to help with that. In a word, yes, it does hurt a bit, but in my opinion, it's worth it. And it's not like waxing or plucking or threading feels great either.

What does it look like before and after? Is it noticeable?

How much does it cost, and how often do you have to get it done?

Microblading is not cheap. And if you go to someone who is very well-known and respected in the field... well, it's definitely not going to be cheap. But it's important to remember, as Aava tells me, that this is a tattoo on your face. It's not exactly something you want to risk going wrong (or worse, getting infected) due to an iffy technician.

"It depends on the level of the technician, but it can be anywhere from $300 to $2,500. I do not advise looking for someone who is cheap just to save. This is a tattoo on your face — it’s worth the investment," Aava says. "Do your research! I can’t stress that enough. [Someone researching microblading specialists] should always look at pictures of past clientele — their healed results. And make sure you look for head-on photos, not just from the side or one eye. It’s important to make sure the technician creates even brows. Look for someone who has some experience — you don’t want someone who was just licensed yesterday."

In terms of how often you have to drop that amount of cash, Aava tells me this varies as well — but in general, touch-ups should happen every six months to every year.

"It depends on your skin and your lifestyle — there are some things that will definitely fade the ink like constant exfoliation," Aava says.

Is it worth it?

I will be honest, there are a few annoying things about microblading. Yes, it does hurt a bit. You can't get your brows wet for a week after you first get them done. It is not inexpensive. But yes, for me at least, the treatment is worth it. I have naturally sparse and incredibly light brows, so getting my brows microbladed means I never have to worry about if they're filled in correctly, or evened out, or looking like a hot mess. Waking up with brows I don't feel like I have to do anything to is something I had never experienced before microblading, and now that I have, well, I'm not going back.