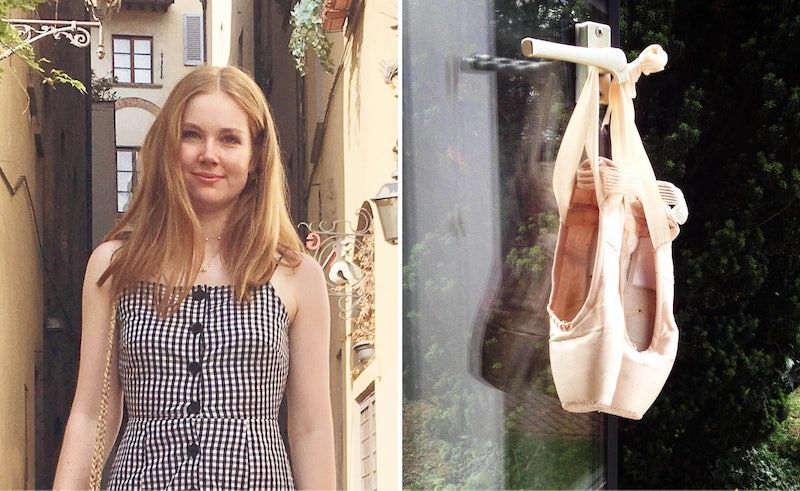 At least twice a week, I fish a leotard from an overstuffed box in my wardrobe, and scrape my hair into something loosely resembling a bun. I wrap lamb’s wool around my toes in an effort to minimise the bleeding. I dance the same combinations, agonising over the depth of my turnout and the precision of my turns. And I leave with blisters and sweat patches and a recurring twinge in my right Achilles tendon. I’m not good at ballet; comparatively speaking, I’m probably not even average. But somehow, improbably, ballet helps me cope with my chronic OCD. It’s been almost five years since I first found relief in dancing; since then, I’ve never once imagined that I’d stop.

I’ll begin with something vital: ballet can’t cure OCD, and neither can running, or yoga, or "getting a bit more fresh air." Mental illnesses demand medical attention, whether that’s in the form of medication or therapy or a combination of both. I write this, regardless of how self-evident it may seem, because too many of us still don’t find our mental illnesses taken seriously; too many of us are expected to heal alone and untreated, with only a once-weekly exercise class to help us cope. I take medication, and I see a psychologist; dancing is a vital aspect of my weekly routine, but it will never replace proper treatment. Still, there’s a reason why I won’t miss a class to grab a drink with a friend. From dancing, I take something I never anticipated I could find.

When I was little, I danced ballet in the halfhearted way most children do: an hour a week, in a primary school sports hall, with little further commitment beyond showing up almost every Saturday. My teacher, though acutely beloved, was firmly of the old school — one who believed there was one type of body for ballet, and that body, the Balanchine body, was unfalteringly thin. Though she didn’t criticise our physiques, or suggest we lose weight (most of us were once a week students anyway, and clearly never destined to dance professionally), she did compliment the bodies of those with an obvious future on the stage. She pointed out their long necks and admired their slim, hyperextended legs, while the rest of us poked at our thighs and wondered just how wrong we looked in our leotards.

As I got older, and didn’t increase the number of classes I attended, my grades in ballet exams began to slip. As a child, with a reasonable amount of natural aptitude, I collected a string of distinctions; as a teenager, unmotivated and uncommitted, I couldn’t exceed a merit. By then, my OCD was mushrooming into its first period of dominance; I thought only of school, and my grades, and how little I had to offer besides my cleverness, and I adjusted my entire life accordingly. After an embarrassing end-of-year performance as a Wili in Giselle, during which I wobbled off demi-pointe at the front of the stage, I stopped going to ballet altogether. I missed it, albeit furtively, watching dance videos in my bedroom and researching university dance societies. But I didn’t go, and I didn’t miss the sense of inadequacy that once rendered me sullen and silent on the car journey home from class.

In the winter of 2013, I took a year out of university and found myself with nothing to do. I left because my OCD had become so severe that I was unable to read, or write, or even leave my room without being incapacitated by a new deluge of intrusive thoughts. I obsessed constantly about being a bad person; about the ways I might have hurt people; about the terrible things that could befall the people I loved the most. Afraid of silence, and of the new terrors my brain would produce to fill the sensory void, I sought out 3 a.m. conversations and sat too long in the high street Starbucks, listening to podcasts at maximum volume whenever I was forced to be alone. Going home was the only reasonable option — how could I finish an English Literature degree if I couldn’t even read? — but it left me more isolated, more prone to obsession than ever before.

I hit upon ballet accidentally. I found a Christmas job at River Island, but it only offered part time hours — something to be grateful for in the North East of England, where unemployment is typically the highest in the UK. Most of my friends were away at university, and though I struggled to recognise it at the time, I was miserably embarrassed to see them when they were home. Letting the time slip by on the settee was never an option: each unoccupied moment was an unguarded doorway through which bleaker and bleaker intrusive thoughts marched. On a whim during one such empty day, I opened the drawer into which, three years earlier, I’d shoved my leotard and battered satin shoes and never pulled them back out. Within the hour, I’d called my childhood teacher and told her I was coming back.

The sports hall where my teacher held class was almost entirely unchanged, though the photos on the walls were updated with new classes of grinning children, and the netball lines on the floor looked like they’d been repainted. But the unstable portable barre, stored in a cupboard next to mesh bags of basketballs and stacks of plastic cones, was the same. As was the old, dented CD player that skipped in the middle of tracks and forced dancers to freeze in the middle of a combination, holding a trembling plié until the teacher somehow fixed the music. I sat in the corridor and watched the preceding class with a building sense of regret. I’m too old, I thought. I was never good in the first place. A teenage girl wearing a hairsprayed bun and knitted warm-up trousers dropped into an easy centre split next to me, and my dread intensified. I walked into the class certain I’d embarrassed myself by even turning up.

At the barre, the steps returned more easily than I expected: battement tendu, to battement frappe, to rond de jambe en l'air. My feet were flatter than before; my extensions, never my forte, barely reached a right angle. And I faltered in the centre, unable to keep up with combinations that the sixteen-year-olds around me performed without thinking. But I didn’t blame myself like I did as a teenager. And I wasn’t embarrassed, either. Instead, I felt something unexpected — something like relief.

There are a thousand tiny, unseen calculations necessary to perform a single pirouette. Your plié shouldn’t be too deep, your fourth position too wide. Your shoulders must be square and your core engaged. You can’t lean back or tip forward. One foot must be drawn up towards your knee at the same time your supporting leg straightens; your head must whip back around to the front, and your arms must close to a strong first position. All these things must happen instantaneously for a sole 360 degree turn that’s over in under two seconds. There’s no time to think of a single thing more.

And for once, I didn’t. In that first ballet class, my intrusive thoughts dulled. I left with a searing cramp in my left calf that would take days to fully abate. I was sweating and dishevelled — and completely, intoxicatingly exhilarated. It was in a subsequent ballet class that, for the first time since returning home, I resisted the urge to compulsively check my Facebook after a new obsessive thought. And it was in a ballet class that I prevented myself from repeatedly touching wood, despite the furious demands of my brain. An hour-long class became the longest period I’d gone without performing some sort of OCD ritual.

When you dance, you think, and you enact. There’s no time for an image to stick and rot in a corner of your brain: you dance the step as you picture it, and if you falter, the music leaves you behind. My daily life was an unremitting assault of excruciating thoughts and even more excruciating rituals to mollify them; most of them never truly left, but crowded up against each other in an increasingly oversaturated brain. But when I danced, something I couldn’t define was released.

At fifteen, a psychologist earnestly encouraged my dance hobby, urging me somewhat melodramatically to “lose myself in the dance”. I bit my lip in an effort not to giggle; my mam still mocks me with the phrase today whenever I get a bit too effusive about ballet. Theatricality aside, losing myself was never an option: I had a brain that wouldn’t switch off, no matter how desperately I tried to silence it.

Ballet is not an art form typically associated with mental wellbeing — it’s Maureen’s eating disorder in Center Stage, or Nina’s breakdown in Black Swan, or Vicky’s desperate leap in The Red Shoes. And the association exists for a reason: though it’s crucial not to reduce the complexity of eating disorders to a single, simple cause, the dangers of the ballet world for those susceptible to them are well documented. It’s with caution, and a keen awareness of the singularity of each person’s experience of mental illness, that I acknowledge the good ballet did me.

And at times, when I come close to tears for falling out of a double pirouette or lambast myself because, after almost five years, I still haven’t achieved my splits, I begin to doubt. I worry that I’ve traded one obsession for another; that ballet doesn’t actually quell my intrusive thoughts, but simply substitutes them for new anxieties. I have to remind myself, sometimes, that it doesn’t matter if I fall out of my turns. I’m not dancing for grades, or for roles, or for a career; I’m only dancing for myself.

Still, given the choice, I’d elect without thinking to obsess over the height of my attitude. And I can live with being a comparatively crappy dancer; beneath the frustration of my own mediocrity, the exhilaration of that first class has never faded. My friends wonder, occasionally, why I tolerate bleeding feet and throbbing muscles and mounting class fees for the sake of something that will never amount to more than a hobby. I’ve never quite managed to put into words that feeling of being free.

I take adult ballet classes now, held everywhere from dedicated dance studios to dim church halls. My classmates look more like me; they chat about their 9-to-5s and their families instead of their impending GCSEs. We’ve never talked about it, but I’m confident most of them find something similar to me in ballet — not a future career, or something to list on their UCAS application, but some kind of unspoken release.

I still touch wood compulsively; I still grapple with intrusive thoughts, still find my life circumscribed by the persistent miseries of OCD. But I'm equipped with something new, something I can only attribute to ballet. At my most hopeless, I call to mind a memory: the intrusive thought that struck me in the middle of a combination, and the moment I decided that instead of carrying out a compulsion, I would continue dancing the adage. And then I wrap medical tape over plasters over the blisters on my feet, and I go back to class.