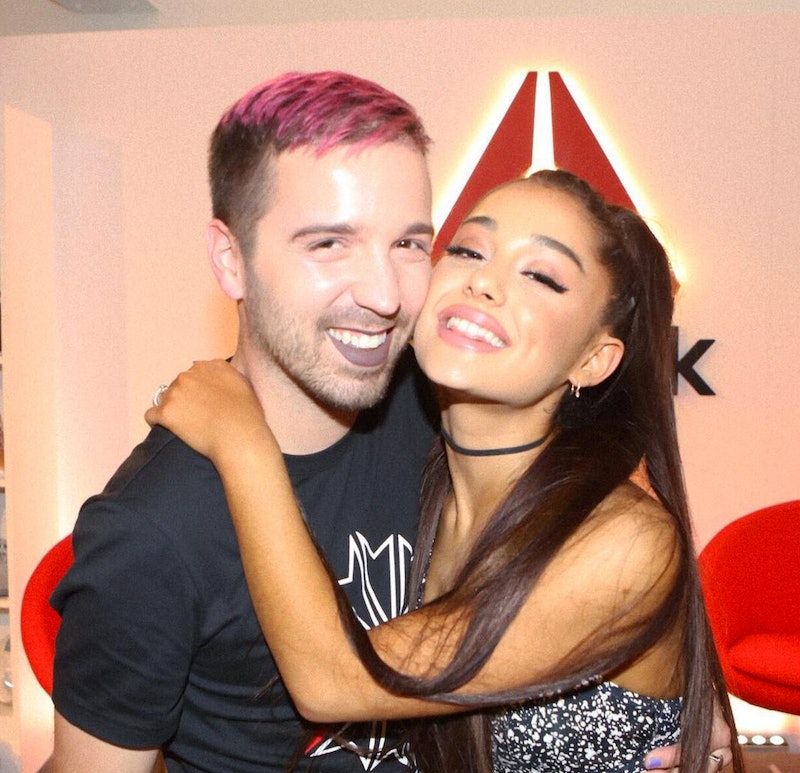 On what was otherwise a very average afternoon, I received an email from my editor. It read, "Do you have five minutes to hop on a call? Very important!" It was ominous AF, and then she casually called me and asked me the following:

"Do you want to fly to Hong Kong in two days to dance with Ariana Grande?"

Naturally, there was no way I could drop everything and skip town at a moment's notice, much less leave the country for a week. Absolutely not. I responded almost immediately.

The trip was hosted by Reebok, in celebration of the brand's recent partnership with the pop star. Reebok flew a group of editors and writers to Hong Kong for some face time with Ariana, and to experience the Ariana x Reebok collection firsthand. Yes, we were going to dance with her — though the exact rundown of how it was all going to go down was unclear. Before I could really put any thought into it, I was getting off a plane in east Asia.

The first day started with a workout with Harley Pasternak, Ariana's personal trainer. We did lunge squats across a soccer field in the middle of Hong Kong in the sweltering hundred degree heat. Sweating buckets and convincing myself that my hamstrings were this close to giving out, I regretted all the times I skipped leg day.

Before we knew it, we were on our way to the main event. Led by a member of the Reebok team through the streets of Hong Kong, I was unsure of where we were headed, assuming it would be some large, glamorous venue. After a few minutes of winding through the streets, we arrived at the door of a warehouse.

"Here!" the Reebok team member announced cheerily, pointing us up a set of dingy steps leading to a freight elevator. We exchanged glances and lined up outside the doors before filing in, packed shoulder to shoulder. When we arrived at our floor, the doors creaked open with a gust of cool air revealing the brightest white room I have ever seen. Thumping dance music echoed around us, and we were handed murky purple cocktails that may or may not have contained booze (I'm still not sure). The walls were adorned with neon signs that glowed with inspiring phrases like "Be Dangerous" and "ArianaxReebok."

Another wall was lined with mirrors. I immediately checked my makeup.

We took seats, and a man who appeared to be about nine feet tall introduced himself. As he did, he nodded toward the back to the room. I followed his gaze, immediately wishing I hadn't. My soul left my body, and I let out what I can now only hope was a very quiet gasp.

Standing there, as if she'd manifested from thin air, was Ariana Grande.

She wore an oversized, thigh length blush-pink Reebok sweatshirt slung off the shoulder and no pants. At this point, I could have sworn I heard the frantic typing of girls Googling "Reebok Sweater Dress."

"Hi everyone," she said, smiling widely as she sat down and negotiated her position in the chair, crossing and uncrossing her legs, tugging the hem of her sweater. "I forgot how to sit," she joked, laughing. Then, we laughed. From that point forward, we were all best friends.

A Reebok representative then explained why they chose Ariana to collaborate with the brand, that she embodies their message and values. Then, it was Ari's turn on the mic.

At the end of the first portion, as she was walking back down the aisle to leave, she looked me dead in the eye and told me "I love your hair. And your lip!"

The next portion was the dance class, which, truth be told, we were all dreading. Dancing with the choreographer of one of the biggest pop world tours (not to mention the star herself) is a once in a lifetime opportunity. But we were all media girls! We sit at desks all day long and maybe go to spin or yoga! But a dance class? What did they want from us?

Ariana's choreographer and creative director, Brian Nicholson, and his twin brother, Scott, stepped up onto a raised platform in front of us, ready to teach us the first few eight counts to "Be Alright," the Dangerous Woman track that opens her tour. We were tugging at our sleeves and shuffling around, none of us eager to make an ass out of ourselves in front of two professional dancers and one full time pop star.

But luckily, Ariana was nowhere in sight. I figured perhaps she had decided to forgo the secondhand embarrassment of watching us all desecrate the choreography that she executes perfectly every night.

And then, as if on cue, Ariana ran through the crowd, ponytail bobbing behind her, up to the stage and took her place in between the twins, facing us, her face beaming.

I looked down at my two left feet and my knees locked in place. My hamstrings, already sore from the workout mere hours earlier, started to quake. I already wasn't keen on dancing, but the prospect of dancing in front of Ariana Grande was making my whole body freeze up.

We began. The choreo was, mercifully, pretty simple, easy enough for the room to pick up without any noticeable fumbles, minus me, remembering once again that I do not know my right from my left. The DJ to our right had the song cued up to where we're supposed to start.

And then, with the DJ waiting to hit play, Ariana Grande took charge.

And then she started singing while we stumble through the counts. Like it was nothing! Like she was just another girl running us through the dance.

Again and again, we ran through the dance as Ariana sang us through it, cheering us on.

"You're killing it!" She cried, pointing at a girl in the front row. "YAAAAAS."

We're running the counts over and over, four feet in front of Ariana Grande. I was simultaneously wishing for this to never end while willing myself to drop dead right there on the spot. Every time one of the twins would make eye contact with me, I'd subtly vogue my way behind the girl in front of me to shield the fact that I was at least three counts behind.

Once all of the counts had been taught, we started running it, and Ari and the two boys jumped down and wove their way between us, doing the choreo along with us.

They disappeared from view, cheering everyone on and dancing through it with us.

At which point, I did a goddamn ball-change or whatever and glanced to my right to see Ariana Grande looking back at me, shooting me the biggest smile. At this point, I had completely disassociated, fallen clear out of my own body, unable to process what was happening around me.

Ariana was clearly enjoying herself and, if you didn't know who she was, you'd think it was just a regular dance class, no pop star in sight. Meanwhile, I'm sweating bullets trying to keep my head on straight. It all turned into a blur of eight counts, twirls, and her angelic voice floating above us.

By the time I came to, we were entering the group interviews. I sit one person down from Ariana Grande and am generally shook from the dancing paired with the proximity to the woman who gave us "Into You."

Taking her in at an even closer range almost feels voyeuristic. From where I sat, I could see her perfect, pale blue almost white, oval-shaped nails, looking like easter candies, her minimal jewelry, the surprising number of tattoos on her hands, the crescent moon on her neck. I could reach out and touch her, but I don't, because I can't move.

She talked about her life on the road, her plans after tour, but what stuck out to me is when she touched what inspires her.

"I like people who don’t give a fuck and wear what they think looks cool and they make it work. There’s no like 'this is in or out in the people that I’m inspired by.' People who commit and do what feels amazing."

Before I knew it, we're saying our goodbyes and leaving. The event lasted almost four hours but it felt like only a few moments. No, it felt like a dream. Out of the cool air conditioning and back into the sweltering Hong Kong humidity, I was left thinking, had that really happened? Had she touched me?

The next night, we filed into the arena to watch the last night of the Dangerous Woman tour. The lights went up on the first number of the set, "Be Alright," the first same song we'd danced to, with Ariana, just a day before.

Now, front and center, flanked by her dancers, she was hitting the same counts we were in a warehouse just the day before. She looked as carefree on stage as she did in the group. As for me, happiness was the only emotion I could muster: I was so tremendously happy to be there, and even happier that Ariana was the only one dancing now.