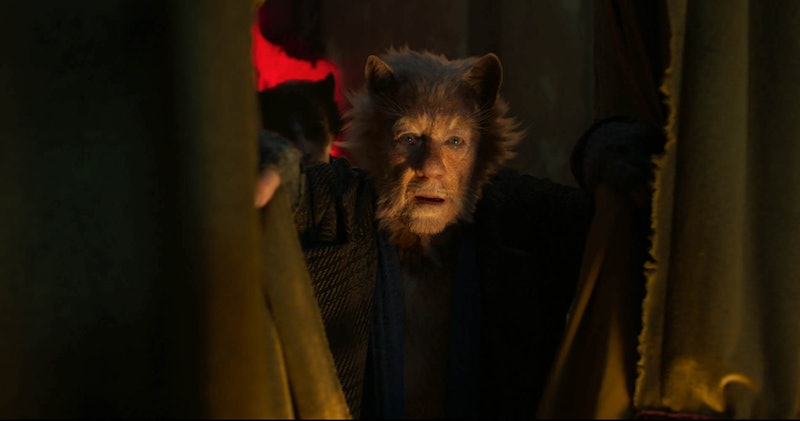 When the Cats trailer premiered over the summer, the uncanny CGI effects that turned the movies' stars into human-like cats instantly received backlash. But now, in an interview with Entertainment Tonight, Ian McKellen is defending the Cats CGI, explaining that the effects were necessary to tell the story. Even if fans are a little confused by the finished product.

According to McKellen, who plays Gus The Theater Cat in the film, the CGI — dubbed "digital fur technology" — wasn't actually meant to convince the audience that they're watching real cats. Instead, it was about "human beings discovering their cat-like nature."

In fact, the actor said he was happy that the film adaptation chose not to turn the characters into fully animated felines. "The temptation I think must have been to turn those actors into cats, like Lion King, and make them look like real cats, but they're not real cats," the actor explained. "They're people playing cats, and that is the notion of the film, and it's been done very wittingly."

It seems that what McKellen is saying is that the Cats film adaptation is supposed to be an accurate representation of the original show. Cats, after all, was created as a stage show in which the cat characters are cats, but the audience knows they're really being played by humans. It's all very confusing — but appropriately so, given how confusing the plot of Cats actually is.

McKellen's comments will likely do little to dismay those who immediately raised their eyebrows at the CGI in the first Cats trailer. When the clip debuted in July, fans didn't hold back when it came to discussing how strange the effects were. Many went straight to Twitter to talk about how uncomfortable it made them to see stars' faces covered in fur — including McKellen's.

Shortly after the trailer was released, Rebel Wilson, who plays Jennyanydots in the movie, defended the CGI in an interview with Cosmopolitan. Addressing the "polarizing" reaction, the actor explained, "I think some people found it a bit creepy ’cause we’re people but we look a bit like cats dancing around.” And, according to McKellen, that's the whole point.

"To see a young person discovering the cat in them, your jaw just drops with delight," he told ET. It's such a delight, in fact, that the actor joked he'd gladly return for another round. "I'm going to make the sequel, which is called Dogs!"

More like this
You Definitely Know The Voice Of Shuri's AI In 'Black Panther: Wakanda Forever'
By Brad Witter
This James Bond Event At Abbey Road Studios Was A 007 Fan's Dream
By Samantha Rollins
The 'Love Actually' Reunion Is Missing A Major Player
By Bustle UK
What Jen Shah's Delayed Sentencing Could Mean For The 'RHOSLC' Season 3 Reunion
By Brad Witter and Jake Viswanath
Get Even More From Bustle — Sign Up For The Newsletter