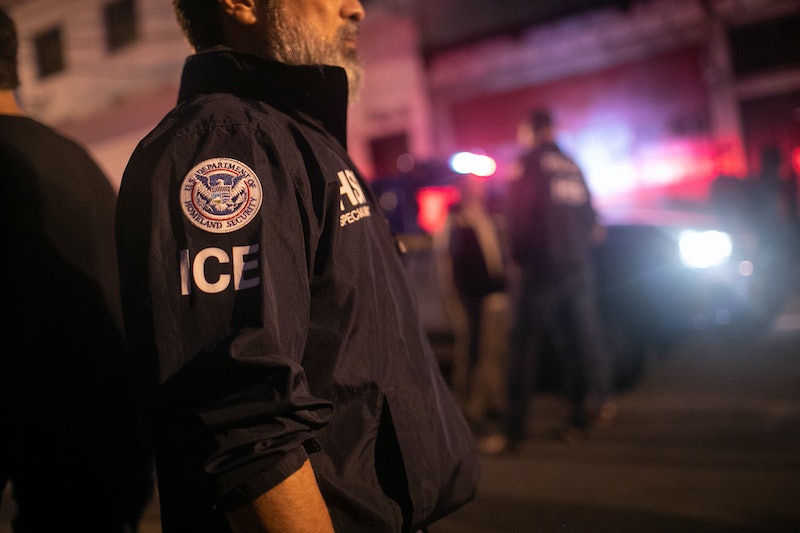 U.S. Immigration and Customs Enforcement (ICE) has reported seeing a dramatic increase in the number of immigrants exposed to highly-contagious viral infections. According to CNN, ICE has quarantined 5,200 immigrants for mumps or chickenpox exposure after confirmed cases of the diseases were reported at 39 different immigration detention centers.

UPDATE: In a statement to Bustle, Nathalie Asher, executive associate director for ICE Enforcement and Removal Operations (ERO), said the agency considered the influx of Central American immigrants at the Southwest border to be a contributing factor to the current mumps outbreak. "With 75 percent of our current detention population coming to us directly from the border, the fact that we're seeing mumps in nearly 40 facilities across the country and recent outbreaks of mumps in Central America, the preponderance of evidence points to the major influx at our Southwest border being, at minimum, a significant contributing factor of these occurrences," Asher tells Bustle.

In a statement, ICE said it had confirmed a total of 334 cases of mumps among detainees in custody from September 2018 to June 13. While the agency has seen cases of contagious diseases like the flu, measles, and even chickenpox before, September was reportedly the first time ICE had recorded any confirmed cases of mumps in its shelters. The initial source of the disease and how it spread remains unknown, CNN reported.

For detained immigrants, however, the exposures and subsequent quarantine can impact how long they remain in ICE custody and how active they're able to be in their own immigration hearings. "From an operational perspective, the impact is significant in the short and long term and will result in an increase in cohorted detainees' length of stay in detention, an inability to effect removal of eligible cohorted detainees, and postponing scheduled consular interviews for quarantined detainees," Asher said in a statement.

Quartz has reported that quarantined immigrants in ICE custody can face barriers to accessing or communicating with their attorneys and attending immigration court proceedings that can ultimately lead to the length of their detention being increased or "a denial of the rights U.S. law guarantees asylum seekers."

According to Reuters, ICE first reported having quarantined a number of adult immigrants in March, after it identified roughly 236 "confirmed or probable cases of mumps" in 51 facilities. At that time, an ICE spokesperson told the news outlet that 2,287 immigrants in ICE custody had been placed in quarantine over exposure concerns.

Although exposure rates appear to have increased in recent months, Asher appeared confident that the agency would be able to manage the spread of the disease. "I think there is heightened interest in this situation because it's the mumps, which is a new occurrence in custody, but preventing the spread of communicable disease in ICE custody is something we have demonstrated success doing," Asher said in a statement provided to Bustle.

According to the Centers for Disease Control and Prevention (CDC), an outbreak of mumps can commonly occur among individuals who maintain "prolonged, close contact," such as "living in close quarters," with someone who has the disease. Symptoms typically include fever, headache, muscle aches, and swelling in the salivary glands and appear roughly 12 to 25 days after infection, the CDC reports. As a result, ICE is reportedly keeping any individual thought to have been exposed to the disease in quarantine for 25 days from the last incubation period, CNN has reported.