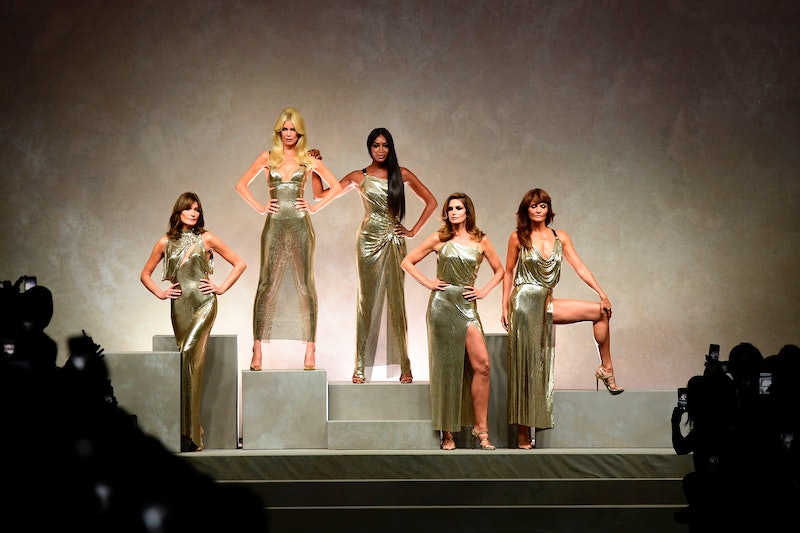 Move over Gigi Hadid and Kendall Jenner, because there's a new squad in town. Or should I say the original model squad is back. Five iconic supermodels walked the Versace runway during Milan Fashion Week to honor Gianni Versace on the 20 year anniversary of his death. Truly, there's no better way to honor the designer's life than with incredible Gianni-inspired fashion, good music, and iconic models.

It's been 20 years since Gianni Versace was shot and killed at his home in July 1997, and the Milan Fashion Week show was the perfect chance to celebrate of his life and legacy. According to The Guardian, Donatella Versace put together the show based on the prints from Gianni's collection from 1991 to 1995.

“Gianni was all about joy and so full of life, and the prints really express that spirit," Donatella said, according to the publication.

That wasn't the only way they celebrated his work, either. The designer was known for taking the average model and making them icons, and five of them walked the show to honor him.

The Milani Fashion Show finale included iconic supermodels Carla Bruni, Claudia Schiffer, Naomi Campbell, Cindy Crawford and Helena Christensen. The women looked absolutely stunning in different cuts of all gold gowns. They were all, quite literally, glowing as the came down the runway and then posed in the classic supermodel positions are the end.

In case you're still not understanding how major this moment is, consider that Gianni is officially credited with creating the supermodel. According to British Vogue, he agreed to pay high sums to models like Naomi Campbell, Cindy Crawford, Linda Evangelista and Christy Turlington, singlehandedly transforming them into high-demand models. So it's no surprise that these women were the ones that graced the runway in honor of the designer.

They made their runway comeback to the song "Freedom" by George Michael. In case you don't remember, both Campbell and Crawford appeared in the original video for the song, which was inspired by Peter Lindbergh's now-iconic portrait.

Bringing back these iconic models wasn't the only way that Donatella celebrated the designer's life through the show. Like I said before, every outfit that walked the runway was inspired by Gianni's designs.

“But today I am not sad. I am happy that after 20 years I can finally do this with a smile on my face,” said Donatella in an interview with The Guardian. “They have a green room each, but they are running in and out of each other’s rooms all day. And because they walk the runway together they are arguing about who gets to go in the middle, just like the old days.”

The iconic models didn't walk the entire time. The fabulous five sported the all-gold designs just for the finale. In fact, Gigi Hadid was one of the millennial-born models that graced the runway before the the icons came out. Kaia Gerber, Crawford's daughter, also walked in the show, which is a beautiful full-circle moment for the duo.

Crawford recently named the '91 Versace show as her favorite fashion moment of all time. You know, the last time you saw all of these five models together walking the runway. Although this time they weren't lip syncing the George Michael song. Instead, they stayed looking fierce following Donatella down the runway, all holding hands.

Though the five models were at their prime throughout the '90s, their influence isn't going anywhere in the fashion world. But if this is the last time we see them all together on the runway, knowing that it's for an incredible reason is all worth it.