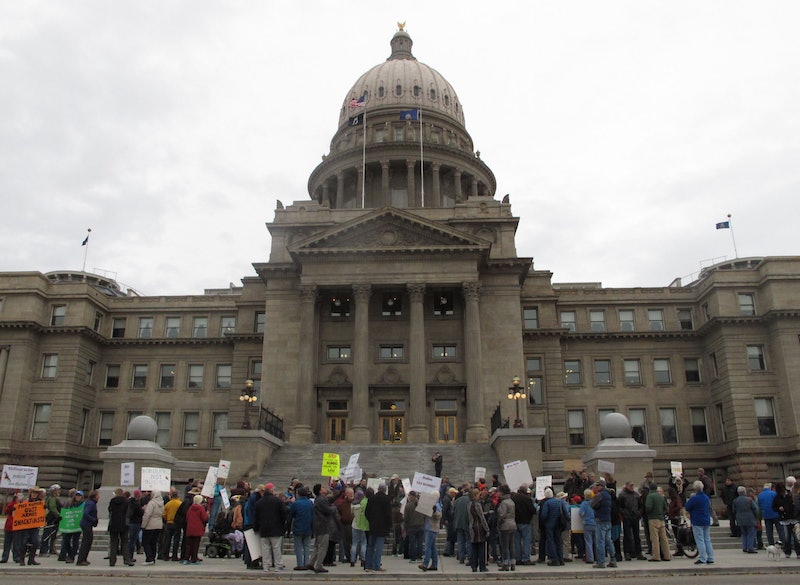 Idaho has the highest rate of child marriage in the country, according to a report published last year by advocacy group Unchained at Last. This week, state lawmakers had a chance to change that — but the state's GOP-led House of Representatives voted down an Idaho child marriage bill that would have set the minimum age to get married at 16 years old.

Of the 38 states that Unchained at Last studied in its report, Idaho reported having the highest rate of child marriage, at 0.29 percent. From 2000 to 2010, 4,080 minors got married in Idaho, per the report, with the youngest being 13 years old. According to Newsweek, Idaho law currently permits children under 16 to get married as long as they have both parental and judicial consent. Children who are 16 or 17 years old, meanwhile, merely have to obtain parental consent to be married.

To address this trend, Democratic state Rep. Melissa Wintrow proposed a bipartisan bill that would prevent children under 16 from getting married. “Instead of ending child marriage outright, this is a modest approach to bring it in conformity with our statutory rape laws," Wintrow said, per the Idaho Statesman.

However, the state's House voted 39-28 against the bill in an effort led by GOP lawmakers, according to Boise State Public Radio.

Republican state Rep. Christy Zito, argued that passing Wintrow's proposed legislation would make it "easier in the state of Idaho to obtain an abortion at 15 years old than it will to decide to form a family and create a family for a child that has been conceived," the Idaho Statesman reported. Idaho law currently allows minors to obtain an abortion with the consent of one parent or a judge.

Other Republican opponents to the proposed child marriage bill argued that it would result in excessive government and judicial oversight, per The Hill. State Rep. Bryan Zollinger argued that he did "not think courts should be involved in marriage at all,” the Idaho Statesman reported, while state Rep. Julianne Young insisted that the decision to get married "should belong with families."

"I believe parental consent, which is what is in the law right now, should be sufficient,” Young said. “We already require a judge to sign off if a person is under 16.”

After the bill failed to pass, Wintrow lamented what she described as "a sad day in the Idaho House."

"What I thought was a modest compromise to try to prevent coercion and potential abuse of children, by raising the floor on the marriage age to 16 — let me repeat, 16 — turned out to be too progressive for too many of my Republican colleagues," Wintrow wrote on Facebook.

According to Newsweek, child marriage was legal in all 50 states until last year, when New Jersey and Delaware both banned the marriages of children under 18. Citing international NGO Girls not Brides, Newsweek reported that 12 million girls around the world are married before they turn 18.