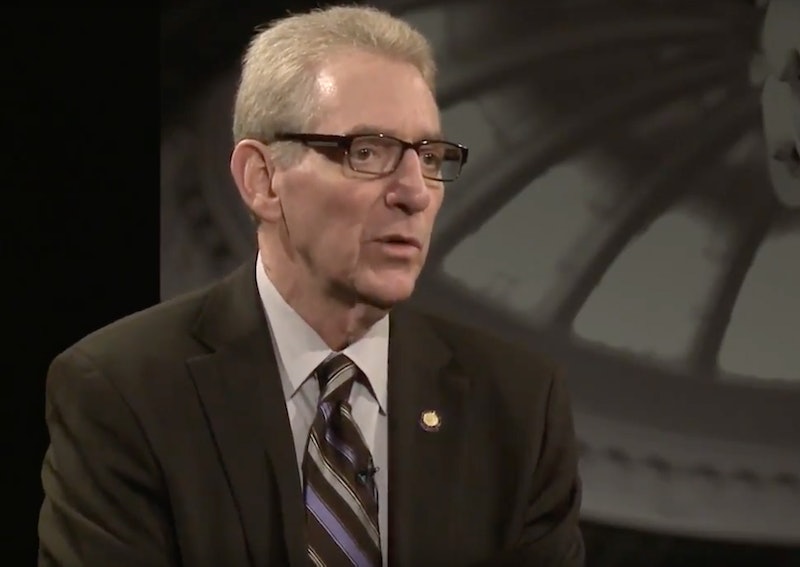 An Idaho lawmaker is trying to backtrack a horrifying stance he took on Monday about abortion penalties. Bob Nonini, a Republican state senator who's running for lieutenant governor, reportedly agreed when a debate moderator said that women who get abortions should get the death penalty. The news went viral later in the week, showing Nonini's abortion comment can't be unsaid.

The Associated Press on Tuesday first reported Nonini's remarks from a candidates forum organized by CrossPolitic, a conservative podcast that works to bridge a perceived gap between religion, politics, and culture. "There should be no abortion, and anyone who has an abortion should pay," Nonini said at the forum.

When asked whether women who terminate their pregnancies should "pay" with the death penalty, Nonini apparently nodded. The AP reports that it confirmed that was his position in a phone interview with him afterward.

But now, the senator wants to take it all back. "I NEVER said or agreed that the death penalty should be an option," Nonini said in a statement on Tuesday. He still says he's in favor of instituting harsh penalties for abortions, though, because he thinks it would deter women from getting the procedure.

"The statute alone, the threat of prosecution, would dramatically reduce abortion," his statement read. "That is my goal."

Data on abortions from before the days of Roe v. Wade — the case ruling that women had a legal right to an abortion — is hard to come by. The limited statistics available suggest that hundreds of thousands of women got abortions both before and after the procedure was legalized. One 1953 estimate held that between 200,000 and 1.2 million abortions were performed illegally every year. Compare to 2014, when the Center for Disease Control and Prevention reports that 652,639 legal abortions were performed.

Nonini also wrote that because "prosecutions have always been focused on the abortionist," any penalties instituted wouldn't actually seriously hurt women. "There is no way a woman would go to jail let alone face the death penalty." He continued:

I strongly support the overturning of Roe v. Wade. However, it is my understanding that in the history of the United States, long before Roe was foisted upon this country; no woman has ever been prosecuted for undergoing abortion. That is for practical reasons, as well as for reasons of compassion.

So, confusingly, Nonini is saying that he wants to put laws on the books that he doesn't want enforced. However, the numbers show criminalizing abortion forces women to turn to other illegal, and often less safe, methods. In 1947, right in the middle of the long period in which abortion was outlawed in the United States, 700 women died due to complications from illegal abortions. The CDC reports that four women died from legal abortion complications in 2012.

CrossPolitic, for its part, is ready to defend Nonini's original stance. In a blog post published Thursday, the organization wrote that it's not absurd to consider the death penalty for women who "murder" babies. They wrote that "hypocrisy is deep and thick" on the issue, and that "the only thing that can wash away the blood on our hands is blood."

Two other candidates for Idaho's lieutenant governor attended the forum on Monday. Neither one agreed that the death penalty is a viable punishment for women who terminate their pregnancies.

"No, I cannot support a woman facing the death penalty for having an abortion," Republican Janice McGeachin said.

The third candidate in attendance, Steve Yates, doesn't appear to have directly addressed the death penalty question, but he implied that he was not in favor of the punishment. "In terms of criminalizing things, I have no problem with that except that doesn't always solve the problem," he said.

In Idaho, first-degree murder is punishable by death or life imprisonment. Both state Senator Dan Foreman and the organization Abolish Abortion Idaho have separately introduced legislation in the last couple of years that would classify abortion as first-degree murder.