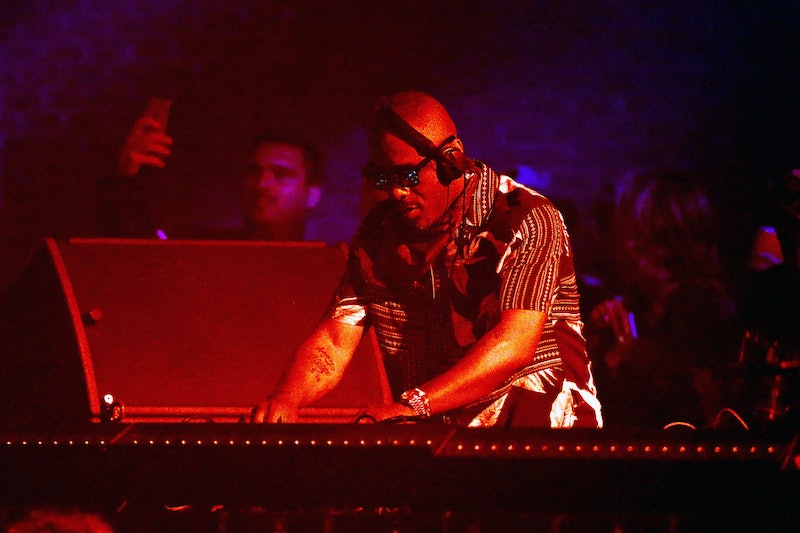 People's Sexiest Man Alive, award-winning actor, and now DJ? Yes, Idris Elba's Coachella set on Saturday night proved that he really can do it all. Per People, Elba made his Coachella debut as a DJ, performing under his own name instead of the stage name he's been known to use, DJ Big Driis.

But it was all Elba this time, and luckily he had the support of his fiancée Sabrina Dhowre and daughter Isan. Both Dhowre and Isan documented Elba's performance on Instagram. Dhowre posted multiple videos of the high-energy set as Elba danced in the booth as red and blue lights lit the crowd. And Isan posted a photo of herself next to her father captioned, "Coachella weekend... day 1!" She also posted a video on her Instagram story of Elba's set with the caption, "Come through with the old town remix," referring to the hit song "Old Town Road" by Lil Nas X featuring Billy Ray Cyrus.

Isan even revealed that she skipped her own prom, opting to support her dad instead. Elba was surely feeling his family's love during the packed weekend when he took to Instagram himself to share a selfie of him wearing a pair of headphones, writing, "You ready @coachella?????? I am!!!!! Game face let's get it."

Even with all of the buzz surrounding Elba's high-profile set at Coachella, this might not even be his most exclusive gig to date. Though Coachella was definitely a milestone achievement for the actor with him telling People, "I've worked my whole life to play at Coachella. I made it at 46! I nearly passed out when I found out."

However, some would count, I don't know, performing at the Royal Wedding of 2018 as pretty monumental. It's true, Elba turned tables at the ultra hush-hush wedding reception of Prince Harry and Meghan Markle. "Harry's a friend of mine," he told The Guardian, adding that he was able to score an invite because he knows the royal "just from round the way, haha! He's a neighborhood lad!" Although he had to stay pretty tight-lipped about the affair, he did share how special the event was. "I try not to talk too much about it, because it was a private day, but it remains one of the highlights of my life, for sure," Elba told The Guardian. "It was a beautiful experience, like all weddings are."

Elba's musical roots run deep, and he's made it clear that he wants his turntable talent to stand out separately from his celeb status. In a Coachella promo video released last week, Elba talked about his approach to music. "The reaction to me deejaying at Coachella was, 'What?' It was on CNN like, 'Idris Elba's deejaying at Coachella this year and it's going to be amazing!' I'm like, 'Yeah, if you like my kind of music,'" he said during the video. "Like, really famous musicians are like, 'Oh I'm going to listen to him deejaying.' I'm like, wait a second. I play really hard, cerebral tech. One of the things that drives me as a deejay is that I want people to walk away and go, 'I expected him to be sh*t. He was alright.'"

Clearly, fans were into Elba's Coachella debut and his family is sure to be standing by his side when he takes the Indio, California stage again on April 20.