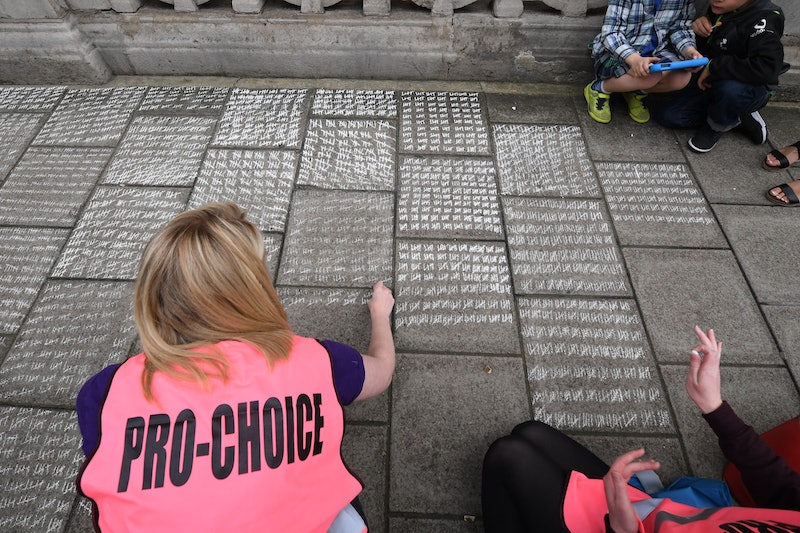 Many women don't know that they're pregnant by their sixth week of pregnancy. Assuming that a woman's periods are regular, that's right around the time that a cycle becomes noticeably off, and when many women might elect to start taking pregnancy tests. But, if certain Republican lawmakers had the choice, they'd elect to ban abortions starting at right around six weeks, before many women even had time to consider whether they wanted to have a child. If this six-week abortion ban passes, at-risk mothers occupy a sort of gray area that would undoubtedly be dangerous. (For reference: at-risk, or high-risk, mothers are women who risk serious injury, or even death, during childbirth or pregnancy.)

Dubbed the "Heartbeat Protection Act of 2017," the bill, scheduled for a Nov. 1 debate before the House Judiciary Committee, makes it illegal to perform abortions on women once a fetal heartbeat is detected, which for many could be as early as a month and a half into pregnancy. It would require physicians to check for a heartbeat, to share those results with the mother, and, in the case that a heartbeat is detected, ban that abortion from taking place.

Two psychological conditions frequently associated with pregnancy are post-traumatic stress disorder (PTSD) and postpartum depression, both of which occur as a result of pregnancy and/or childbirth. It's not entirely possible to reliably predict whether either of these will develop from woman to woman, but there are risk-factors, such as having a history of depression or bipolar disorder. As with many mental health issues, PTSD and postpartum depression can present themselves physically, and can be associated with thoughts of suicide. While not classified as a physical disorder, their symptoms can be severe and can also risk physical harm. It's entirely reasonable that a woman with either a personal or familial history of emotional trauma might elect not to become a mother, a decision which the heartbeat bill does not allow for. The bill also does not provide exceptions for cases of rape or incest.

The piece of legislation was originally introduced to the House by Rep. Steve King back in January, before Trump was sworn in as president.

“Since Roe v. Wade was unconstitutionally decided in 1973, nearly 60 million innocent babies' lives have been ended by the abortion industry, all with a rubber stamp by the federal government,” King said in a press release at the time. “Human life, beginning at the moment of conception, is sacred in all of its forms and today, I introduced a bill that will protect the lives of voiceless innocents."

Last December, an eerily similar heartbeat bill was vetoed in Ohio by Gov. John Kasich. That bill also sought to ban abortions once a heartbeat was detected. The Washington Post reported that Kasich declined to support the bill because he expected it to be struck down if and when it made it to the Supreme Court. The Supreme Court, in Roe V. Wade, upheld abortions to the "point at which the fetus is viable," making the six week bill an apparent affront to that standard. As Franklin Foer explains in Slate, viability means that a fetus has a strong chance of long-term survival if separate from its mother.

Newsweek reported that Rep. King believes his heartbeat bill has a fighting chance because, by the time it could potentially reach the Supreme Court, he believes Trump will have had the opportunity to appoint a pro-life justice. The ultimate goal, then, would be to defang or overturn Roe V. Wade, which nationally legalized abortions in 1973.

The Heartbeat Bill of 2017 primarily seeks to punish physicians who perform abortions after six weeks, but by banning abortions so stringently, some mothers are also being punished, even if not with jail time. They could be forced to live with mental and physical health conditions that could have been avoided if they were simply given control over their own medical decisions. But as we continue to see an increased interest in policing women's health, that seems to be, for some, too much to ask for.