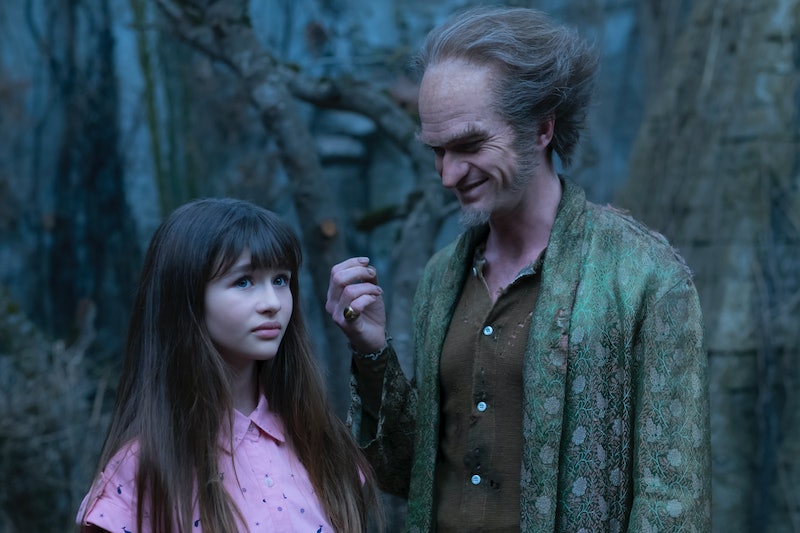 A Series of Unfortunate Events has been adapted for the second time and hits Netflix on Friday, Jan. 13. While the movie had its highlights, the new series promises to be a fittingly dark and comedic take on the original books series by Lemony Snicket (aka Daniel Handler). Over the course of its eight episodes, the first season adapts the first four books. However, there are 13 books in the series, giving the TV show plenty of room to grow. And if A Series Of Unfortunate Events returns for Season 2, which is all but guaranteed, fans will have a good idea of where the plot is headed thanks to the source material.

Though Netflix hasn't officially renewed the series, executive producer Barry Sonnenfeld told Variety that they've already started writing scripts for another season. So as soon as Season 2 is ordered, they'll be ready to to go. Sonnenfeld also said that the plan is for the second season to cover the next five books in the series, and then to have a potential third season adapt the final four. Those next five books in A Series of Unfortunate Events are The Austere Academy, The Ersatz Elevator, The Vile Village, The Hostile Hospital, and The Carnivorous Carnival. Since Season 2 seems incredibly likely, here's what you should know about the Baudelaires' next unfortunate experiences.

Imagine a pleasant, educational boarding school where students have a sanctuary to learn, grow, and socialize. It's filled with flowers, library books, and the sounds of laughter. Now imagine the exact opposite of that. In the fifth book of A Series Of Unfortunate Events, the Baudelaire children are put into a world filled with bullies, an orphan shack, and Count Olaf disguised as a horrible gym teacher at the Prufrock Preparatory School. It's a very bleak place, even compared to the other locations the orphans have been forced to call home.

Luckily, each book gives the Baudelaire children clues as to what is really happening and in The Austere Academy, those clues come courtesy of their new friends, the Quagmires. Friendship, love, and hope are of high value in this series, but unfortunately, it doesn't last long before the Quagmires are kidnapped. They do manage to give the Baudelaire children their first concrete clue about Olaf and his motives first, by shouting "V.F.D" as they are being kidnapped.

Even villains need love and that includes Count Olaf, whose girlfriend is just as awful as he is. In this book, the Baudelaire children find themselves with Esmé, who is obsessed with what is "in" and what is "out," forces them to wear oversized pinstripe suits, yells at them for their mother (supposedly) stealing a bowl of sugar from her, and oh yeah, pushes them down an elevator shaft. She may be a terrible person, but I can't wait to see what great actor A Series of Unfortunate Events casts to play her.

Young adult fiction is often about growing up, discovering agency, and taking steps towards becoming an independent adult, which are central themes of The Ersatz Elevator. The beginning of the book series shows our three young heroes dragged through unfortunate event after unfortunate event. Though they are clever, hardworking, and resilient they do not have much agency in what happens to them. By the end of The Ersatz Elevator, however, the Baudelaire children become active protagonists in their choice to help save their friends over running away and it marks an important shift in the series.

Taking advantage of some of that agency, the Baudelaires choose their next guardians based on the V.F.D clue that was given to them. They end up in a village full of crows, trying to find the Quagmires. The more mysterious elements of the series are heightened in The Vile Village, as the Baudelaires must solve a series of riddles to find their friends. Clues are everywhere for the children to notice and being the resourceful children they are, they're able to put them together.

However, their luck doesn't long, nor should we have expected it to. A fake Count Olaf is murdered, the Baudelaire children are framed for it, and it's very unfortunate.

A strange hospital, complete with singing volunteers, becomes a momentary safe haven for the children, but soon turns nightmarish. Olaf and Esmé appear at the hospital in disguise and capture Violet. Olaf announces that he is going to preform a "craniectomy" and cut off her head and though Claus and Sunny save Violet, it's still absolutely terrifying. With a hospital basically turned into house of horrors, this may be the creepiest book of the bunch — and could make for some truly scary episodes of TV.

On the bright side (or as bright as it gets for the Baudelaires), each book leads to new clues about what happened during the Baudelaire fire, who Count Olaf is working with, and how the children can eventually break the cycle of unfortunate events, and The Hostile Hospital is no different. The big clue dropped here is that someone may have survived the Baudelaire fire. If the entire series is about the children trying to find a safe home, this is the first sign that a safe home may actually exist.

Be warned, in the same Variety interview Sonnenfeld said that the second season would include this book because "there’s a natural break after ‘Carnivorous Carnival’ for a really scary ending to the season." The title gets its name from the Caligari Carnival, where Olaf unknowingly brings the Baudealires, who are able to disguise themselves as circus "freaks." The scary ending Sonnenfeld is referring to is when Olaf reveals that he knows they're the Baudelaires at the worst possible moment: as the circus troupe is driving up the mountains in a caravan, seemingly headed to a secret V.FD. base. The book ends with Olaf cutting the Baudelaires' trailer from his car, leaving them to tumble down the side of a mountain.

There are so many juicy, unlucky things to be explored in a second season of A Series of Unfortunate Events. If we never get to see these stories adapted for TV, that would be unfortunate.