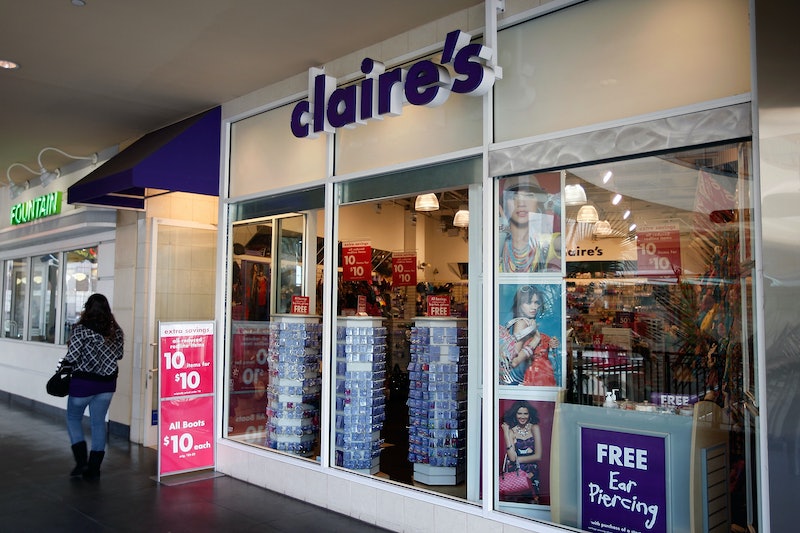 It's hard to imagine an American girl or woman between the ages of 10 and 35 who doesn't have a significant memory or profound life experience inside of a Claire's Accessories, the purple and pink beacon of butterfly-clipped hope that seemed to have an outpost inside of every. single. mall. In fact, it almost did: In the '90s, Claire's had over 1000 stores across the country. By 2006, there were over 3,000. When Bloomberg reported on March 8 that Claire's was filing for bankruptcy, the pain of losing such an iconic mall mainstay was palpable — across the internet, many former Claire's callers were inconsolable at the thought.

I asked friends and acquaintances about their experiences at Claire's, and their answers made it clear that the experience of shopping there was about so much more than adorning ourselves with jewelry that would inevitably turn our flesh green. Some of us pored over merchandise, weighing pros and cons, and learned how to make difficult financial decisions, perhaps for the first time. "Can we talk about how hard it was to find 10 items for $10," Chynna White wrote to me, remembering a particularly popular Claire's offer. "THE PRESSURE."

Others stepped into both Claire's and what may have very well been their first ethical crisis. "I definitely shoplifted a series of lipsticks from them in seventh grade, when I was trying out the whole experiment of not paying for items that I thought I could easily just take," says Anna Scott, a friend. "I totally shoplifted from Claire's in junior high," my colleague Erica Tremblay tells me. "I didn't get caught by the store but my dad found out and it was very dark times." Of course, shoplifting was not OK — but in those budding, immature Claire's moments, it was easy to convince yourself it was a valid choice.

Then there is perhaps the most memorable Claire's experience: Getting pierced. People speak of their first Claire's piercing with solemn respect, an exploit akin to religious sacrament: The sound of the piercing gun cranking into our virgin lobes and the smell of the antiseptic solution were our holy communion; cleansing and twisting three times a day our dutiful penance. I got my first piercing there at eight years old. I remember stoically holding my head high and staring off into the unknown, the encouraging words of my mother dissolving into ambient noise as the sales associate drew dots on my earlobes. In that moment, I knew that something inside of me was about to change. I'd never felt more ready.

That wasn't the only time that Claire's made me feel in control of my young life, either. It was the only place in the mall that actually gave me choices. I was too tall and chubby to fit into clothes at places where my friends were shopping, like The Limited Too, Express, and American Eagle. My size forced me to hover on the outskirts of those stores and hope that no one would notice I wasn't trying things on. At Claire's, all of us could shop together — and more importantly, everything fit. Inside of a Claire's, the awkward, chubby Amanda was gone, and the ultra-feminine girly-girl was free to express herself, spinning through the Austrian mountainside like Maria Von Trapp — if the Austrian mountainside was made of display carousels packed with nickel-free earrings and Maria only fit into frumpy men's cargo pants.

These are the memories that came flooding back to me when I heard the news that Claire's filed for bankruptcy — for millennials and even a few Gen X'ers, it's hard to imagine a childhood without it. It's not just us, either — many of my friends and colleagues have their own children now, and from what they tell me, Generation Z shoppers have also been seduced by the glittering promise of affordable gorgeousness at Claire's.

"I shopped there and I love taking my daughter there," Lauren Crauthamel-Divis, a friend from high school tells me. "It's one of her favorite stores, had her ears pierced twice there."

"Memories?!" another friend, Lucille Murphy, writes. "You mean from last week!? My 10-year-old is OBSESSED with Claire's. Except they sell garbage so she goes in there with that damn gift card someone gave her at Christmas and spends 45 freaking minutes trying to decide which three items she's buying — 'buy one get two free' because she doesn't actually want anything in there but she has spending power damnit!"

I'm at an age now where I recognize and understand the impatience and frustration of a mother inside of a Claire's, the likes of which I must have forced my own mother to feel dozens of times (sorry, Terri). But if I'm being honest, I relate to the indecisive little girl on a much deeper level. In fact, I think in some ways, I still am that little girl, carried away by the idea that I have money to burn on the things that I don't need, but definitely want.

There is no news on if or when Claire's will actually shut its doors — Bloomberg reports that the store's current debt load is more than 10 times it's actual earnings. Despite that, Claire's could theoretically still operate, especially if another company steps in to help. If they do shut their doors, though, a little part of me will remain inside when the padlock clicks shut, eternally choosing between a lip gloss or an elastic choker, knowing that in one way or another, Claire's will make me feel like I have it all.

More like this
To The Beauty Products I'll Never Use
By Alix Strauss
Are Skater Shoes the Next Y2K Trend to be Revived by Gen Z?
By Lauren Alexis Fisher
Stacey Solomon & Joe Swash Have The Sweetest Relationship Timeline
By Orla Pentelow and Frances Stewart
Most Comfortable Underwear For Big Butts
By Audrey Williams
Get Even More From Bustle — Sign Up For The Newsletter