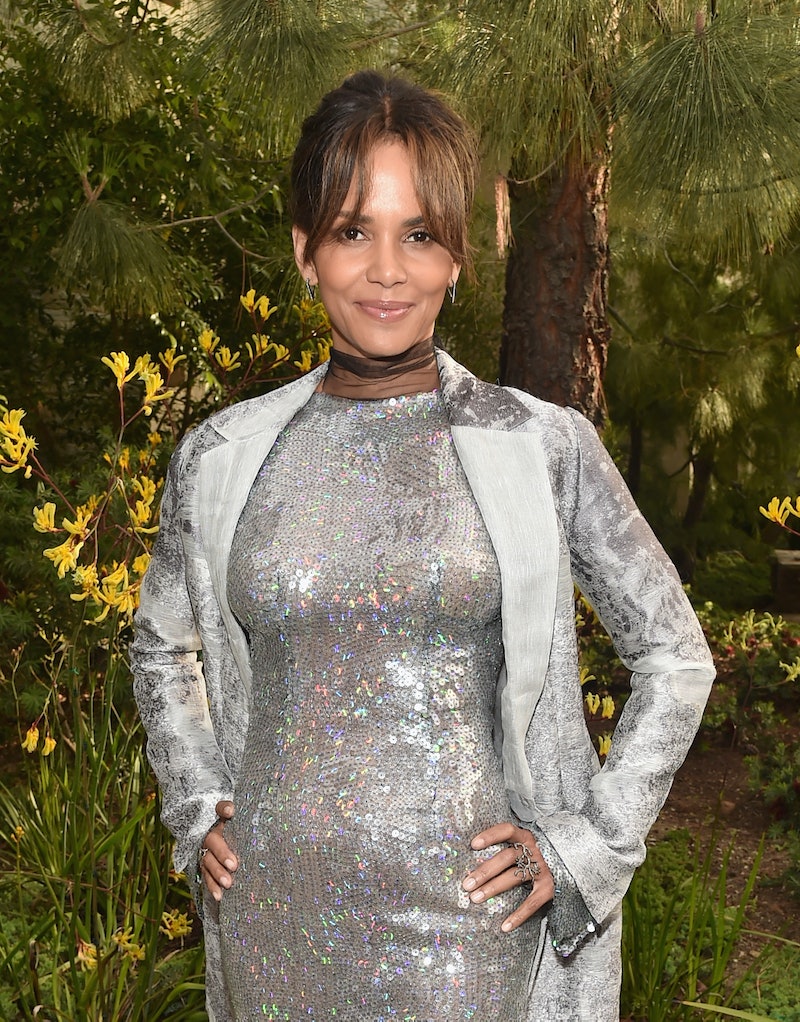 If a woman says she's not pregnant, believe her. If you haven't heard, Halle Berry isn't pregnant, her rep told Us Weekly Monday. "It is absolutely not true," the 50-year-old actor's rep said about the rumors in a statement. If that isn't enough clarification for you, Berry also took to Instagram Monday and wrote alongside a photo of herself, "Can a girl have some steak and fries??"

Need she say more? One would think this would be the end of the conversation, but of course many people on Twitter and in Berry's Instagram comments can't leave things well enough alone.

Pregnancy rumors surrounding the X-Men star began circulating Sunday, June 4, at the Butterfly Ball held in Los Angeles. The Oscar winner posed for photos with her hands resting on her stomach. Granted, the pose was suspicious, because usually when someone takes a photo with their hands on their stomach they're cradling a baby bump. And that's what most everyone assumed was happening here.

However, as Berry's rep said, the actor is not pregnant. Maybe she was just comfortable posing like that? Maybe she felt more photogenic with her hands covering her stomach? Who the heck knows, but it doesn't matter. If Berry says she's not expecting a third child, then that's what we have to go by.

What doesn't need to happen is people continuing to speculate on Twitter or essentially accuse Berry of lying about not being pregnant. Here are just a few of the reactions to her saying she is not having another baby:

Why should everyone take Berry's word for it and drop the conversation? Hypothetically, let's say a woman really is pregnant, but lying about it. If that is the case, then she probably has a good reason. Maybe she wants to keep it to herself for the time being? Maybe there is potential for complications? In Berry's case, she is 50 and carrying a child at an older age comes with greater risks compared to someone who is pregnant at, say, 30. If that happened to be the truth, then, yeah, I would absolutely understand why she chose to try to put the rumors to bed so she could focus on herself and her future child. Again, this is all hypothetical, but if this was the case for anyone, then why add extra stress by not believing them?

Furthermore, why does it seem like when a female celebrity's body appears to be different than what people are used to seeing, then they must be pregnant? People's bodies can change for a variety of reasons and not everyone is going to look the same all the time. It's sad that Berry has even said she isn't pregnant, but people can't take her word for it.

There doesn't need to be any confusion or further speculation, because Berry has said her piece in two different ways: through her rep and on Instagram. Plus, she made a joke about all of the rumors, so why can't people just laugh with her, believe her, and move forward? And, no, she doesn't owe anyone an explanation about her hand placement.

Berry said she isn't pregnant, and until and unless she changes her words, that should be the end of the discussion.

More like this
Kelly Osbourne Found Love In Her Best Friend & Now They're Expecting
By Vivian Iroanya and Rachel Mantock
Is Megan Fox Pregnant? MGK Gave A Shout-Out To Their “Unborn Child” Onstage
By Hugh McIntyre
Sandra Bullock, Girlboss Extraordinaire
By Matt Harkins & Viviana Olen
Spice Girls’ Net Worth: The Richest Member Is Wealthier Than The Rest Combined
By Hugh McIntyre
Get Even More From Bustle — Sign Up For The Newsletter