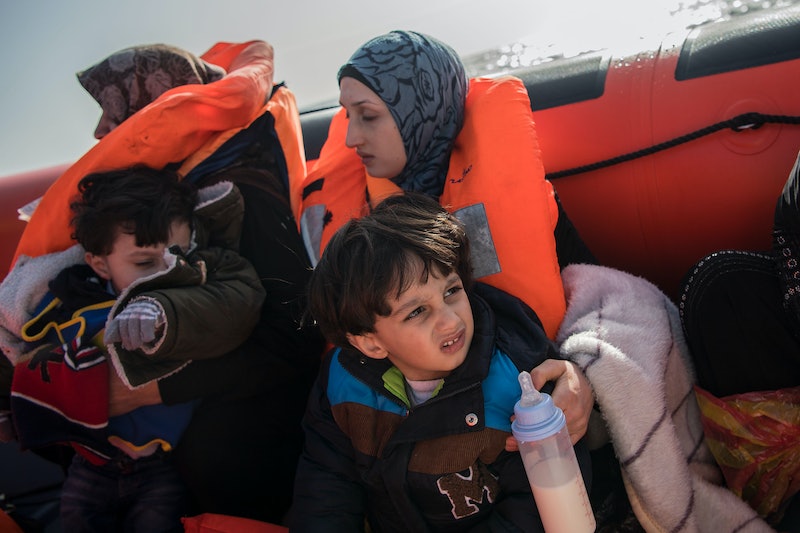 President Trump's reasoning behind the missile strike that he ordered on Syria was vaguely humanitarian in nature — innocent children killed by chemical weapons, crossing many lines, and so on. Taken in the context of the president's prior pronouncements on these innocent children, however, his words simply fall flat. The Syria missile strike means almost nothing if the United States doesn't act in a different way to save the children affected by the Syrian conflict: by accepting more refugees.

Trump's official statement of why he launched the attack stated that he wanted to "prevent and deter the spread of chemical weapons." He had apparently been heavily affected by the news coverage coming out after Syrian President Bashar al-Assad allegedly attacked his own citizens with chemical weapons. "When you kill innocent children -- innocent babies -- babies -- little babies with a chemical gas that is so lethal... that crosses many, many lines," Trump said, responding to the attack.

His care for innocent children, though, seems to only extend to innocent children killed by this specific chemical weapons attack. Remember, he was opposed to Obama getting involved in Syria the first time Assad used chemical weapons against the Syrian people. And since the time Trump stepped into the political sphere, he and his surrogates have gone out of their way to be totally unfeeling toward Syrian refugees.

There was Donald Trump Jr.'s infamous Skittles tweet, Steve Bannon's callous America First views that got him elevated to White House chief strategist, and, of course, candidate and then President Trump's Muslim ban. Trump's universally unfavorable view of Syrian refugees, which he has expressed at basically every chance he's gotten, doesn't disappear simply because now he's also used one breath to offer sympathy for them.

Trump claims that he's a brilliant man, but he apparently hasn't put it together that simply giving more of them the refuge that the United States offers would save them from the chemical attacks that he seems to be so bothered by. At least, that's a generous reading of the situation. His hypocrisy regarding Syrian refugees could also be evidence of any number of other, more despicable things — he wanted a pretext to drop a bomb; he wanted to distract people from the scandals enveloping his presidency; he wanted to exact revenge on Obama in some twisted way.

When it comes down to it, Trump's faux-humanitarian bluster is just that until he adopts truly humanitarian policies: letting in refugees from all over the globe and helping to integrate them into American society. If he keeps on trying to launch missile strikes on Syrian military targets while refusing to offer them safe homes that his country could very easily provide, then he should recognize that their blood will be on his hands too for as long as this war continues.