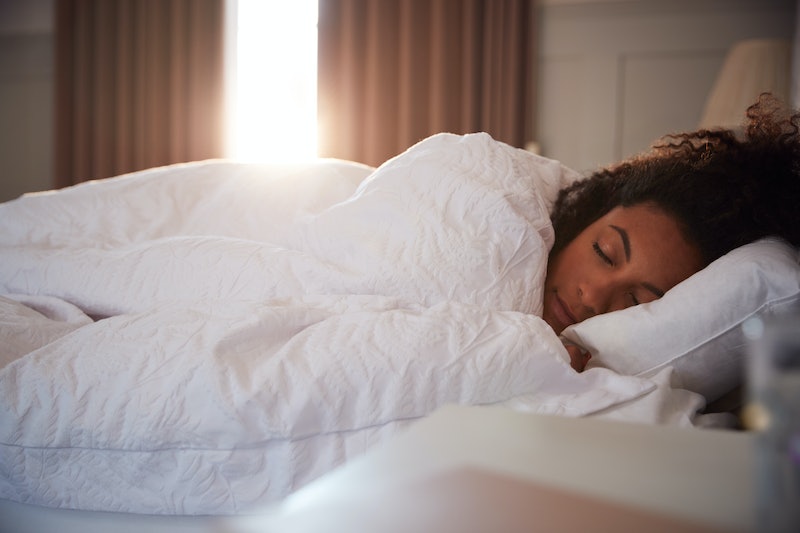 Cast your mind back to November 2017, when Rihanna revealed her secret to juggling her music career and her many business ventures (and this was before she announced Savage X Fenty and the Fenty luxury maison, so one can only imagine things have gotten even more intense). RiRi told Vogue Paris that she typically got only four hours of sleep a night — sometimes only three — which might sound hellish if you're a seven and up type of person. But here's the thing: there are, in fact, two "short sleep genes" that enable people to total just four to six hours of sleep and feel absolutely fine in the morning. Naturally a short sleeper? You might have a genetic mutation to thank.

In 2009, a team led by neurology professor Ying-Hui Fu, of the University of California San Francisco, discovered that people with a rare mutation in the gene DEC2 were natural short sleepers, usually getting an average of 6.25 hours of sleep a night compared to the 8.06 hours people without the mutation averaged.

"Before we identified the first short-sleep gene, people really weren’t thinking about sleep duration in genetic terms," Fu said in a press release. "Sleep can be difficult to study using the tools of human genetics because people use alarms, coffee and pills to alter their natural sleep cycles." The discovery of the DEC2 mutation changed that; however, as the press release points out, the rarity of the mutation meant it couldn't explain all the short sleepers out there.

The second study, published in the journal Neuron, sought to address that. Fu's team studied three generations in one family who were natural short sleepers — but didn't have the DEC2 genetic mutation. What they did have was a mutation in the gene ADRB1, which was linked with a shorter amount of time in bed.

Next, they bred mice with the same genetic mutation, and found that those mice slept an average of 55 minutes less over 24 hours than the mice without the mutation. In a press release, UC San Francisco said, "These experiments suggest that the mutant form of ADRB1 promotes natural short sleep because it helps build brains that are easier to rouse and that stay awake longer."

Here's where the jealousy might kick in: natural short sleepers don't face any of the usual health risks most of us do if we don't get enough sleep. "Today, most people are chronically sleep deprived. If you need eight to nine hours, but only sleep seven, you’re sleep deprived," Fu said. "This has well-known, long-term health consequences. You’re more likely to suffer from cardiovascular disease, cancer, dementia, metabolic problems, and a weakened immune system."

Previous studies have indicated, meanwhile, that natural short sleepers are more positive, better at multitasking, and more energetic, while they don't get jet lag and have a higher pain threshold (and they might even live longer, too.) But there's no need to seethe with envy just yet — we might all be able to reap the benefits of short sleeper research.

"Natural short sleepers experience better sleep quality and sleep efficiency," Fu said. "By studying them, we hope to learn what makes for a good night’s sleep, so that all of us can be better sleepers leading happier, healthier lives."

More like this
Here’s Where The NHS Nurses’ Strike Currently Stands
By Sophie McEvoy
Forestcore Is About To Take Over Your TikTok FYP
By Sam Ramsden
Pret & Costa’s Coffee Is The Strongest On The High Street, According To Which?
By Sam Ramsden
Here’s What TikTok's "Mascara” Trend Is *Really* About
By El Hunt
Get The Very Best Of Bustle/UK
Sign up for Bustle UK's twice-weekly newsletter, featuring the latest must-watch TV, moving personal stories, and expert advice on the hottest viral buys.