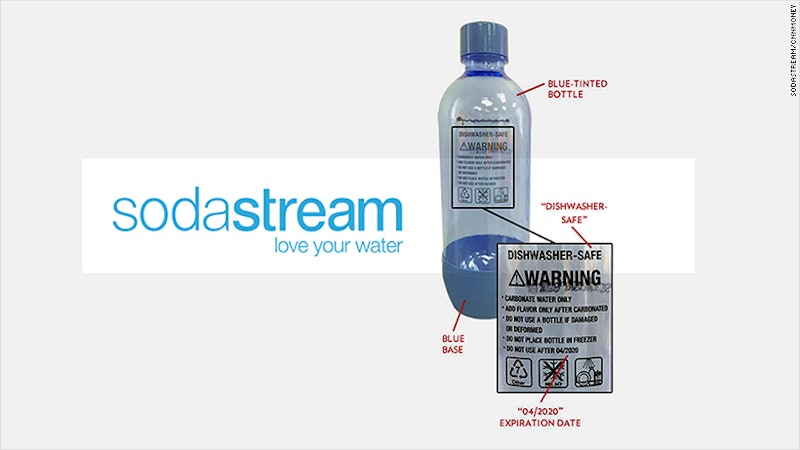 Here's some important health and safety news for anyone who's a fan of making your own fizzy drinks: SodaStream is recalling some bottles which might explode under pressure, a major safety risk. According to the SodaStream press release, approximately 51,000 such bottles were sold in the United States, meaning it's critical that all the people who bought them receive the news about the recall. There have not yet been any reported injuries, according to SodaStream, which put out the voluntary recall.

If you're the owner of a SodaStream, and you're concerned your bottle might be affected, the relevant details are laid out on the company's website. The affected bottles are the 1-liter, blue-tinted ones, labeled as dishwasher-safe with expiration dates of April 2020, and you can get a refund if you indeed own one. The bottles in question were likely sold over the course of the last year, so if you purchased a SodaStream over that time, you should definitely double-check.

"The bottles can burst under pressure, posing an injury hazard to the user or bystanders," SodaStream writes on its press release.

According to SodaStream's website, you can get a refund for the defective bottle, provided you answer a few questions to confirm yours is is indeed impacted by the recall. There's really no excuse not to take the situation seriously ― even though there haven't been any reported injuries so far, why take even the slightest risk? You wouldn't want to be the first.

SodaStream has reportedly characterized the hazard as the result of a "manufacturing defect." The problem has to do with the bottle's ability to stand up to the pressure that the carbonation process puts on it.

If you're unaware of SodaStream, it works like this: You can fill a bottle with water, screw it into a machine, and push a button to pump it full of carbonation. This lets people make their own sodas by mixing in flavoring or juices, or simply make their own fizzy water, if they so desire. This particular run of bottles is not up to the task, and could potentially explode if put under that pressure.

If you or a loved one owns one of these things, you really should do the right thing and make sure yours isn't included. Luckily, this recall went out before there were any reports of injuries.