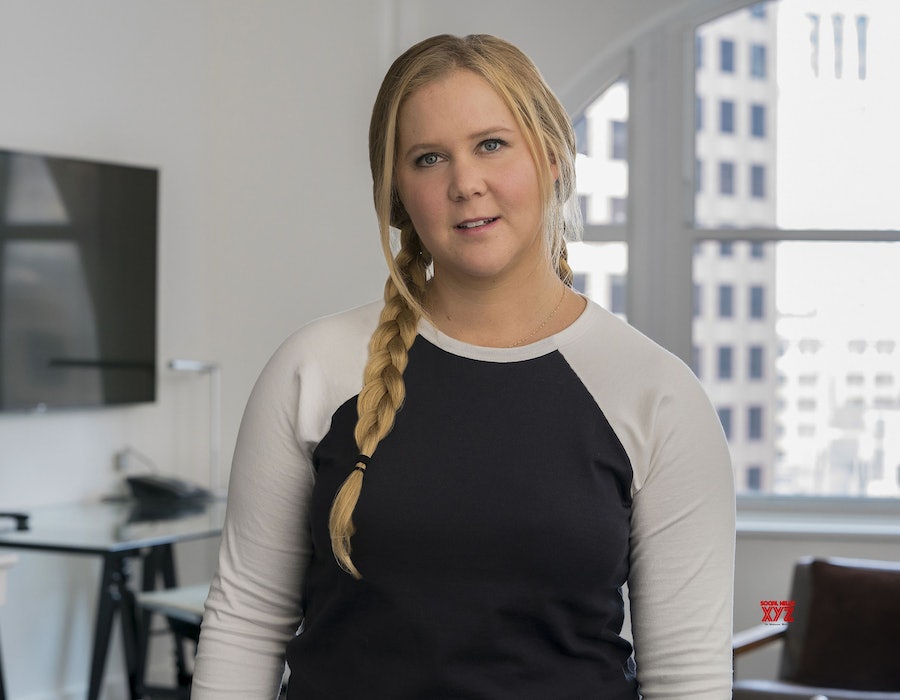 Actor, writer, producer, and director Amy Schumer is bringing her new movie, I Feel Pretty, to theaters on April 20. The film tackles intimate subjects like body image and self-confidence, but the I Feel Pretty trailer received some early criticism for its plot, which finds Schumer as a painfully insecure woman who hits her head and wakes up convinced she's gorgeous, with all the confidence in the world. At the time, some fans worried the movie would reinforce societal norms about the correlation between weight and confidence.

Well, Schumer hears you, but if you're hating on the movie before seeing it, you're making some unfair assumptions. Here's what she has to say about her experience with insecurity, I Feel Pretty, and womanhood, as told to Bustle's Movies Editor Rachel Simon.

It’s been great to see that from the moment the I Feel Pretty trailer released, it started a dialogue about so many things. But one thing that I really want people to realize, especially those who have not yet seen the film, is this isn’t movie about an "ugly" woman who finds confidence in her personality. It’s about an average woman who really struggles with self-esteem. And that's something we all do.

I felt very, very confident as a child. My parents kind of brainwashed me into thinking that I was the most beautiful girl in the world — and I bought it. But that didn't last. I started getting bullied. I'd hear mean comments here and there. That started to chip away at my confidence.

Of course, I would get that confidence back for short periods of time; in high school, for instance, I felt like I really knew who I was and had a real identity. I felt great about myself. But then came college. When you're there, you're judged by how you look, and it takes a while to let people know your worth. During freshman year, I felt really invisible. And it didn't stop after college; for years, I felt insecure when I was dating. I’m not the girl that somebody saw across the bar and said, "I have to meet you, you’re so hot." I’m the girl you’re friends with, and then you fall for because of who I am and what I really have to offer.

Even now, it's a constant, uphill battle to keep my self-esteem where it has the right to be. I still have days where I feel like hot garbage — especially when I have my period. But I have a really good baseline for feeling good and strong. I’m good with myself and who I am and what I do. Rude comments no longer hurt me (I think I’ve gotten desensitized because of, like, 10 years getting trolled so hard on the internet). And I've learned that when other people go out of their way to make me feel bad, it says a lot more about them than it does me. I can’t imagine how bad my life would have to be to go out of my way to say something mean to a person I’d never met on a message board. (If I found out one of my friends posted something rude to Kim Kardashian on Instagram, for instance, I would take them out of my phone. It’s just so weird.)

But while I mostly feel good about myself now, I know plenty of other women don't. I wanted to make I Feel Pretty to empower them to live up to their full potential and to get out of their own way. As for those who've criticized the movie's plot, well, most of them haven't actually seen the movie yet, just the trailer. Here's the reality of it.

There were those who said my character shouldn't feel insecure about her size. But it’s not anyone’s place to tell someone whether or not they have a right to feel bad about themselves. When you try to convince your best friend to see how beautiful she is, you don’t get mad at her and say she doesn't have a right to feel that way.

Then there are the objections to information that wasn't even in the trailer. People asked on Twitter why my character, Renee, had to see herself as thin to feel beautiful, but that's not quite accurate. We never actually see what Renee sees her "new" body as in the movie. And when I filmed the scenes where she looks into the mirror, I didn’t picture myself any thinner than I am. That's just what they assume I saw.

But here's what I saw when I looked into that mirror: myself. I was really looking at myself and falling in love with the whole package that I came in. That’s the truth. People just projected hard, and I understand why — it’s f*cking hard to be a chick. We’ve all had so much pain and emotion attached to the portrayal of body image on-screen that people are ready to get mad.

But maybe, just maybe, I Feel Pretty will help people more than they realize. I really hope that they give it a chance and have a good time and laugh and feel a lot better about themselves. And if not, they can do what I do when I'm feeling down about myself: Don't rush out of it until you're ready, and know that tomorrow will be better.

That, and remember that it's usually connected directly to your menstrual cycle. No one can escape that.