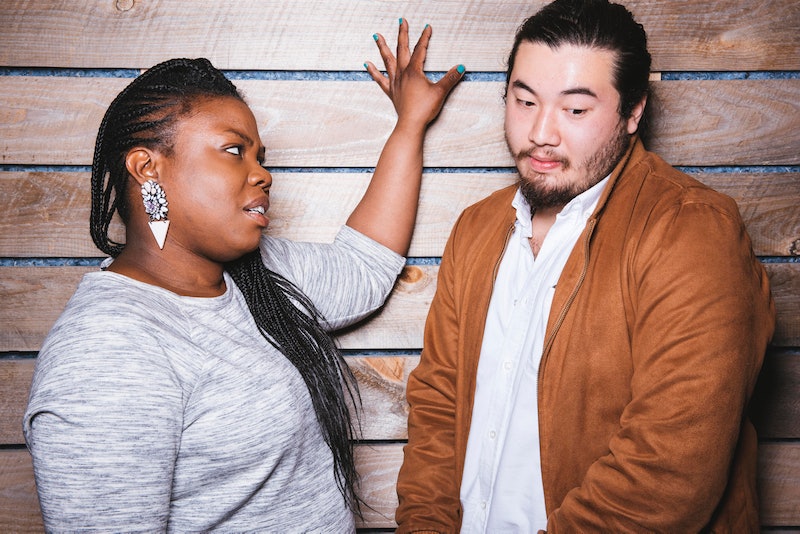 Though it's incredibly common to hear that communication in a relationship is incredibly important — maybe even the most important thing — there's always an exception to the rule. While ignoring your partner would normally be a sign of a relationship on the rocks, new research published by the American Psychological Association has found that, in some cases, ignoring your partner can be a good thing.

The study looked at nearly 1,000 couples over the course of two experiments. The couples were visited by researchers who opened up a conversation about disagreements in their relationship and things that they would want to change, while the researchers recorded the couple's dynamic. The study found that, for some couples, there was what they termed a demand-withdraw pattern. One partner would make demands and the other partner would withdraw or ignore those demands. It sounds like poor relationship behavior — and it is —except for low-income couples. Interestingly, for couples with more resources, withdrawing had a negative impact on a relationship, but for couples who were worse off financially, ignoring the demands didn't have any adverse affect on their relationship or satisfaction levels.

But Jaclyn M. Ross, MA, of the University of California, Los Angeles, and lead author of the study, tells Bustle that "ignoring" may be a bit of a strong word, as the actual findings are far more nuanced than that. "We were surprised that this classic ‘she demands, he withdraws’ pattern of communication operated so differently for couples at different points along the socioeconomic spectrum," Ross says. The idea of a 'she demands, he withdrawals' pattern being a "classic" one is worrying, but it's interesting to see that withdrawal isn't always a bad thing.

"A long tradition of work had indicated that this demand/withdraw pattern of communication should foreshadow relationship distress, and here we were finding this not to be the case for all couples in our sample. While our middle-class couples' relationships did suffer as a result of this demand/withdraw pattern, our low-income, socially disadvantaged couples were actually better off when husbands withdrew while their wives demanded."

Although the study focused mostly on married and heterosexual couples and the research should be expanded, these findings show the importance of understanding how your financial situation can affect your relationship. In some cases, what's beneficial — or even realistic — for one couple might not be for another, especially if they have vastly different life circumstances.

"Considering socioeconomic status is vital to understanding the quality and functioning of people's relationships," Ross says. "We know that low-income couples are especially vulnerable to distress and dissolution, and progress in understanding how this happens will likely require active efforts to recruit under-resourced couples as well as careful analysis of their life circumstances and stressors when forming our research questions and hypotheses." It's definitely something to keep in mind both on a personal level, when it comes to your relationship, and on a larger scale, as more research should be done into this area.

"Our takeaway message from these results is this: for socially disadvantaged couples, problems are more entrenched, or more dependent on outside circumstances, so change may not be possible, Ross says. "What if the partner being asked to change just does not have access to and control over all the resources needed to make that change? In this case, disengaging may be necessary."

Although in most cases, ignoring your partner or problems in a relationship isn't recommended, not every couple's circumstances are the same — and what works for them won't always be the same. In some cases, withdrawing from time to time might actually help secure your relationship satisfaction. This certainly isn't a suggestion to start ignoring your partner, but more of a reminder that not all couples have the same opportunities and coping mechanisms.