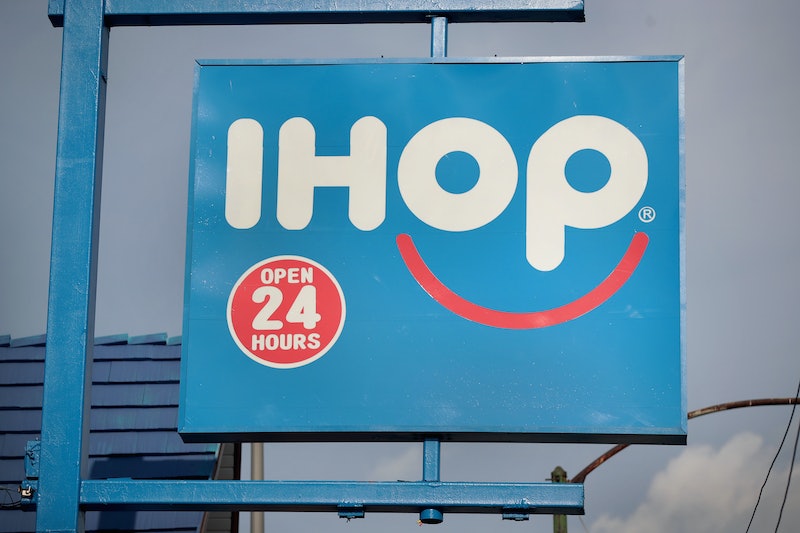 Who among us doesn't have a story that involves all-nighters, finals delirium, and IHOP at 2 a.m.? You can find the 24-hour chain restaurant in every state, but now, you might have to know it by a different name. International House of Pancakes, aka IHOP, is changing its name and reinventing its brand by dropping the 'P' in its name, according to Fortune.

The 60-year-old pancake house announced on Twitter Tuesday that the new name would be 'IHOb' (yes, with a lowercase 'b'). The pancakes are out but it's unclear what the 'b' will stand for.

Many assume the 'b' stands for "breakfast," although IHOP is being coy about it. IHOP (er, IHOb) has teased that the big reveal will come next Monday and even provided a graphics logo showing the 'P' flipping backward to become a 'b' in its name. Twitter users wondered whether the tweet was just another PR stunt for attention, but the New York Post has confirmed that the tweet was serious, not a joke.

“We’re serious about the quality of food and our menu, and this name change really reflects that,” says Stephanie Peterson, IHOP’s executive director of communications, according to USA Today.

Some are hoppin' mad over the name change, and they're showing it on Twitter. One person worried that the name change meant pancakes were going to be taken off the menu, but IHOP quickly responded to the user, saying not to worry and that the famous pancakes would “still ‘b’ here.”

People are intrigued, and IHOP is riding that wave of curiosity. On the same day as the announcement, IHOP sent out a Twitter poll asking what people thought the 'b' could stand for. The answer choices were "biscuits, bacon, butternut squash, and barnacles." Our guess is that it's probably not barnacles. In fact, it's possible the real answer isn't on there at all — that would ruin the big surprise on June 11.

The iconic pancake house was founded in 1958 by Al and Jerry Lapin, with its first restaurant opening in Toluca Lake, California. The small restaurant expanded by franchising over the years and eventually grew into a global empire. According to IHOP's website, as of 2015, IHOP has more than 1,650 locations worldwide, including Dubai (UAE), Guatemala, Kuwait, Mexico, The Philippines, and Saudi Arabia. (At least the 'I' in the name isn't leaving.) IHOP is currently owned by Dine Brands Global.

The change in the name might have something to do with an event that happened in February. Dine Brand Global decided to close 30 to 40 IHOP restaurants while opening 55 to 70 new locations in different high-traffic areas in an attempt to bring up stock prices, according to USA Today. Dine Brand Global laid out a five-year plan, USA Today reported, to shutter underperforming restaurants while working to find and invest in smaller chain restaurants offering healthy food. Part of the problem may just be the change in the way younger generations approach food. Bloomberg reported that sit-down restaurants are currently suffering from slower business and a tougher consumer environment. There are simply too many options out there, and many diners prefer to go to fast and casual restaurants that are less pricey. Millennial distaste for chain restaurants may also add to the punches in their bottom line.

Either way, people hope this 'b' is worth it. For the past few National Pancake Days, IHOP has famously given out free stacks of buttermilk pancakes to both promote the restaurant and raise money for charity. Pancakes are its, you know, bread and butter. So if this upcoming 'b' doesn't have anything to do with pancakes, there just might be some syrup-heavy identity issues ahead.