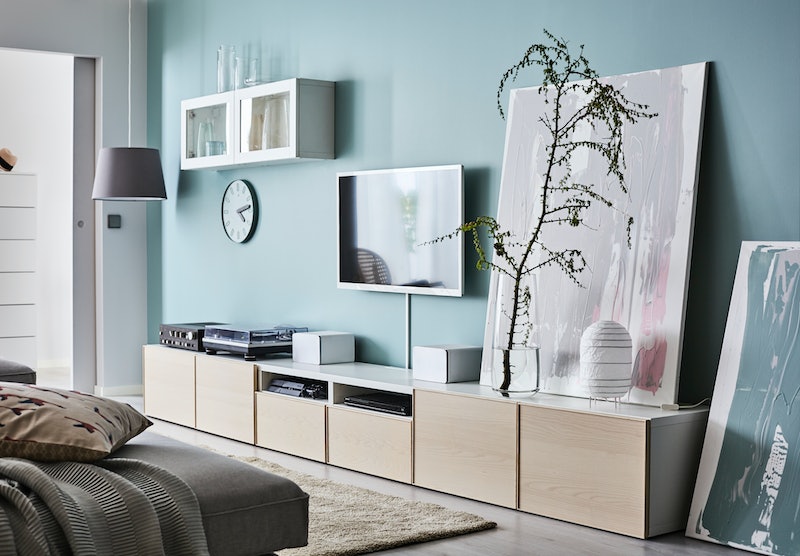 It turns out that the old adage "home is where the heart is" might actually be more than just a cliché. According to IKEA's fifth annual Life at Home Report, a lot of people don't feel at home in their own homes. "In the past two years, there has been a sharp increase in the number of people who say they feel more at home in places other than the space they live in," the study reported. The 2018 results revealed that 35 percent of people feel more at home outside of where they actually reside, and this figure has risen sharply in urban areas.

"The four walls are important but you need to have other opportunities outside the four walls to feel at home," one study participant from Berlin noted. Along these lines, the report revealed that neighborhood and community matter more than size. According to IKEA, 64 percent of people around the world said they'd rather live in a small house in a great location versus a large home in a less than ideal area. This is especially true in large cities where many people spend most of their non-working hours in their neighborhoods, which means living in a community that makes you feel at home is key to mental health, personal happiness, and overall feelings of well-being.

The study revealed that almost 40 percent of Americans currently don't feel a sense of belonging in their homes. And according to Ditta M. Oliker Ph.D. on Psychology Today, feeling like an outsider can lead to loneliness and isolation.

When it comes to having a home that gives you all the warm-and-fuzzy feels, IKEA noted that there are five emotional needs that contribute to the feeling of home: security — feeling safe and grounded; belonging — feeling like you're welcome and accepted in your community; comfort — being content and at ease in your surroundings; privacy — feeling in control of how you disconnect and reflect; and ownership, which isn't necessarily about owning your home but rather having a sense of control over your living space.

"For a large number of people, home just doesn’t feel like home any more. We discovered a new behavior, where people use a network of spaces and places, both within and beyond the four walls, as part of their homemaking experience," Macro Insights Leader at IKEA Group Maria Jonsson said in a press release. "We believe that this expanded notion of life at home gives people more opportunities to create the feeling of home, no matter where or how they live."

In a large sprawling city like Los Angeles where it can take an hour to travel five miles, or in urban areas like New York City where people are less likely to have a car, finding a neighborhood where you feel at home is key to loving where you live. The study found that 44 percent of people who reported feeling relaxed, content, and joyful in their homes see their neighborhoods and communities as an extension of their homes, and 47 percent noted that they seek out their communities for personal-growth opportunities.

This sentiment is particularly strong in the U.S. "Compared to their global counterparts, more Americans consider their community (49.5 percent vs. 43.8 percent), their city/state (38.2 percent vs. 30.7 percent) and their neighborhood (46.4 percent vs. 35.8 percent) as an extension of their home," the study found. Whats more, with the study reporting that one-in-four people work from home in 2018, creating a feeling of community where you live goes a long way toward increasing quality of life.

Additionally, with more and more people living with roommates and extended family, 33 percent of people said they leave their homes to seek privacy and alone time. This means that for many, feelings of home extend beyond their four walls.

"For some people, 'my home begins at my front door.' For other people 'my sense of home begins when I am within this area, around the estate within which I live.' It’s that sense of a wider, more expansive notion of home," Dr. Alison Blunt, co-director of the Centre for Studies of Home, and expert contributor to the Life at Home Report 2018, said in the report.

The advice I always give people who are moving to Los Angeles (which applies to any large city) is to spend a lot of time visiting different neighborhoods before deciding where to live because that community is where you're going to spend most of your time.

"With home activities shifting between locations, it’s clear that our neighborhoods and communities play an increasingly important role in our homemaking experiences. In some instances, they can provide us with more opportunities to create a better life at home than the space we live in," the study explained.

It's a coffee shop that knows your name and your order, a neighborhood that has activities you enjoy readily available, and a community of people you can connect with who accept you for who you are. It's about feeling welcome and wanted. As Anna from Berlin said in the report, "Home is arriving to a place where people take me as I am, where I can be myself and have freedom." Basically, home actually is where the heart is.

More like this
An Honest Review Of The TikTok-Famous WalkingPad
By Kaitlyn Wylde
How To Protect Your Digital Privacy If You Need An Abortion Post Roe v. Wade
By Kaitlyn Wylde
25 Quotes About Love To Share During Pride Month 2022
By Madeleine Aggeler and Emma Garza
4 Most Outspoken Zodiac Signs
By Kristine Fellizar
Get Even More From Bustle — Sign Up For The Newsletter