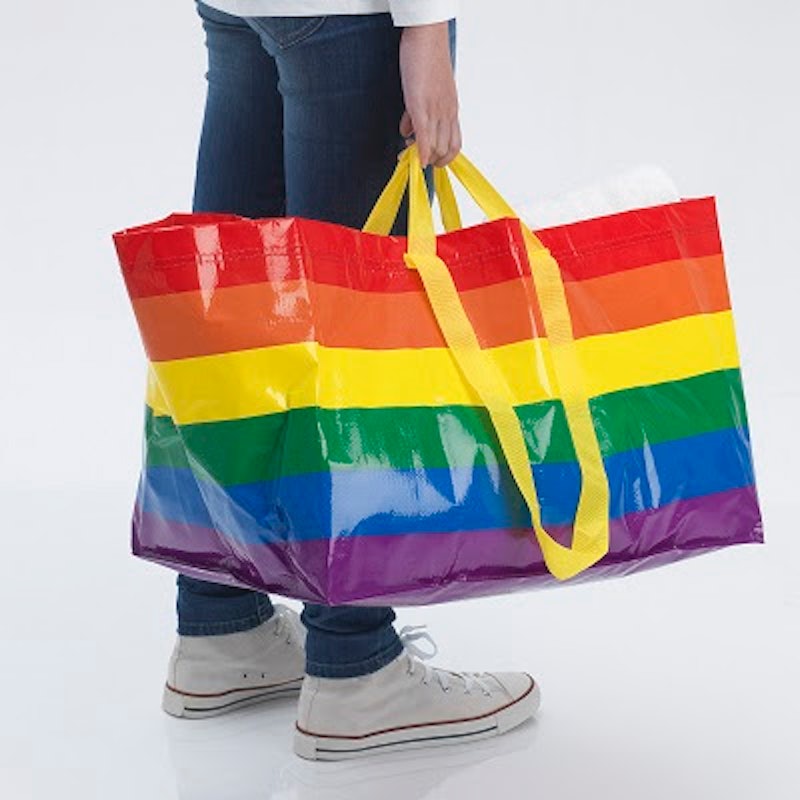 This year’s Pride Month marks the 50th anniversary of the Stonewall Riots, along with the usual month-long global celebration of LGBTQ communities. New York City’s annual Pride March, which is among the largest in the world, will be hosted on Sunday, June 30, but that doesn’t mean you have to wait until then to celebrate. Joining in on the celebration, U.S. IKEA stores will sell rainbow versions of their classic tote bag beginning June 1. Come for the Swedish meatballs and lingonberry sauce, stay for the limited edition tote.

The Scandinavian furniture chain is partnering with the Human Rights Campaign Foundation (HRCF) for the limited edition product, dubbed the KVANTING Shopping Bag. All proceeds from the bag’s sales, which will retail in stores for $3.99, support HRCF’s programs that benefit LGBTQ youth, children, and families. IKEA stores across the States will also be raising the Pride Rainbow flag on June 1 2019, according to a press release about the launch sent to Bustle.

“As we prepare to mark Pride month, we are thrilled to join IKEA U.S. in this powerful partnership that will help drive some of our most important work — improving equity and inclusion for LGBTQ youth, in schools and sports, in child welfare organizations and beyond,” said Ellen Kahn, director of the HRC Foundation’s Children, Youth & Families Program, in a statement. “It has never been more important to commit to doing more to protect, affirm and uplift LGBTQ youth, who are at increased risk of bullying, homelessness and violence compared to their non-LGBTQ peers."

The collaboration adds to IKEA's history of supporting LGBTQ equality and visibility. In 1994, the company aired a landmark national TV advertisement featuring a gay couple — a rarity at the time. Last year for Pride Month, IKEA Canada released a video featuring drag queens repurposing IKEA products into outfits and accessories. The press release about the KVANTING launch also notes that IKEA was on Forbes' 2019 “Best Employers for Diversity” list, where it ranked 95 out of 500 companies. IKEA also earned 100% on HRCF’s Annual Scorecard on LGBTQ Workplace Equality for the fourth year in a row this year, the press release states.

Aside from donning rainbow-themed everything, you can help support Pride Month in many other meaningful ways. Whether you identify as LGBTQ or as an ally, you can look up events near your city to help support the cause, as well as donate and volunteer with organizations like The Trevor Project that provide crucial crisis intervention and suicide prevention services to LGBTQ youth. Seeking out local LGBTQ-owned or LGBTQ-friendly businesses, like cafes and bookstores, on top of your regular spots is another great way to show your support.

And while offering solidarity during the month of June is wonderful, the fight for LGBTQ visibility and equality doesn't end when the parades do. Continuing with these support efforts throughout the year in any capacity will help continue to celebrate LGBTQ people and create a world where people feel free to be their authentic selves.

More like this
10 Times Boris Johnson Got It Wrong On Trans Rights
By El Hunt and Sam Ramsden
The UK's First LGBTQ+ Museum Is Finally Opening
By Sam Ramsden
Target Dropped *Two* New Fashion Collabs With Queer-Owned Brands
By Dominique Norman
5 Crystals For Luck, According To Experts
By Megan McCarty
Get Even More From Bustle — Sign Up For The Newsletter