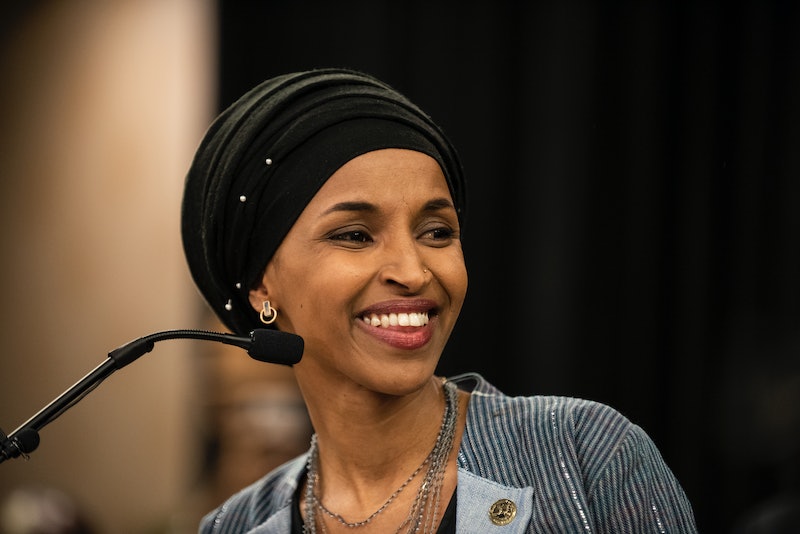 The new representative for Minnesota's Fifth Congressional District wants to significantly raise taxes on the wealthy. Declaring that "the 1 percent must pay their fair share," Rep. Ilhan Omar discussed her tax plan for the rich on activist Zainab Salbi's show "Through Her Eyes" on Tuesday. Omar noted that the U.S. marginal tax rate was once around 90 percent and indicated she supports Rep. Alexandria Ocasio-Cortez's suggested 70 percent rate for those making over $10 million.

"We could increase the taxes that people are paying who are the extremely wealthy in our communities," Omar told Salbi on Tuesday. "70 percent, 80 percent, we've had it as high as 90 percent."

But Omar doesn't prefer a 90 percent rate to the 70 percent rate that Ocasio-Cortez has proposed. When Bustle reached out to Omar's office for more information on her views after the "Through Her Eyes" interview, her spokesperson pointed to a Tuesday tweet. "I'm with @AOC," Omar clarified on Twitter after the interview aired. "If you're earning more than $10 million, those earnings should be taxed at 70%."

Omar has seemed to indicate in the past that she would support an even higher rate than 70 percent, though. When The Hill asked about her ideal top tax rate earlier this month, she declined to give a specific number but said legislators should be "as bold as we can." She again noted that U.S. rates used to be as high as 90 percent.

And she's absolutely right about that. According to a Vox analysis of the United States' historical marginal tax rates, President Franklin D. Roosevelt hiked the top rate to 94 percent for those making over $2.6 million in 1943. He argued that the change was necessary to raise money for the war effort. President Dwight D. Eisenhower lowered the top rate to 77 percent in 1964, and it stayed in the 70s for almost two decades before dropping to 38.5 percent in 1987. It's been close to that ever since; the current highest marginal rate is 37 percent and applies to earnings over $500,000.

Ocasio-Cortez first floated the idea of a new marginal rate as high as 70 percent during an interview with 60 Minutes earlier this month. When interviewer Anderson Cooper responded by labeling her agenda "radical," she said, "I think that it only has ever been radicals that have changed this country. ... if that's what radical means, call me a radical." Since then, a Hill-HarrisX poll suggested that 59 percent of the country supports her proposal.

Omar believes that the progressive agenda of people like herself and Ocasio-Cortez can be funded not just by tax increases on the wealthy, but also by cutting back spending in areas like defense. In Tuesday's interview, the representative spoke to Salbi about how the U.S. defense budget "has increased nearly 50 percent since 9/11." She criticized the fact that "most of the money that we have in there is much more than with we spend on education, on healthcare."

It remains to be seen whether the 70 percent rate supported by Omar and Ocasio-Cortez will gain traction with less progressive Democrats in Congress. But it will likely be an issue that's debated during the 2020 primary season.