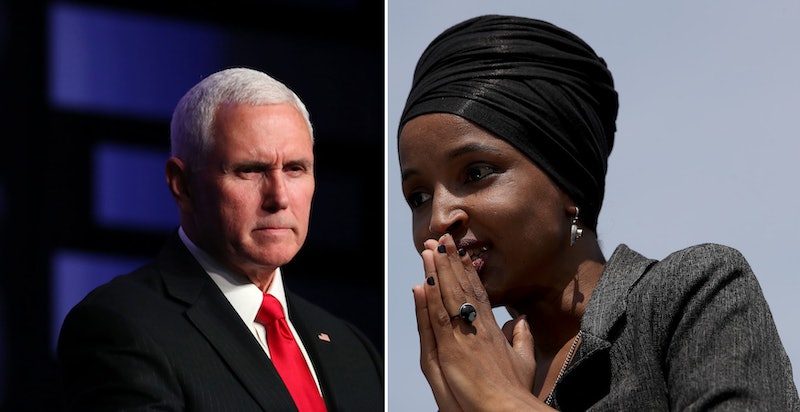 After criticizing the United State's involvement in Venezuela, Rep. Ilhan Omar is pushing back on Vice President Mike Pence's claim she "doesn't know what she's talking about" when it comes to Venezuela. While the two clearly disagree on what contributed to the conflict in Venezuela, the Democratic congresswoman has now accused the vice president of attempting to make her "feel small."

"Women of color have heard this before," Omar wrote on Twitter. "Instead of 'we disagree,' it's 'she doesn't know what she's talking about.'" The Minnesota representative argued that such retorts were an attempt to make women of color "feel small."

"This from an Administration that thinks climate change is a Chinese hoax," she added, in an apparent jab at President Donald Trump's past comments.

On Thursday, Pence took to Twitter to criticize Omar for having said that a lot of the policies the United States had put in place had "helped lead the devastation in Venezuela." Pence accused the congresswoman of supporting socialism rather than freedom. "As Venezuelans take to the streets to stand for their freedom against an oppressive dictator, Democrat Congresswoman @IlhanMN chooses socialism over freedom," he wrote. "The Trump Administration stands with the freedom-loving people of Venezuela."

In a tweet posted Thursday, Omar appeared to challenge Pence's criticism, although she refrained from mentioning him by name. "Just as in interventions past, those who oppose war are labeled supporters of dictators and haters of 'freedom,'" she tweeted. "We saw this playbook in Iraq. The situation in Venezuela is dire and the Trump Admin is making it worse. We must support diplomacy, not war."

On Friday, in an interview with Fox News, Pence said he'd decided to speak out against Omar "because the congresswoman doesn't know what she's talking about."

"Nicolás Maduro is a socialist dictator who has taken what was once one of the most prosperous nations in this hemisphere and brought it literally to a level of deprivation and oppression and poverty that we have never seen," the news outlet reported Pence went on to say, referencing Venezuela's leader. "That's not a result of U.S. policies."

Omar appeared to double down on her rebuke of the vice president in a second tweet posted Saturday. "Speaking of 'ignorance,' maybe the @VP and @SecPompeo should spend less time worrying about mine and more time getting the Trump his briefing before he gets on the phone with Putin, or the media, or anyone," the Minnesota representative wrote in a tweet featuring a USA Today report alleging Trump had contradicted Secretary of State Mike Pompeo's claim that Russia was meddling in Venezuela. "This is embarrassing."

In April, the Trump administration voiced support for an apparent rebellion being led by National Assembly leader Juan Guaidó, whom the administration recognized as Venezuela's interim president in January after allegations regarding the legitimacy of Maduro's 2018 election cropped up. "Today interim President Juan Guaido announced start of Operación Libertad," Pompeo tweeted in late April. "The U.S. Government fully supports the Venezuelan people in their quest for freedom and democracy. Democracy cannot be defeated."