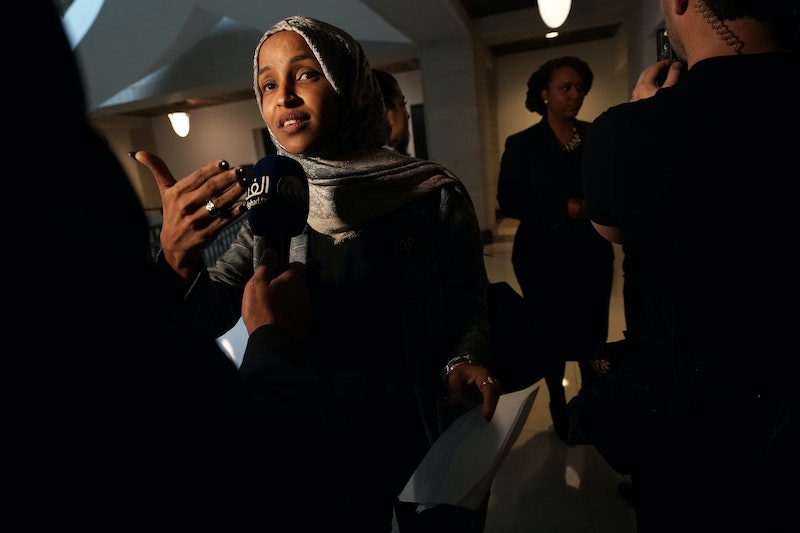 Freshman Minnesota Rep. Ilhan Omar has achieved a lot in her first 36 years on this planet, including becoming one of the first two Muslim women and the first Somali American elected to Congress. On Thursday, she proved that she didn't do it by letting her critics get in the way. Ilhan Omar responded to a Republican congressman's tweet that called her committee appointment "crazy" with a no-nonsense comment that showed exactly what she's prepared to deal with.

Omar didn't respond directly to Zeldin. Instead, she retweeted a tweet from author and human rights lawyer Arsalan Iftikhar, who posted an image of Zeldin's tweet along with the caption, "The Islamophobic dog whistles continue from the Republican Party."

"Don’t mind him, he is just waking up to the reality of having Muslim women as colleagues who know how to stand up to bullies!" Omar tweeted on Wednesday evening. "It’s gonna be fun watching him lose his marbles."

Zeldin then responded to Omar with a heated message.

"Those poor innocent ISIS fighters & Palestinian terrorists right? Give me a break! That’s a problem no matter your religion or gender Ilhan," he tweeted on Thursday. "Your anti-Semitic & anti-Israel hate is strong & wrong & those terrorists have US blood on their hands as well."

Omar didn't respond to that tweet, but she did tag Zeldin when she posted a Raw Story article that said Omar had, indeed, correctly predicted that Zeldin would "lose his marbles."

"Thank you, next," Omar tweeted, along with an emoji.

Omar has received criticism over a 2012 tweet of hers that employed an anti-Semitic trope, which she apologized for after the tweet came up in a CNN interview and an opinion piece in The New York Times.

"That statement came in the context of the Gaza War," Omar wrote, responding to the claims of anti-Semitism. "It’s now apparent to me that I spent lots of energy putting my 2012 tweet in context and little energy is disavowing the anti-semitic trope I unknowingly used, which is unfortunate and offensive."

She added, "With that said, it is important to distinguish between criticizing a military action by a government and attacking a particular people of faith."

Despite this exchange, Omar and Zeldin will have to learn to work together, as there are only ten people on the Oversight and Investigations subcommittee of the Committee on Foreign Affairs — and Omar also happens to be the only woman. Committee assignments are important for freshman congresspeople, because they can end up defining the representatives' areas of specialization, as Roll Call explained. Omar has already expressed strong views in certain foreign policy areas — including her criticism of Israeli policy — and this appointment will give her a chance to grow as a lawmaker in the area of foreign policy even more.