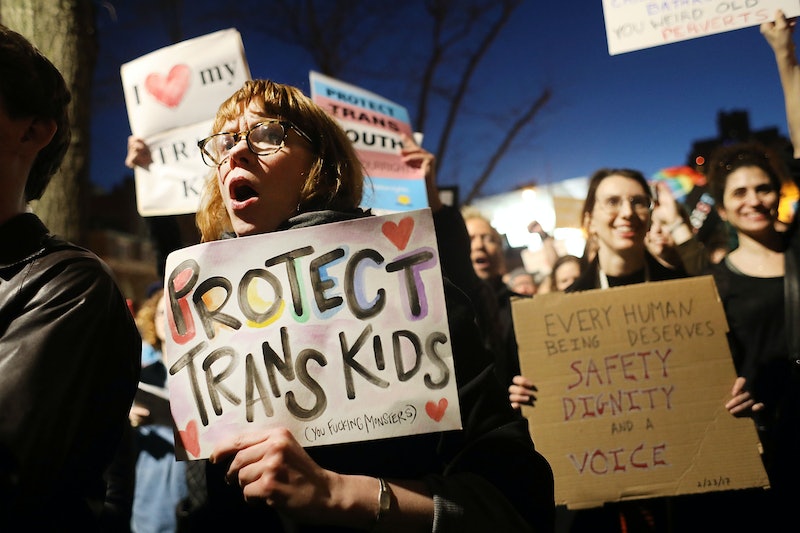 Sunday was a big day for the LGBTQ community in Illinois, and not just because it was the day of Chicago's Pride Parade. On Saturday, Illinois Gov. J.B. Pritzker protected trans students with an executive order aimed at making schools safer and more welcoming places for them — an important step for a particularly marginalized population.

"I just signed an executive order to disrupt the patterns of discrimination in our classrooms and ensure our school[s] across the state are affirming and inclusive for transgender, nonbinary and gender nonconforming students," Pritzker announced on Twitter on Sunday. "While the LGBTQ community has so much to celebrate, we also must recognize that the trans community that ignited this movement has been left out of many of its victories."

The executive order supports trans students by establishing the Affirming and Inclusive Schools Task Force, as ABC 7 reported. The task force will investigate schools across the state and the nation to develop a set of recommendations on how to make schools more supportive for gender nonconforming students. It will then pass these best practices on to the governor and the Illinois State Board of Education at the end of the year, according to ABC 7.

This is particularly important for trans students, who are far more at risk of becoming the victims of hate crimes and violence than the rest of the LGBTQ community.

"Visibility and acceptance for non-cisgender people are on the rise, but so are attacks of hate, particularly against black trans women," Pritzker continued on Twitter. "We're taking one more step toward securing Illinois’ place as a leader in equality and hope. Under this executive order, ignorance is no longer an excuse for bigotry."

Specifically, the task force will look at ways that schools can improve policies regarding dress codes, pronouns and names, and record keeping to make all procedures work not only for cis students, but also for trans students, according to CNN. This could help change the situation for trans students in Illinois as it stands right now, with 80% of trans students reporting in a 2017 Gay, Lesbian & Straight Education Network survey that they felt unsafe while at school, according to the Chicago Sun-Times. The same survey found that 70% of trans, nonbinary, and gender nonconforming students found their schools' policies to be discriminatory.

“Under this executive order, ignorance is no longer an excuse of bigotry,” Pritzker said at the order's signing ceremony, which took place at Lake View High School, per the Sun-Times.

"Ending the intolerable levels of discrimination and violence against our transgender community starts here — in our schools — by making the values of tolerance and respect just as much a part of our educational cultural as academics, athletics, and the arts," she wrote in a statement, according to CNN.

This, of course, is only one state, and it's only a start in terms of truly protecting trans people throughout their lives. Especially with the protections that the Trump administration has rescinded, there's a long way to go — but that doesn't mean that this moment should go unnoticed.

More like this
Gen Z Are Twice As Likely To Identify As Queer, According To New Data
By Sam Ramsden
Adam Lambert Called Out The George Michael Biopic Over Potential Casting
By Sam Ramsden
"Lavender Haze" Star Laith Ashley Breaks Down Filming With Taylor Swift
By Jake Viswanath
Ozzie’s Coming Out Scene With Kitty On 'That ’90s Show' Has Twitter Sobbing
By Brad Witter
Get Even More From Bustle — Sign Up For The Newsletter
From hair trends to relationship advice, our daily newsletter has everything you need to sound like a person who’s on TikTok, even if you aren’t.