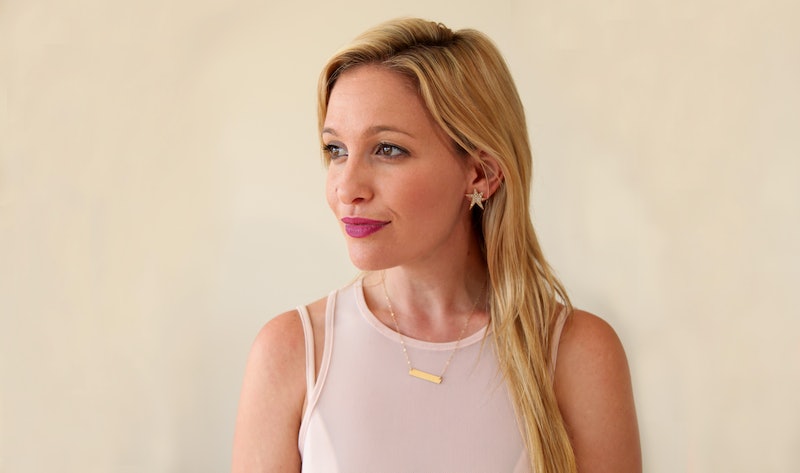 Jen Glantz is the world’s first professional bridesmaid and founder of Bridesmaid for Hire. Her new book, Always a Bridesmaid (For Hire) will be available on Feb. 7. The below is an excerpt from that book.

Rose asks if she can call me Jessica. Her wedding is three months away, and we are smack in the middle of our first phone session together. I have no idea if she pulled the name from a book of the most popular girl names of the ‘80s, or if the name has significance to her. All I know is that from now on, I’m Jessica.

Here’s how it usually works with a client. First, I’ll get to know the bride — her pet peeves, her wedding conundrums, and her big-day fears. Then the bride will get to know me and learn about my experience as a bridesmaid for hire. I’ll give her some pre-aisle precautions, and we’ll discuss what I should say during the champagne toast at the reception, before the cake is cut and the bouquet is tossed. And then, together, we’ll get to know “Jessica.”

Jessica is the one with the story, the girl who has been places before. The protagonist who enters the wedding from stage left and recites how she knows the bride and how happy she is to be able to stand by her side after all these years. Jessica is the bridesmaid who shows up on the wedding day in my five feet seven inches lanky-armed body.

Jessica is the one with the story... The protagonist who enters the wedding from stage left and recites how she knows the bride and how happy she is...

Sometimes Jessica is Christiania or Meghan with an H. It is always entirely up to the bride. Sometimes I can have as many as three different names and three different stories in one weekend as a bridesmaid for hire.

After a while, it didn’t matter what people called me anymore; I was subliminally trained to answer to everything. Whether I was out in a restaurant with terrible acoustics, sitting in the middle row of a movie theater, or taking a quiet walk around the Central Park reservoir on a Sunday afternoon, whenever I heard someone call out a name, any name, a nervous twitch inside me would ignite an immediate answer. Without flinching, I would turn around and wave, say hello, and smile to a complete and total stranger, who was probably just saying hi to her dinner date, chick-flick companion, or a friend she bumped into while also taking a brisk stroll on a casual Sunday afternoon. But just in case she was talking to me, because she recognized me from a rehearsal dinner, the linoleum dance floor, or even perhaps a wedding toast that I gave for a bride I had just met only months ago, I acknowledged her. I transformed, for a couple of seconds, back into that person she might have known for a few minutes, a few hours, or a few days.

Without flinching, I would turn around and wave, say hello, and smile to a complete and total stranger.

“So where did Rose and Jessica meet?” I ask, trying to give birth to our “How do you two know each other?” story — the first, and sometimes only, question people ask at a wedding.

Rose doesn’t want anyone, including her five other bridesmaids and her fiancé, to know that she hired me. She made me virtually pinky-promise that before she pressed Send on her signed contract and deposited her payment into my account, this would be our forever secret. She wanted me there as a bridesmaid on her wedding day because she was having panic attacks over how her other bridesmaids were going to ruin what she hoped would be the best day of her life. They were already doing a pretty good job of trying, with their overbearing opinions and their disdain for following directions. She was exerting too much energy keeping tabs on them and making sure they didn’t lash out at each other — or her — and ruin everything. She was hiring me as their babysitter, as the peacekeeper, making sure that if they had any diva moments — and she promised me they would — that I would intercept them like a 125-pound linebacker.

She wanted me there as a bridesmaid on her wedding day because she was having panic attacks over how her other bridesmaids were going to ruin what she hoped would be the best day of her life. They were already doing a pretty good job of trying...

I had a track record of falling in love with every person that I met on the job, so I agreed, signed a contract with her, and imagined that this would be pretty easy. I would distract them with candy, jokes, and a night of electric slide–like dance moves.

“It doesn’t really matter,” she went on, nonchalant and blasé. “Because my bridesmaids already hate you and probably won’t speak to you.”

More like this
The BBC Is Adapting A Best-Selling Novel About A Mistaken Killer
By Darshita Goyal
What Joyce Carol Oates Knows About Fame
By Erin Somers
10 Must-Read New Books Out This Week
By K.W. Colyard
Nicola Coughlan Shared A Lady Whistledown Excerpt From ‘Bridgerton’ Season 3
By Grace Wehniainen, Alyssa Lapid and Sam Ramsden
Get Even More From Bustle — Sign Up For The Newsletter