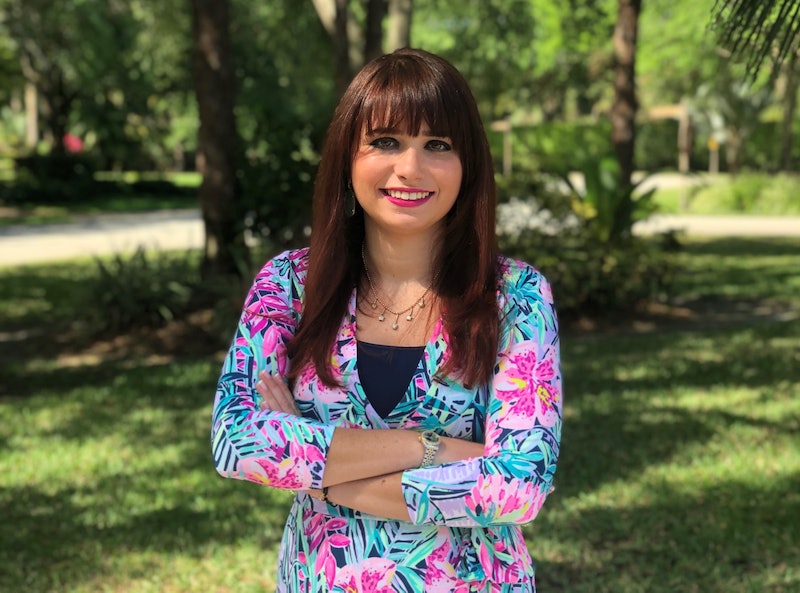 Everybody is a collection of identities. I am a woman, a daughter, a friend, and I am autistic. Most recently, I have added “lawyer” to my collection of identities. Although I graduated law school less than a year ago, my identity and privilege as a female attorney with a disability allows me to use my voice to open dialogue between businesses, people with disabilities, and professionals.

Autism is a developmental disability affecting one in 59 children today. Autism is also a spectrum, so every autistic person is unique and has varying support needs. Those with fewer support needs may not disclose an autism diagnosis for a variety of reasons, such as negative stigma, discrimination, or a lack of support from family members, friends, or colleagues. I am openly autistic; meaning, I do not conceal my autism, and automatically disclose because I celebrate it as part of my identity. I only know of a handful of openly autistic lawyers, most working within the arena of disability rights.

However, according to a report from the National Association of Law Placement, only 0.53% of attorneys self-reported as having a disability. Autistic adults generally have the lowest overall employment rate among all disabled people. As an employed autistic lawyer, I feel responsible to help these statistics change. I am not the voice of all autistic people, but I strive to amplify our community’s voices, concerns, and triumphs. After a video about me becoming an openly autistic attorney in Florida went viral, I am speaking out about the importance of neurodiversity and further inclusion within the workplace. It is a personal and professional mission to ensure disability and neurodiversity are fearlessly self-reported and included amongst lawyers and law firms — because all types of brains and abilities benefit everyone involved in the legal system.

I am also a woman. Autism is less commonly diagnosed in girls and women compared to boys and men; there is one autistic girl for every four autistic boys. Autistic women are underrepresented everywhere, including in the field of law. However, the legal profession is making improvements in employing and retaining women. Women began to outnumber men enrolling in law school in 2016 and are being employed as lawyers in record numbers, according to data from Enjuris and the National Association of Law Placement.

Yet bias against women in law is certainly present in my home state of Florida and nationwide. A Florida Young Lawyers Division 2015 survey revealed that 43% of female lawyers under age 36 experienced gender biases from employers, courts, or opposing counsel. Bias could be as simple as being called “honey” in a professional setting, or being mistaken for a paralegal or an intern. It can also be as serious as sexual harassment. The American Bar Association reported rampant gender and racial bias in the profession in 2018, signaling the issue is not getting better.

These existing surveys of women lawyers fail to address any bias towards women lawyers with disabilities. I entered law school in 2015, and by my second year of law school, women were the majority of entering law students. Still, I was recently mistaken for an eager first-year law student at a networking event, though my name tag indicated I was a lawyer. I also will face skepticism because I am autistic. When I was first diagnosed with autism, my parents were told I would be lucky to hold a minimum wage job. Nearly 22 years later, this prediction is unfortunately grounded in reality for women with disabilities.

In 2017, only 34.6% of American women with disabilities were employed, according to a report from Respectability. In contrast, 82.5% of nondisabled American women are employed. People will question my competence solely because I am autistic, despite the fact that I graduated from college, law school, and passed the same bar exam administered to my nondisabled peers. I cannot help but wonder how I will continue to be perceived throughout my career as a female autistic lawyer.

I want people to stop using statistics as measuring sticks for what people with disabilities cannot achieve.

I am at the beginning of my career. I do not want to become a statistic about experiencing setbacks because I am an autistic woman. I believe being an autistic woman is extremely powerful. I exist in spaces where society traditionally would not welcome me. I am a person with a disability, when society sees us as less or deserving of pity, rather than capable or talented. I constantly have to battle society’s low expectations of disabled people. But I am not simply beating statistics; I want people to stop using statistics as measuring sticks for what people with disabilities cannot achieve. My being visible in this field challenges many stereotypes about the intersection of autism, women, and career choices; after all, I am not the autistic man in the sciences we so often envision (think: The Good Doctor).

The issues surrounding women with disabilities in professional work environments beg two important questions: how do we accept and celebrate autistic professionals, and how do we support working women? Perhaps my question is a mixture: how do we best support and encourage society to employ autistic and disabled women? To make positive change, autistic and disabled women are integral to the inclusion revolution, and I am excited to help lead the charge.

More like this
Beyoncé & Madonna’s “Break My Soul” Remix Honors A Group Of Black Icons
By Stephanie Topacio Long
Charlene White & MPs Lead Tributes For Bristol Bus Boycott Organiser Roy Hackett
By Sam Ramsden
Here’s Your Daily Horoscope For August 8, 2022
By Mecca Woods
The Best Time To Date After A Breakup, According To Experts
By Bustle Editors
Get Even More From Bustle — Sign Up For The Newsletter