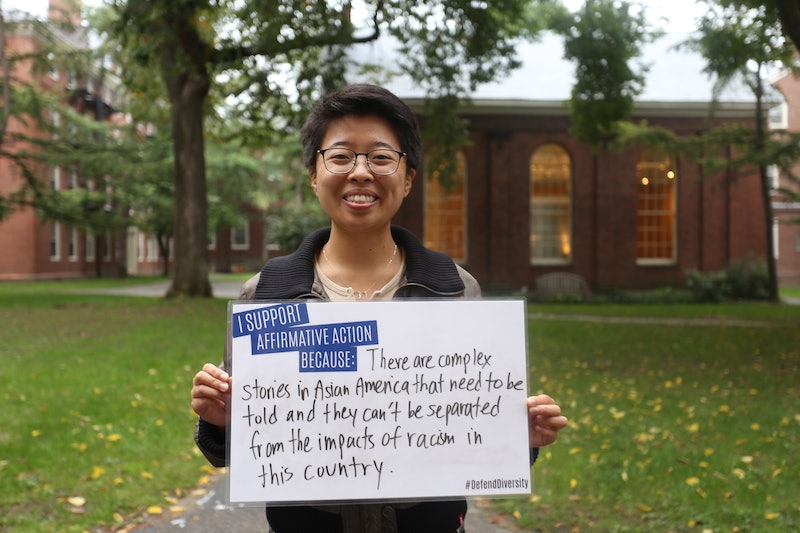 In this op-ed, Sally Chen, a Harvard senior and student representative in the Harvard affirmative action case, explains why she supports a race-conscious admissions policy.

Asian Americans are being used as a cover by a conservative crusader who is suing Harvard claiming that “racial balancing” at the school benefits black and Latino students and discriminates against Asian Americans. Students for Fair Admissions’ goal is to to erase the salience of race when students apply to highly selective schools, and the founder’s lawsuit exploits the “model minority” myth to suggest that Asian Americans’ work ethic easily vaults us over the barriers of racism and therefore, we do not need affirmative action — a statement that is as harmful as it is untrue.

My parents were factory and warehouse workers in China before arriving in San Francisco in the 1980s. Our family of six lived in a one-bedroom apartment in between urban professionals and underserved communities; our local elementary school sat a few blocks from rundown liquor stores and strip clubs. My dad has worked at a Chinese restaurant for the past 30-plus years, and my mom worked briefly from home and at a bakery in San Francisco’s Chinatown, while also handling the full-time job of caring for me and my three sisters.

In the outpouring of advice I received when I was applying to college, nothing was more damning than being told that the narrative of my personal statement was a cliché and would add nothing to my application. If I wrote about being the child of Asian immigrants, I risked telling a story that was overdone.

The current lawsuit against Harvard similarly seeks to erase the salience of race in our lives. It's a direct affront to someone like me, a Harvard student and direct beneficiary of its race-conscious admissions program.

Against everyone’s advice, I ultimately chose to write about growing up in a working-class Asian-American family in my college essay, because it contextualized the most honest and authentic version of myself. It also helped me break through the model minority myth, a stereotype that Asian Americans are professionally successful, politically complacent, and identically boring. My experiences and perspective explained my interest in pursuing a career in the hard sciences with thoughtfulness and compassion for low-income communities of color.

On my application, interviewers wrote that they saw my “potential to be strong in the humanities or the sciences.” They recognized that while my test scores were not stellar, I had the potential to make a “contribution to college life” that would be “truly unusual.” Harvard's holistic race-conscious admissions allowed me to present myself as a whole person — beyond stereotypes — in a way that flat numbers could not.

In exploiting the “model minority” myth, Edward Blum, the founder of the group that is targeting Harvard, belittles the hardships that generations of Asian Americans faced. To survive and thrive despite years of discrimination, exclusion, and persecution is a testament to sacrifice. Initiatives like affirmative action opened the doors for early Asian-American pioneers in many fields, and Blum’s campaign for its dissolution would directly harm the many Asian Americans who still struggle in this country, barring them from educational opportunities that are vital to social mobility.

There are complex and diverse stories within Asian America that need to be told, and they cannot be separated from the impacts of racism in this country. This was the perspective I drew from when I wrote the essay in my Harvard application. In the end, my personal experience and identity were seen as strong assets rather than liabilities in my application.

Without the racial diversity that affirmative action can provide and that Blum seeks to eliminate, we would lose the crucial parts of education that happen when you learn with and from other people. It would only further blind Americans to the qualities and perspectives that we can bring to the table.