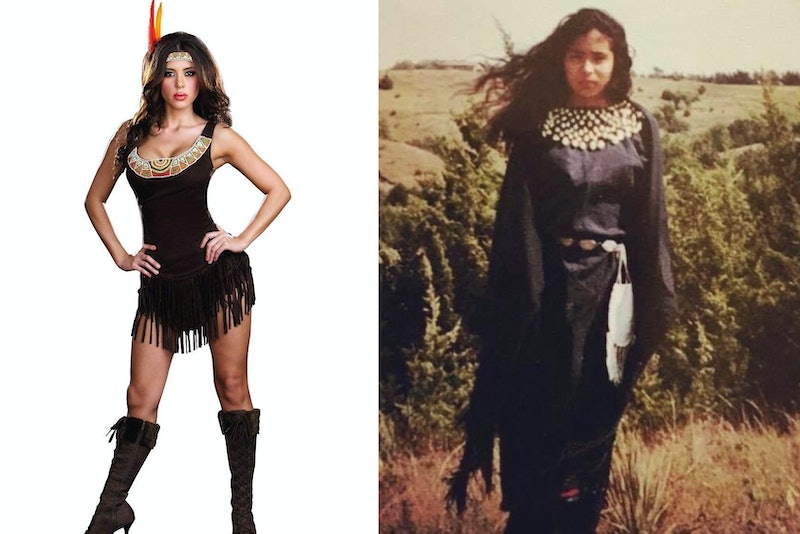 In this op-ed, Jordan Marie Daniel, Kul Wicasa Lakota, co-director of Seeding Sovereignty’s political engagement program Rising ReSisters, discusses the ramifications of appropriating Native identities for a Halloween costume, with particular emphasis on hyper-sexualizing Indigenous women. In her work with Seeding Sovereignty, Daniel hosts the webinar series Indigi-Chats and brings awareness to the crisis of Missing and Murdered Indigenous Women. To learn more about her work, please visit www.seedingsovereignty.org.

Halloween is coming, and so are the costumes. Like in our dreams, Halloween is the one time a year people can act out their true desires unchallenged by convention, ethics, or morality. When called on any offense, the response is typically, “It is just a costume — why are you so offended?” My next question is, “Is it really just a costume?” In many ways, the Halloween costume you wear says a lot. It can also say a lot about what you think of me.

I am Kul Wicasa Lakota. I am Native American. My costume for 365 days of the year, which I did not choose, and can’t take off, nor do I want to be anything else but Native, is somewhere between an invisible woman and a Rorschach ink-blot — I'm either not seen at all, or my identity is projected onto me by those who do not and cannot know me. On one hand, the voices of Native Americans are ignored by most people in our society. Despite the structural challenges we face daily to succeed in a nation often hostile to our very existence, these challenges are ignored by the dominant culture. On the other hand, when I am recognized as Native, people read into every stereotype possible. From feathers, to alcoholism, to getting things for free, to possessing “secret wisdom,” I’ve heard it all. When you decide to use a bastardization of my culture as your Halloween costume, it tells everyone what you think of people like me. It encourages others to view us a caricature, as less than, as objects.

Reducing a race of people who experience marginalization and oppression daily to a feathered head-dress or a little princess is more than disrespectful. It is harmful. It is the endorsement of propagation of disenfranchisement and violence.

If you’re thinking of being “Sexy Pocahontas” or a “Pocahottie” for Halloween, ask yourself this: Would you be comfortable dressing up as another marginalized group that’s survived genocide and systemic oppression? Did you know that, in the real story, Pocahontas was around 11 years old when John Smith — a man then in his late 20s — decided to make her his? And did you know that when you dress like a “PocaHottie,” you hypersexualize a young girl who was repeatedly violated by a man almost 20 years older than she was?

Further, did you know that today, each year, untold numbers of Native women are assaulted, murdered, and disappeared at the hands of men who view our women as nothing but sexual flotsam? Did you know that, in many parts of the country, a non-Native who assaults women and children on a reservation cannot be prosecuted once they’re off the reservation? It wasn’t until the Violence Against Women Act of 2013 that Tribes could exercise their sovereignty to prosecute abusers in courts — and that act could expire soon.

When you decide to use a bastardization of my culture as your Halloween costume, it tells everyone what you think of people like me.

According to Indian Law Resource Center, four out of five American Indian and Alaska Native women have experienced violence (and are 10 times more likely than the national average to be murdered). Native American women are 2.5 times more likely to be raped or sexually assaulted in their lifetime than any other group. Further, according to the Department of Justice, in 86 percent of reported cases of rape and sexual assault, American Indian and Alaska Native (AI/AN) women were assaulted by non-Native men.

When you hypersexualize a people who are at highest risk of sexual violence, by wearing these “PocaHottie” or “Indian Chief” costumes (which do not accurately portray real Indigenous regalia), you are contributing to the depersonalization at the core of this issue. And, before you dress like a victim of genocide and systematic oppression, maybe consider who we are. We are a vibrant and dynamic people who, despite being targeted for genocide, and systemically marginalized when those efforts failed, are still here. Despite your costume.

Look at me, 12 years old, in my traditional regalia (not a costume) for my Coming of Age ceremony. Compare mine to the hyper-sexualized and dehumanizing “PocaHottie” costume. We did not and do not dress this way. There are protocols in place, there are ceremonies in place, there are cultural traditions and values in place, to make and earn our regalia. My Coming of Age ceremony was shared with family and my community, as I entered the onto the red road of womanhood.

Know the difference. Educate yourself. We are more than a costume. We are more than the stereotypes. We are a community, suffering from more than 500 years of systematic oppression and attempts to have our cultural identities stripped away from us. We are still here. Indigenous Peoples are beautiful and resilient. Our culture is not your costume.