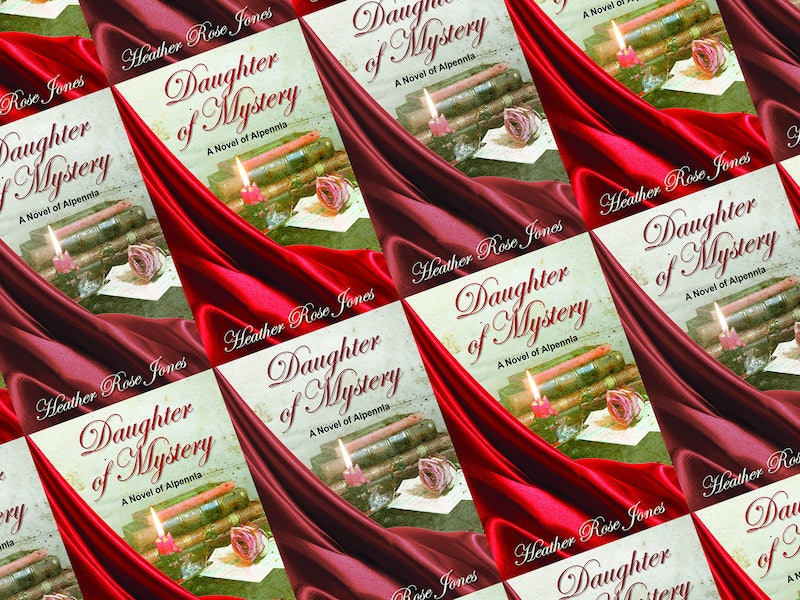 Bustle's I'm So Jealous series is dedicated to the books, TV shows, movies, podcasts, and more that super fans are so jealous someone else gets to experience for the first time. In this installment, Siobhan Ball writes about Heather Rose Jones's The Alpennia Series.

My experience growing up as a queer bookworm was singularly depressing. The first, and only, time I found a book with lesbians in it they were both victims and villains, brainwashed torture victims turned torturers who wore red leather cat suits and whose queerness felt like a part of their damage. Their relationship seemed to exist only to showcase the tolerance of the hero, and by the end of the book one of them was dead. It wasn't until years later that I would find a positive queer relationship in Francesca Lia Block's Witch Baby, and even then it took place between two men. Relationships between women were restricted to fanfiction, and then later still to literary fiction where a bittersweet ending was the most you could hope for.

Things are a lot better now, but still - well written, comforting, escapist wlw (women who love women) fiction is still hard to find. Which is where the Alpennia series by Heather Rose Jones comes in. If you were the sort of teenage girl who just wanted the women in Jane Austen novels to get married to each other, or who gender-swapped the heroes of fantasy novels in your head, then you absolutely need to read this series. It will soothe the sad sapphic teenage heart still inside of you while drawing you in so thoroughly you’ll lose an entire day to it.

The first book, Daughter of Mystery, kicks off with some fairly classic Regency Romance and women-oriented fantasy tropes. Margarit Sovitre, an orphan of middling rank and no money, inherits a huge fortune from her strangely high ranking godfather. It not only makes her the most marriageable girl around but also gives her the freedom to avoid marriage and attend university instead, where she can learn to use the sacred magic she possesses in unprecedented amounts. This is the kind of story I would have eaten up as a teenager, even without the queerness.

Margarit's new life is complicated by the fact that her inheritance comes with an indentured servant, her godfather's bodyguard Barbara. The terms of her godfather’s will state that she must retain ownership of Barbara until they both come of age or her inheritance is forfeit. Margarit has also been prohibited from forfeiting her fortune to free Barbara. And so, the two of them are stuck with each other — and, of course, they slowly fall in love. Rather than writing a creepy abuse-of-power-couched-as-true-love narrative, Jones instead portrays Margarit as aware of exactly how and why acting on her feelings would be wrong. It’s only when a catastrophe annihilates that power imbalance that the two finally act on those feelings.

I won't spoil the book, but I will say that Margarit and Barbara get a happy ending. That's important. Far too much media women who love women still centers on tragedy, rather than joy. Daughter of Mystery isn't pure fluff. Bad things happen, and just like in real life, things don't always work out perfectly. They're queer women in a fantasy Regency era society, and they have to deal with furious family members and the need for secrecy. But, they get to be happy. Together.

Alpennia is a glorious fantasy series for me, and I suspect for many other women with similar tastes. Barbara and Margarit aren't treated as a fantastical exception in the name of plausibility. Each novel in the series centers on the story of a Sapphic couple, and each couple manages to build lives for themselves while also dealing with treason, betrayal, and complex theological magic. In the world of Alpennia, women are allowed to be broken, to be angry, to be hurt, to be difficult, and still be worthy of love and support. They don't fix the patriarchy over night, but the characters don't retreat from view to hoard their happiness either. They try to make life better for other women on political and individual levels. The series offers everything I want from the queer community in real-life — except there are puffy dresses, swords, and magic.

If you are picking up Alpennia for the first time: Do check the pronunciation guide, as it will make your life easier. Please be warned that there is an attempted sexual assault in the first book, which may be triggering to some readers.

If you love it and want more of the same: Read anything by Cat Sebastian who writes m/m, f/m, f/f and genderqueer Regency romances. Plus, she’s as sensitive as Jones when it comes to subjects like trauma.

If reading Daughter of Mystery leaves you needing more Heather Rose Jones: There are three more books in the Alpennia series, and Jones has also written a handful of short stories and novellas, all of which feature queer women, that you can download for free from her website.

More like this
16 Novels That Paint A Realistic Portrait Of Abortion
By K.W. Colyard
5 Gripping Books To Read From Women’s Prize For Fiction Winner Ruth Ozeki
By El Hunt
At 14, Jenny Han Wrote Rom-Coms About Her Friends & Fan Mail To Leo DiCaprio
By Alyssa Lapid
10 Must-Read New Books Out This Week
By K.W. Colyard
Get Even More From Bustle — Sign Up For The Newsletter